1766 -1813. He was baptised on 4 March 1766 at Uffington, near Stamford in Lincolnshire, the third son of Charles Pierrepont and of his wife, Mary Hopkinson.

Pierrepont joined the Navy in 1780 and was commissioned lieutenant on 2 December 1789, serving as the fourth lieutenant of the Leander 52, Captain Joseph Peyton, and later, although the dates are unclear, as the first lieutenant of the Inconstant 36.

He went out to the West Indies at the end of 1793 as the third lieutenant of the Boyne 98, Captain George Grey, which ship flew the flag of Vice-Admiral Sir John Jervis in the Leeward Islands campaign from January 1794, and he was promoted commander of the cutter Sea Flower 14 on 19 May, being described as ‘very active’ in the services allotted to him by the commander-in-chief. Sent home with despatches announcing the capture on 12 April of Fort Fleur d’Epée, Guadeloupe, the Sea Flower was taken into harbour towards the end of May after arriving at Portsmouth.

Pierrepont was posted captain on 4 August 1794, and following Captain Mark Robinson’s appointment to the Scipio 64 in October he succeeded that officer in command of the frigate Brilliant 28. Initially he cruised in the North Sea with Rear-Admiral Henry Harvey’s squadron in search of French frigates which had been active against the British trade, and he was then based in the Downs.

In June 1795 he joined the Blonde 32, sailing from Portsmouth for the Mediterranean on 8 July with a convoy under the orders of Captain Cuthbert Collingwood of the Excellent 74, and reaching Corsica at the beginning of September. During April 1796 the Blonde was off Cadiz where she was sent in to reconnoitre the blockaded Rear-Admiral Joseph De Richery French squadron, and in August she arrived back at Portsmouth with Rear-Admiral Robert Linzee’s convoy, whereupon she went around to Chatham to be paid off. Shortly afterwards Pierrepont was presented to the King at a levee by the First Naval Sea Lord, Rear-Admiral James Gambier.

On 22 March 1797 he commissioned the newly launched eighteen-pounder frigate Naiad 38 at Deptford, but following the outbreak of the Nore Mutiny on 12 May his command was detained by her crew at Long Reach near the anchorage of the rebellious Lancaster 64. Pierrepont had the Naiad’s sails taken ashore to prevent the mutineers from sailing her to the Nore, and he also reported to the Admiralty a meeting he had witnessed between the reformist M.P. Samuel Whitbread and a leading mutineer at Purfleet. Following the conclusion of the Nore Mutiny he sat on the court martial of its leader, Richard Parker.

Upon returning to duty, the Naiad was attached to Admiral Adam Duncan’s North Sea fleet, but she unfortunately sprung her masts in late September and returned to the Nore with dispatches to be refitted, thereby missing the Battle of Camperdown on 11 October. At the end of the month she arrived at Elsinore with a convoy from the Nore, and on 5 November she departed the Baltic with between sixty and seventy sail to arrive in the Downs on 2 December were she remained for the next eighteen days. 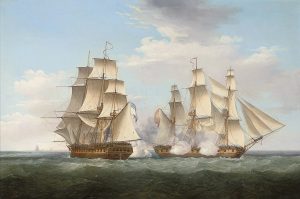 The capture of two Spanish treasure frigates by a British squadron in October 1799 netted Pierrepont a fortune.

During the early part of 1798 the Naiad cruised without success off Le Havre, and having briefly returned to Portsmouth she sailed in the last week of March to join Commodore Sir Richard Strachan’s squadron which was cruising off the coast of France. On 23 April, whilst in company off Brest with the Jason 38, Captain Charles Stirling, she captured the French gunboat Arrogante 6, and having briefly visited Plymouth in July she captured the Groix privateer settee Tigre 8 off Cape Finisterre after a four-hour chaser on 11 August, the prize being described as an ill-looking ship which had nevertheless been swift enough to escape the clutches of the British cruisers on several occasions.

On 22 August 1798 the Naiad fell in with the French frigate Décade 32, Captain Villeneuve, which was homeward-bound from Cayenne, and after a night-long pursuit she was joined the next morning by the Magnanime 44, Captain Hon Michael de Courcy. Between them they forced the Frenchman to surrender after a 36-hour chase, and the two frigates arrived in Cawsand Bay with their prize at the beginning of September. In October the Naiad cruised off Cape Finisterre before sailing for Limerick in a squadron consisting of three sail of the line and another frigate under the orders of Commodore Roddam Home, being in search of the French expeditionary force to Ireland.

At the end of November 1798 Pierrepont’s command returned to Plymouth where on entering the Sound she managed to carry away the mizzen mast of the Shark 16, Commander John O’Brien. On 14 December her boats rescued many survivors from the French prize Coquille 36 when that vessel was destroyed by fire, and in February 1799 she broke free from her moorings in the Hamoaze and grounded, although fortunately with little damage. To complete a calamitous few weeks in the Devonshire port she also ran afoul of the Mars 74, Captain John Manley, during a gale.

At the end of February 1799 the Naiad put out from Plymouth on a cruise in which she captured the Nantes-based privateer Heureux Hazard 20 off Lorient on 3 March, and she followed this up with the capture of a sloop and a brig laden with provisions for the Brest fleet. On 19 March she put into Plymouth with a hundred prisoners from the privateer whilst concurrently sending a smuggler into Falmouth, and on 15 April she sailed from Plymouth with dispatches for Admiral Lord Bridport in the Channel Fleet, with which force she remained for a few months whilst briefly returning to Plymouth in late June.

Over 16-18 October 1799 the Naiad joined the Ethalion 38, Captain James Young, and Triton 32, Captain John Gore, in forcing the surrender off Ferrol of the Spanish frigates Santa Brigida 36, Captain Don Antonio Pillon, and Thetis 36, Captain Don Juan de Mendoza. The two enemy vessels were returning from Santa Cruz with substantial treasure aboard, and Pierrepont’s personal prize fund was credited to the amount of £40,730, or two hundred and seventy times his annual salary, the equivalent of about £4m in today’s money.

Shortly after leaving Plymouth on 3 December 1799 following repairs to the Naiad, Pierrepont was taken ill to be temporarily replaced by Captain Hon. John Murray. Returning to duty in April 1800, he sailed under the orders of Admiral Sir Alan Gardner from Plymouth to join the Channel Fleet in Torbay. In the third week of June he embarked troops at Plymouth for the expedition to assist the French Royalists on the coast of France, his command was off Camaret Bay in September, and she returned to Plymouth at the end of October where Pierrepont left her on 10 November, his health being poor.

Thereafter he remained out of active service until the summer of 1807 when he joined the Zealous 74 with the blockading force off Cadiz. In early September 1808 this vessel came into Plymouth from Gibraltar with a convoy after leaving the Rock on 3 August, bringing with her the commissioner, Robert Gambier Middleton. After his ship had undergone quarantine Pierrepont resigned the command.

He was created a rear-admiral on 12 August 1812 and died on 7 August 1813 at Bramley, Surrey, being buried in St. Peters and St. Pauls Church in Godalming.

Pierrepont married Maria Salter, daughter of the late Captain Elliot Salter, of West-End House near Windsor on 28 March 1797 at St. Paul’s, Covent Garden, London, and had five children of whom just two survived to adulthood although all survived him. His residence was at Farley Hill, Bramley, near Godalming in Surrey, which was later known as Unsted Park. His widow retired to Bath after the estate was sold following his death and she survived him by fifty-one years.