1742-1815. He was the fifth of six children of Richard Edwards of Water Newton near Peterborough, and of his wife, Mary Fuller.

Having passed his lieutenant’s examination on 14 March 1775 but not been made, Edwards commanded the transport Viscount Falmouth in 1757. On 3 October this vessel sailed for Ireland and North America from Spithead, but a few days later she and two of her consorts parted from their convoy during a gale. The three vessels then fell in with a 26-gun French frigate which Edwards apparently put to flight through the bold use of the twenty-four 9-pounder cannons aboard his command.

He was commissioned lieutenant on 7 September 1759, during the spring of 1767 he was aboard the frigate Active 28, Captain Robert Carkett, and he later saw service in the American Revolutionary War aboard the Augusta 64, Captain Francis Reynolds.

Edwards was promoted commander on 22 April 1778, and for the remainder of the year had the bomb-ketch Carcass 8 in an acting-capacity, forming part of Vice-Admiral Lord Howe’s fleet at the defence of New York in July and in operations off Rhode Island during August. At the end of the year, he departed for the Leeward Islands with Commodore William Hotham’s squadron, and he was present at the Battle of St. Lucia on 15 December. 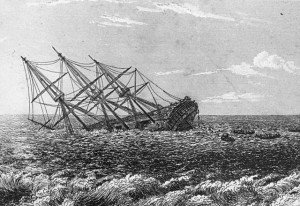 The wreck of the Pandora

He removed to the Hornet 14 in the Leeward Islands during June 1780, which vessel was sent home with Admiral Sir George Rodney’s and Major-General John Vaughan’s dispatches from St. Lucia dated 22 December, to arrive at Portsmouth on 5 February 1781.Two weeks later she entered harbour to be docked.

Edwards was posted captain on 25 April 1781 and during the following month he commissioned the new Narcissus 20 at Plymouth for service in the Channel Fleet. His command was in Plymouth Sound at the end of August, and she participated in the June-November campaign, capturing a small French vessel in September which had been sent to reconnoitre the British fleet. She went out to New York in January 1782 with dispatches and subsequently returned to that city after a brief voyage to the West Indies.

On 9 May 1782, having recently departed Charleston, some fifty members of the crew of the Narcissus planned to murder the officers, take control of the vessel, and hand it over to the Americans. Fortunately, the coup was thwarted, and after reaching New York twenty-five men were tried aboard the Assurance 44, six of whom were sentenced to hang and fourteen to be flogged. On 19 June the Narcissus arrived at Charleston with dispatches, in January 1783 she escorted troops and loyalist Americans to St. Lucia, and she eventually returned home to be paid off in March 1784.

Edwards remained unemployed until appointed to the Pandora 24 at Chatham in August 1790. She was in the Downs for some time from mid-October with Rear-Admiral Sir Richard King’s squadron, and she sailed from Portsmouth for the Pacific Ocean in November with instructions to seek out the mutineers, or as they were described in the Press, ‘the pirates’, who had taken the Bounty from Captain William Bligh on 28 April 1789.

Upon arriving at Tahiti on 23 March 1791, Edwards found fourteen men who had served on the Bounty. Chaining the innocent and guilty alike in an airless hellhole on his quarter-deck, he spent the next four months touring the Pacific in search of Fletcher Christian and the Bounty. His mission ended abruptly on 28 August when the Pandora sank in the Torres Straight with thirty-six deaths, but after taking to the boats Edwards delivered the survivors to Timor seventeen days later. During the voyage to the Cape aboard a Dutch ship, and from thence to England aboard the Gorgon 44, Commander John Parker, he ensured that the alleged mutineers continued to suffer imprisonment and a meagre diet. The Gorgon arrived at Portsmouth on 19 June 1792 and after going up to London, Edwards gave his deposition on the apprehension of the mutineers to the Public Office in Bow Street a fortnight later.

Following the court-martial into the loss of the Pandora presided over by Vice-Admiral Lord Hood aboard the Hector 74 in Portsmouth on 17 September 1792, Edwards and his surviving officers were exonerated of any blame for her loss. Thereafter, he did not see any further active service, but he was employed as the regulating captain at both Inverary and Hull.

Edwards reached flag rank on 14 February 1799, whereupon he relinquished his position at Hull. He was further promoted to vice-admiral on 9 November 1805, and admiral on 31 July 1810.

He died, unmarried, on 13 April 1815 at his brother’s house in Stamford, being buried in St. Remigius Church, Water Newton.

Although a fine seaman and of a ‘venerable’ appearance, Edwards was a martinet of the worst order, and was described as ‘unimaginative’. Opinions of him differed, especially as the influential Heywood family, whose loyal son he had treated harshly as a mutineer, led a furious campaign against him and possibly prevented his further employment. Equally his ‘beaching’ could have been on account of the affect to his health of the open boat voyage following the loss of the Pandora. His own officers apparently held him in high regard.