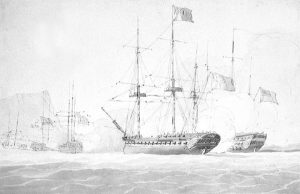 The Romney’s capture of the Sibylle in 1794

1769-94. Born on 22 December 1769, he was the second son of Henry Bayly Paget, the 1st Earl of Uxbridge, who died in 1812, and of his wife Jane nee Champagné. His brothers were Field-Marshal Henry Paget, the 1st Marquis of Anglesey, who was second-in-command to the Duke of Wellington at the battle of Waterloo, the diplomat Hon. Sir Arthur Paget, General Hon. Sir Edward Paget, Vice-Admiral Hon. Sir Charles Paget, and the Hon Berkeley Paget, a politician.

Paget joined the Navy in 1783 after an education at Westminster School, and having shortly before been presented to the King by his father he was promoted commander on 9 November 1790 of the Fury 16. He commanded this vessel out of Portsmouth during the spring of 1791 and attended the King at Weymouth in September. The Fury was paid off in the same month but then recommissioned to sail out from Torbay in October to the Mediterranean where she was stationed at the outbreak of hostilities with France in 1793.

Paget was posted captain on 6 February 1793, and having succeeded Captain William Domett aboard the Romney 50, which was already in the Mediterranean, he served at the occupation of Toulon from August.

On 17 June 1794 the Romney captured the excellent French frigate Sibylle 38 at Mykonos after sailing into the harbour and engaging her for upwards of seventy minutes. As a result of the engagement Paget’s command lost eight men killed and thirty wounded in return for French casualties of one hundred and fifty, with most of the surviving enemy escaping ashore upon their frigate’s surrender. During the same month the Romney took four French prizes whilst in company with the Leda 36, Captain John Woodley.

Captain Paget died at sea on 15 September 1794 off Minorca, reportedly from a re-opened wound that had been inflicted a decade earlier during an attack by a would-be assassin with a dagger in Constantinople, although contemporary newspapers stated that his death was as a result of injuries sustained during the capture of the Sibylle. He was buried in the convent on Gibraltar on 3 October.

Paget, who never married, was the M.P. for Anglesey in succession to his uncle, Nicholas Bayley in the Pitt interest from 1790 until his death.

Described as a pleasant, handsome man, but ‘not as droll as his brother Arthur’, he suffered frequent spasms and convulsions as a result of his long-standing wound.