Cooke entered the navy in 1773 aboard the cutter Greyhound, Lieutenant John Bazely, seeing service in the Channel, but then returned ashore to complete his education at a naval academy in Greenwich. Concurrently his name was entered to books of the royal yacht Katherine, Captain Alexander Hood, who would be his long-standing patron.

In 1776 he was accepted aboard Vice-Admiral Lord Howe s flagship Eagle 64, Captain Henry Duncan, participating in the occupation of New York from 3 July, the campaign against Philadelphia from 25 August 1777, the defence of New York in July 1778 and manoeuvres off Rhode Island in August. During the latter operations Lord Howe personally praised him for his bravery and suggested that he was already worthy of the rank of lieutenant. Whilst employed in North America he broadened his knowledge of the Navy with service aboard the frigate Liverpool 28, Captain Henry Bellew. 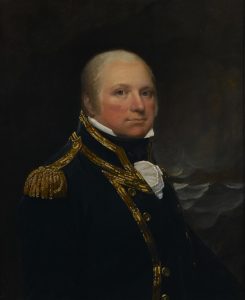 The Eagle returned to England in October 1778 and on 21 January 1779 Cooke was advanced to the rank of lieutenant aboard the Worcester 64, Captain George Talbot. Shortly afterwards he transferred to the flagship of Rear-Admiral Sir Edward Hughes, the Superb 74, Captain Robert Simonton, which departed for the East Indies in March. After service at Trincomale and Seringapatam Cooke was invalided home aboard the sloop Nymph 14, Commander John Sutton, which departed for England in January 1782. It has been stated that he joined the Duke 98, Captain Alan Gardner, serving in the West Indies, and that he was present at the Battle of the Saintes on 12 April 1782, although given that the Nymph arrived in England a month after that engagement this seems highly unlikely.

During the next couple of years Cooke remained unemployed whilst he recovered his health, and he then devoted a further year to learning the language in France. He returned home upon being appointed to the Expedition 44, Captain James Vashon, flying the broad pennant of Commodore Alan Gardner, which vessel set sail for Jamaica in May 1786. In due course Cooke became first lieutenant to Gardner aboard the Europa 50, but after almost three years service on the Jamaican station he again found himself invalided home, this time after a fall which saw him confined to his cot. Such was his incapacity that Gardner issued a certificate stating that Cooke should not be asked to undertake any further service in the West Indies.

During the Spanish Armament of 1790 he became third lieutenant of the London 98, Captain William Domett, bearing the flag of Vice-Admiral Sir Alexander Hood, and in February 1793, following the commencement of the French Revolutionary War, he accepted the post of first lieutenant to Hood aboard the Royal George 100, Captain Domett.

Cooke was promoted commander of the fireship Incendiary on 21 February 1794, which year saw his participation in the Battle of the Glorious First of June. On 23 June he was posted captain of the Monarch 74 in place of Captain Frank Sotheron who had been badly wounded by an exploding gun, and he went out to Newfoundland as flag-captain to Rear-Admiral Sir James Wallace before returning home with that officer at the end of the year. He was still commanding the Monarch at Plymouth in February 1795, but he left her after taking her around to Spithead in the following month to fit for the flag of Vice-Admiral Sir George Keith Elphinstone, it being considered by the First Lord of the Admiralty, Earl Spencer, that he was too young to command a ship of the line on the home station.

In August 1795 he received an appointment to the Tourterelle 30, which had been captured on 13 March by the Lively 32, Captain George Burlton, but when this vessel was ordered to the West Indies in the winter after a lengthy refit Cooke had to resign the command in accordance with Gardner s earlier certificate.

After several months on the beach he was appointed to the Nymphe 36 in May 1796, the crew of which frigate included many Cornish tin-miners who had entered at the start of the war out of loyalty for her then commander, Captain Sir Edward Pellew. During the King s summer holiday at Weymouth in August the Nymphe patrolled off that port under the orders of Captain Sir Harry Neale, and she then went out on a cruise from Portsmouth. Cooke took leave of absence from November to January with Captain Richard Lane acting for him, and on returning to duty he once more went out on a cruise from Portsmouth. On 9 March 1797 off Brest the Nymphe in company with the San Fiorenzo 36, Captain Neale, captured the French frigate Resistance 40 and the corvette Constance 22, which had recently landed a party of French adventurers in Fishguard Bay, although regrettably Cooke had to start a number of his crew in order to get them to fight. The Resistance was taken into the Navy and renamed the Fisgard in mockery of the French. 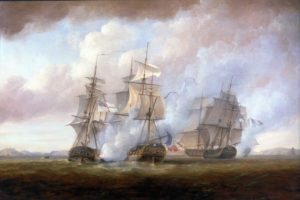 When the Spithead mutiny erupted on 16 April 1797 Cooke tried to support Vice-Admiral John Colpoys of the London 98 in subduing the potentially violent insurrection on his flagship, and in the aftermath he was put ashore by his own crew. Once the fleet returned to duty it was considered unwise for him to rejoin his ship as the Nymphe s men had charged him with cruelty, and almost without exception had petitioned for his discharge. Accordingly, Captain Percy Fraser replaced him in June.

In May 1799 Cooke was appointed to the newly commissioned Amethyst 38, serving in the Channel, and he conveyed the Duke of York to the invasion of the Netherlands in August. Cruising thereafter off the French coast, he captured the Lorient-based privateer brig Avanturier 14 in the Bay of Biscay on 29 December, the Bordeaux-based privateer cutter Vaillant 14 on 15 February 1800, the richly laden French letter of marque Modeste 16 on 24 February when in company with the Nymphe, Captain Fraser, and the impressive Bordeaux-based privateer Mars 22 off northern Spain on 31 March. He subsequently participated in Commodore Sir Edward Pellew s expedition to Quiberon Bay, and that of Rear-Admiral Sir John Borlase Warren to Ferrol during June – August.

Returning to his profitable cruising ground, he was soon earning more prize-money with his capture of a French East Indiaman in the late summer of 1800. His command later joined in the pursuit of the French frigate Dedaigneuse 36 when she was discovered off Portugal on 26 January 1801, although the Amethyst was outrun by the Oiseau 36, Captain Samuel Hood Linzee and the Sirius 36, Captain Richard King, which forced the enemy s surrender two days later. On the same day she assisted the Sirius in the capture of the Ferrol based letter of marque Charlotta off Cape Belem. Further captures were the privateer schooner Nostra Se ora Del Carmen 6 on 16 March, which was destroyed, and the French privateer General Brune 14, off Cape Finisterre on 5 April, which had been returning to Bordeaux from Guadeloupe with the governor of the island aboard. Briefly the Amethyst entered Plymouth before putting back to sea in May, and then returning to the Devonshire port in September.

In October 1801 Cooke, being somewhat reduced in health, took leave of absence, and he was replaced temporarily by Commander Henry Richard Glyn of the Scourge 16 who retained the Amethyst until the following May when Cooke briefly resumed command prior to her being paid off.

During the peace, and then following the resumption of hostilities with France, Cooke visited Bath and Harrogate for the improvement of his health, whilst the proceeds of an estate left to him by an uncle allowed him to purchase and develop a property in Donhead St. Andrew Wiltshire.

In October 1804 he was appointed flag-captain to the commander-in-chief at Plymouth, Vice-Admiral William Young, aboard the Salvador del Mundo 112, but he sought a more active position, and in April 1805 joined the Bellerophon 74, in which he sailed from Plymouth on 9 May to join the Channel Fleet. Days later he returned to port to take on stores and water prior to sailing for the Mediterranean in escort of General Sir James Craig expedition. Once on that station he served under the orders of Rear-Admiral Sir Richard Bickerton at the blockade of Cartagena in June before visiting Gibraltar, and by August he had become attached to Vice-Admiral Lord Nelson s fleet off Cadiz.

The Bellerophon was the fifth ship in Vice-Admiral Cuthbert Collingwood s line at the Battle of Trafalgar on 21 October 1805 and was soon in the thick of the action, losing two masts when temporarily outnumbered by the enemy, and then engaging in a ferocious battle with the Aigle 74. Weilding a pistol in either hand, Cooke shot down a French officer when the enemy threatened to board, but despite the lethality of the Aigle s sharpshooters he refused to remove his epaulettes, and being an obvious target he was killed by two musket balls in his right breast during the heat of the action, a death he would have called bowled out . His last words were remembered as let me lie quietly a minute and tell Mr Cumby never to strike. His first lieutenant did not strike, and despite the fact that the Bellerophon was greatly battered and suffered twenty-seven killed and one hundred and twenty-three wounded in the battle, she still managed to capture the Monarca and take possession of the Bahama.

He married Louisa Hardy, the fourth daughter of a diplomat, Josiah Hardy, and the niece of Admiral Sir Charles Hardy, at St. Leonard, Shoreditch on 15 June 1790. In the early days of their marriage the couple lived in an Essex cottage, and they had one daughter, Louisa Charlotte.

Cooke was six feet tall, coarse, strongly religious and exceedingly dark. Captain George Duff of the Mars, who also lost his life at the Battle of Trafalgar, was his lifelong friend. He was the uncle of Rear-Admiral John Duff Markland, who served with him aboard the Tourterelle, Nymphe and Amethyst. His patron was Admiral Lord Bridport.