1754-1814. He was born on 21 May 1754, the only son of Hon. Edward Francis Stanhope and his wife Catherine Brydges, the daughter of the Marquess of Caernarfon. He was a distant cousin of Admiral of the Fleet Sir Francis Austen, Rear-Admiral Charles Austen, and the novelist Jane Austen.

Stanhope was educated at Winchester College and Oxford University before entering the navy aboard the Rose 20, Captain Benjamin Caldwell, in May 1768 and serving on the North American station. After a short spell aboard the Romney 50 with the commander-in-chief, Commodore Samuel Hood, he returned to the Rose and thence to England. In the summer of 1772 he went out to the Leeward Islands under the flag of Vice-Admiral William Parry aboard the Chatham 50, Captain Charles Thompson, but his employment was terminated by illness and he returned home to pursue his academic studies. 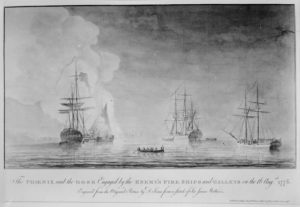 In March 1775 he sailed for North America aboard the Otter 14, Captain Matthew Squire, seeing action at the Battle of Bunker Hill before becoming an acting-lieutenant of the Glasgow 20 Captain Tyringham Howe. A short period of independent command followed when he was ordered to take a prize brig into Boston, and having used her to capture a schooner he then commandeered a sloop and captured a further two prizes which he carried into Newport, Rhode Island. Here he removed to the Rose 20 once more, which ship was now under the command of Captain James Wallace, and being placed in command of her tender he fought an inconclusive ninety-minute action with the privateer Hancock 14 that saw many of his crew incapacitated.

Whilst at Newport Stanhope accepted an order from his previous commander, Captain Howe, to go ashore in search of deserters from the Glasgow, during the course of which dangerous assignment he was assailed with a cutlass and taken prisoner. Having been initially incarcerated at Providence and from thence on parole to Northampton in Massachusetts, he engineered his escape with the future Rear-Admiral George Gregory when the conditions of their parole were altered. The two were re-captured at Middleton in Connecticut to be imprisoned once more at Northampton, but Stanhope escaped again nine months later with Robert Arnold, the master of the sloop Falcon, and after walking some seven hundred miles and living for weeks in disguise at Marblehead they eventually took a cartel to Halifax. Stanhope returned to England in March 1777, having been appointed an acting-lieutenant of the Liverpool 28, Captain Henry Bellew.

He was commissioned lieutenant on 10 March 1777, joining the Nonsuch 64, Captain Walter Griffith, in which he went out to North America once more, and where the galley Pigot 8 under his command led a force otherwise consisting of six boats under Captain Samuel Reeve that captured a rebel galley north of the Bristol Ferry on Rhode Island. He had this vessel but a short time as she was set alight at Newport on 5 August 1778 to prevent capture by the French during their attempt with rebel forces to occupy Rhode Island. Stanhope was then charged with taking despatches to Vice-Admiral Lord Howe by Major-General Sir Robert Pigot, a feat he heroically achieved by rowing a whale boat through the enemy fleet, hailing their flagship in French, and thereafter making good his passage to New York in most trying circumstances. On arrival at Sandy Hook he was taken aboard the Monmouth 64, Captain Thomas Collingwood, and in October returned to England aboard the storeship Leviathan, Captain John Brown.

In April 1779 he became the senior lieutenant of the Portland 50, Captain Anthony Hunt, going out to Newfoundland with the flag of Rear-Admiral Richard Edwards, and on 6 August 1779 he was promoted commander by Edwards and instructed to commission the ex-American privateer Trepassey 14, a vessel that he considered inadequate for service. Upon applying to the admiral for a transfer his senior s response so aggrieved him that he requested a court-martial, the result of which was described as highly honourable to him. Taking passage aboard the Fairy 14, Stanhope returned to England in the autumn of 1780.

In the spring of 1781 he took passage out to the Leeward Islands aboard the cutter Ranger, Lieutenant Alexander Hood, and after falling in with Admiral Sir George Rodney s fleet he was appointed to the fireship Salamander by that officer when they arrived at Barbados. He was posted captain of the Terrible 74 on 16 June 1781 before joining the Russell 74 shortly afterwards, which ship he fought at the Battle of St. Kitts on 25-26 January 1782. In the following month, suffering from ill health and apparently unlikely to survive, he exchanged with Captain James Saumarez into the fireship Tisiphone and returned to England with despatches.

He had recovered in time to command the Mercury 28 from September 1782, being engaged in convoy duty and paying her off before recommissioning her once more in April 1783 and sailing to Nova Scotia on 27 June with news of the peace. He spent the next three years on the Halifax station, during the course of which he and his officers were insulted and threatened by a mob when visiting Boston. He paid the Mercury off in July 1786, and returned to his academic studies.

After nearly a decade of unemployment, Stanhope joined the Ruby 64 at Spithead in September 1794, serving in the Channel before going out to the Cape in the following spring under the orders of Commodore John Blankett. On 19 June 1795 he was brought to a court martial on charges proffered by Lieutenant William Fitzwilliam Owen of wasting stores, behaving in a fraudulent and oppressive manner unbecoming the conduct of an officer, and of neglecting to supply his ship with the necessary slops. The court found the charges frivolous, malicious and ill-founded , and Stanhope was acquitted. Owen was then brought to a court-martial for his own behaviour and sentenced to be dismissed the service, although he was later re-instated and rose to flag rank. Stanhope subsequently served at Vice-Admiral Sir George Keith Elphinstone s capture of the Dutch ships in Saldanha Bay on 17 August 1795 before leaving for home with despatches in October and arriving back in England in February 1796.

In June 1797 he joined the newly-launched Neptune 98 which was being fitted out at Woolwich, and he flew the broad pennant of Commodore Sir Erasmus Gower during the Nore mutiny before that officer assumed command on 27 September. Following the resolution of the insurrection he sat on the court martials of a number of the Nore mutineers. He then briefly commanded the Spanish prize San Damaso 74 before she was laid up in November, and in June 1798 he joined the brand new Achille 74, serving with the Channel fleet. By now he was severely afflicted with a bilious colic which obliged him to retire ashore six months later, and he was employed thereafter in the command of the Cornwall and later the Devonshire Sea Fencibles.

Stanhope became a rear-admiral on 1 January 1801, was further promoted to vice-admiral on 9 November 1805, and flew his flag from that year in the River Thames aboard the Matilda 28, Lieutenant Thomas Dorsett Birchall, and, briefly, the Sybille 44, Captain Robert Winthrop.

He was second-in-command to Admiral Lord Gambier in the expedition which forced the submission of Copenhagen on 7 September 1807, flying his flag aboard the Pomp e 74, Captain Richard Dacres, and he was created a baronet in respect of this service on 13 November. Returning to home waters he flew his flag at Greenwich aboard the Thisbe 28, Commander William Rogers, before joining the Namur 90, Captain Alexander Shippard, as commander-in-chief at the Nore in 1811. He also sat on the court-martial of Admiral Lord Gambier following the Battle of the Basque Roads on 11 April 1809.

Stanhope was promoted a full admiral on 12 August 1812 and died at Clifton, Gloucestershire on 20 December 1814.

He married Margaret Malbone of Newport, Rhode Island, on 14 August 1783, having issue Captain Sir Edwyn Francis Scudamore Stanhope and four daughters. His address was given as Stanwell House, Middlesex.

A fluent French speaker, Stanhope was also renowned as a Hebrew scholar, and he translated the Old Testament. He suffered a good deal of ill health during his career which increasingly retarded his service at sea. In 1801 he was at Bath where his distant cousin, Jane Austen, described him as a gentlemanlike man, but then his legs are too short and his tail too long the latter a description of his big backside and old-style pig-tail.