c1759-1804. He was the son of Thomas Larcom and of his wife, Charity Banton, and was the elder brother of Rear-Admiral Joseph Larcom. The boys and their sister were orphaned in the early 1770’s and became the responsibility of a maternal aunt, who was herself the widow of a Lieutenant Hill of the Navy.

Thomas Larcom entered the Navy in the early 1770’s and was commissioned lieutenant on 25 February 1779.

During 1793 he was the first lieutenant of the Queen Charlotte 100, Captain Sir Andrew Snape Douglas, flying the flag of Admiral Lord Howe in the Channel Fleet, and he still held this position at the Battle of the Glorious First of June in 1794, in the midst of which engagement he was castigated by the commander-in-chief for his, albeit justifiable, criticism of the performance of the Caesar 80, Captain Anthony Molloy. Following the battle, he assumed command of the Montagu 74, whose captain, James Montagu, had been killed. Upon returning to Spithead, Larcom was summoned by Howe and informed that his conduct required him to leave the ship. Initially appalled, Larcom was then happily advised that this was for reasons of his being promoted commander, which advancement took effect from 23 June.

It seems likely that Larcom had the fireship Comet in the Channel Fleet for the next few months in 1794, although it has been reported elsewhere that his brother Joseph was her commander. On 21 October he was posted captain of the Belle Poule 36 for purposes of rank only, and it has been stated that he flew the flag of Rear-Admiral John Bourmaster aboard the Glory 98 from 23 October, although other sources advise that this position was held by Captain George Hopewell Stephens.

In the late autumn of 1794, Larcom was appointed to the acting-command of the Russell 74 for Captain John Willett Payne upon that officer being accorded the honour of conducting Princess Caroline of Brunswick to England for her marriage to the Prince of Wales, a task that was not completed until April of the following year. In February 1795 the Russell arrived at Portsmouth from Plymouth to join the Channel Fleet, and Larcom commanded her at the Battle of Groix on 23 June, suffering casualties of three men killed and ten wounded. Thereafter, the Russell continued to serve with the Channel Fleet, and although it is possible that Captain Payne temporarily returned to command her, Larcom was back at the helm by the beginning of October when she entered Plymouth in a distressed state after a lightning strike had killed her first lieutenant and three seamen, and had disabled her main and mizzen masts. 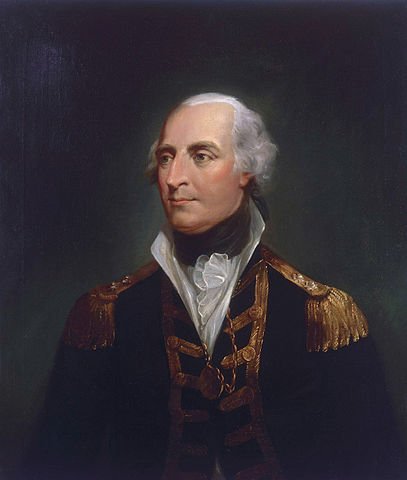 Captain Larcom spent a great deal of his career serving under Admiral Sir Roger Curtis, who was himself one of Lord Howe’s favourite officers.

Continuing with the Russell, in March 1796 Larcom served under the orders of Admiral Adam Duncan in the North Sea, and in May his ship flew the flag of Vice-Admiral John MacBride off the Texel. By July she was in the Yarmouth Roads, and on 30 September she arrived at Portsmouth from the North Sea.

In October 1796 Larcom commissioned the Prince 98 at Portsmouth for the flag of Rear-Admiral Sir Roger Curtis in the Channel Fleet, whose squadron paraded off Rochefort that autumn in an unsuccessful attempt to intercept Rear-Admiral Josef de Richery’s expedition after its raid on the Newfoundland fisheries. In December the Prince collided with the Sans Pareil 84, Captain William Browell, at Spithead during Admiral Lord Bridport’s much denigrated attempt to counter the French invasion of Ireland, and as a consequence the ship was docked at Portsmouth.

On 6 March 1797 the Prince worked out of Portsmouth Harbour for Spithead, and in continuing to fly Curtis’ flag she cruised off Ireland and Brest with that officer’s squadron. When the Spithead mutiny broke out on 16 April she rebelled with other ships of the squadron, but upon being restored to duty she supplemented Admiral Adam Duncan’s fleet for several months in the North Sea, although after returning briefly to Portsmouth, she was unable to rejoin Duncan before the Battle of Camperdown was fought on 11 October. The six months thereafter were spent in duties with the Channel Fleet until in April 1798 Curtis’ squadron sailed for Ireland to guard the Western Approaches.

In June 1798 the Prince carried Curtis’ flag out to reinforce the Mediterranean Fleet following Rear-Admiral Sir Horatio Nelson’s detachment, which would culminate in the Battle of the Nile, and she served at the blockade of Cadiz for the remainder of the year. At the end of January 1799, whilst still flying Curtis’ flag, she arrived at Portsmouth from Gibraltar with a small convoy.

Larcom removed to the Lancaster 64 on 24 March 1799 when his patron, Vice-Admiral Sir Roger Curtis, was appointed the commander-in-chief at the Cape, and after several delays they sailed for South Africa in September with a large convoy to reach the station via Madeira that December. In January 1800 five seamen were hung aboard the Lancaster at the Cape for mutiny, and from November she cruised off Mauritius as a private ship with the Adamant 50, Captain William Hotham, and the Rattlesnake 16, Commander Roger Curtis. During December 1801 it was reported at home that the Lancaster under Larcom’s command had relieved the Tremendous 74, Captain John Osborn, off the coast of Brazil, and she was back on the Cape station by January 1803.

Having exchanged with Captain William Fothergill into the Diomede 50, Larcom arrived at Portsmouth from the Cape via Lisbon on 27 May 1803 with a small squadron under Curtis’ orders, bringing with them a French East Indiaman valued at 80,000 guineas which had been sailing from the Isle de France to Flushing, and which they had captured off the Isle of Wight that morning upon learning that hostilities had recommenced with France.

In June 1803 the Diomede was ordered to fit out for immediate service, and after sailing on the 14th, Larcom commanded her with the flag of Vice-Admiral Sir James Saumarez in the Channel Islands. In October she was ordered to blockade Le Havre, and she returned to Portsmouth in early November to enter harbour for a refit a week later. Shortly afterwards, the terminally ill Larcom was succeeded in command by Captain Hugh Downman.

Captain Larcom died in his house at Gosport on 24 April 1804, and he was buried in nearby Alvestoke.

He was unmarried. At the time of his death he had a small property at Hythe near Southampton in which he intended to provide a home for his sister and two cousins. The property was inherited by his brother, Joseph.

Apparently, Larcom was an admirer of the French Revolution and allegedly of the radical political activist, Thomas Paine. A lively character who was well-read and inventive, he was appointed to the Prince as it was considered that he, above most other contemporaries, was qualified to ascertain the effectiveness of her lengthening and the installation of a first-rate’s masts. During his long career he was only out of employment for less than twenty months.