Burney joined the navy at the age of ten as a captain s servant aboard the Princess Amelia 80, Captain John Montagu, serving in Admiral Sir Edward Hawke s grand fleet and removing with his captain to the Magnanime 74 in June 1762, again serving under Hawke until the end of the year. 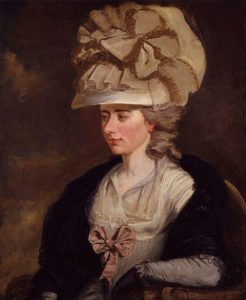 Burney came from a famous literary family, the most renowned of whom was his sister, Fanny Burney, Madame d’Arblay

From 1763-5 he saw service off Scotland aboard the Niger 32, Captain Sir Thomas Adams, and at the beginning of 1766 he joined Captain Richard Onslow aboard the Aquilon 28, being employed off North America and in the Mediterranean until the summer of 1769. He then undertook a voyage in an East Indiaman, going out to the sub-continent in February 1770 and returning home in May of the following year.

From 1772-5 Burney sailed as a midshipman aboard Captain James Cook s Resolution during the great explorer s second voyage around the world, being commissioned lieutenant of her consort Adventure, Captain Tobias Furneaux, on 17 April 1773. After a short spell serving off North America with the Cerberus 28, Captain John Symons, he sailed with Cook on his third voyage of discovery from 1776, and he brought home the Discovery in October 1780 after the deaths of both Cook on 14 February 1779, and subsequently of Captain Charles Clerke.

He was promoted commander with seniority from 2 October 1780, and in November 1781 took the new Latona 38 to Norway as a temporary replacement for Captain Lord Hugh Conway, commanding her for three months in what proved to be a fretful, fruitless and frustrating cruise.

In March of the following year Burney recommissioned the Bristol 50, and having been posted captain on 18 June 1782 he took her out with the fleet to relieve Gibraltar on 18 October, and from thence sailed to the East Indies with a convoy. On 19 April 1783 nineteen of the Bristol s crew were amongst two hundred people who lost their lives when the East Indiaman Duke of Athol blew up in the Madras Roads. The Bristol subsequently fought at the Battle of Cuddalore under Vice-Admiral Sir Edward Hughes on 20 June where she suffered ten men wounded, but shortly afterwards Burney was obliged to return home in poor health.

Despite his desire to serve, he was offered no further employment because of an apparent history of insubordination and his unpalatable republican views. Instead he retired to Mickleham in Surrey to become an author, assisting his friend Captain William Bligh in his narrative of the mutiny on the Bounty and, with the encouragement of Sir Joseph Banks, producing his own monumental work on exploration as well as other publications regarding the game of whist, the eastern discoveries of the Russians, and a history of the buccaneers.

Burney died suddenly of an apoplectic fit at his house in James Street, London, on 17 November 1821. At the time he held the rank of rear-admiral on the retired list, a promotion that had been made following an intervention by the Duke of Clarence. He was buried at St. Margaret s, Westminster.

He married Sally Payne, daughter of a bookseller, on 6 September 1785 at Chaffington, Surrey, and had three children of whom one daughter died at the age of seven. He separated from his wife in 1798 and lived with his half-sister, Sarah, before returning to the family in 1803. During 1792 he inherited a house at 26 James Street, London.

Known as Jem , his sister described the young Burney as honest, generous, sensible and unpolished , with a lively nature and a strong sense of humour and jollity. Clearly he was a popular shipmate, being professional in his duties but good company below decks. He had a yearning for learning and an impressive intellect that he always sought to improve.

A member of the Royal Society, Burney was regarded as a scientific and skilled seaman who treated his men humanely, yet was not afraid to question his superiors. When the Tahitian Omai was brought to England Burney acted his interpreter. A renowned whist player, he was a friend to many of the great literary figures of his day including Samuel Johnson and Charles Lamb.