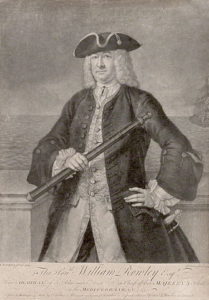 Watson was the great-nephew of Admiral Sir William Rowley who did much to foster his early career.

Watson was commissioned lieutenant on 6 September 1759.

During the latter half of 1779 he commanded the sloop Cameleon 14 in the Leeward Islands. He was posted captain on 17 January 1780, and having joined her in March commanded the Conqueror 74 with the flag of his uncle, Rear-Admiral Joshua Rowley, at the Battle of Martinique on 17 April 1780 where his ship lost thirteen men killed and thirty-six wounded.

During the further engagements in the Leeward Islands campaign Watson was mortally wounded when he lost his arm with a skirmish with the French on 19 May.

Hailing from Topsham, Devon, Watson married Mary Burges who was also from that town, and who died in 1774. Following Watson s death his mother-in-law, also named May Burges, was granted a pension of 20 to maintain and educate the orphaned children.

He was a prot g of Admiral of the Fleet William Rowley, Admiral Sir Joshua Rowley, and a friend of the latter officer s son the future Admiral Bartholomew Rowley. His will specifically requested Bart Rowley, at that time a lieutenant, to take notice of his child in remembrance of me, – should my little son chuse the navy .