1741-1810. He was the son of the Reverend Alexander Douglas of Baads in Midlothian, and of his wife, Isabel Houston.

Douglas was commissioned lieutenant on 17 June 1760, and after being promoted commander of the Camelon 14 on 19 September 1777 went out to Jamaica in December. He appears to have retained the command until he was posted captain on 5 April 1779.

Having been appointed to the Terrible 74 in December 1779, he commanded her at the Moonlight Battle off Cape St. Vincent on 16 January 1780, and took on board Captain John Harvey to pilot the relief fleet in to Gibraltar later that month. He then commanded the Terrible in Admiral Sir George Rodney s action with the French fleet at the Battle of Martinique on 17 April, but his ship did not suffer any casualties. Nevertheless he was one of five captains praised by Rodney for his part in the action, much to the detriment of his divisional commander, Rear-Admiral Hyde Parker, who Rodney denigrated.

As a result of the re-organisation of Rodney s captains following the death of Captain Hon. Henry St. John in the Battle of Martinique Douglas transferred to the Venus 36, participating in the remainder of the Leeward Islands campaign from May to July 1780, and briefly flying the flag of Admiral Rodney. During the Great Hurricanes of October the Venus lost all her masts bar the mizzen, finding sanctuary in Antigua. Following the capture of St. Eustatius on 3 February 1781 the Venus returned home with despatches. 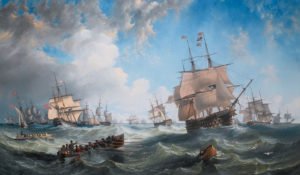 Somewhat surprisingly, Douglas finished his career as second-in-command in the Channel Fleet having barely been employed for the previous twenty years.

In January 1782 Douglas recommissioned the Vigilant 64 to serve in the Channel Fleet, being employed under the orders of Rear-Admiral Richard Kempenfelt during the April – August campaign. He retained her for the rest of the year, serving at the relief of Gibraltar on 18 October and in a small cruising squadron commanded by Captain John Harvey immediately afterwards.

For a short period from October to December 1794 he commanded the Irresistible 74 in succession to the promoted Rear-Admiral John Henry, this ship being paid off in the latter month.

Douglas was advanced to flag rank on 1 June 1795, and was promoted vice-admiral on 1 January 1801. Despite his many years of unemployment he briefly served as second in command of the Channel Fleet under Admiral Hon. William Cornwallis with his flag in Hibernia 110, Captain William Bedford, during the time of Lord Barham s stewardship of the Admiralty in 1805-6.

He married his cousin Charlotte Douglas, the only daughter of John St. Leger Douglas of Chelmsford, Essex, who served as an M.P from 1768-83, and had property in the West Indies. The marriage produced no issue.