When Admiral Sir George Rodney sailed for North America in the early autumn, he despatched ten sail of the line under Rear-Admiral Joshua Rowley to reinforce Vice-Admiral Sir Peter Parker at Jamaica, and left another six under the command of Commodore William Hotham on the Leeward Islands station. His intention was to provide some security for the British Caribbean islands against any possible French aggression, but it would be the forces of nature in the form of the Savanna-la-Mar Hurricane and the Great Hurricane of the Antilles that would present the greatest threat to the rich British possessions.

The Savanna-la-Mar hurricane began brewing off the coast of South America at the beginning of October, and it quickly swept northwards through the western Caribbean to hit Jamaica. The town of Savanna-la-Mar was destroyed on 3 October; hundreds of people lost their lives in Montego Bay and Lucea, and a British transport, the Monarch, was lost with several hundred Spanish prisoners aboard her whilst sailing from Savanna-la-Mar to Kingston. Operating out of the Jamaican station, the sloops Victor 14, Commander George Mackenzie, and Barbadoes 14, Commander Ralph Milbank, were lost, as was the Scarborough 20, Captain Samuel Hood Walker, which was under orders for the Spanish Main but was never seen again. 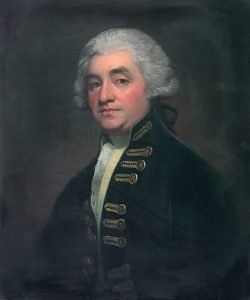 At 5.30 a.m. on 4 October the Phoenix 44, Captain Sir Hyde Parker, was caught in the hurricane ten miles west of Cape Cruz, Cuba. Her mainmast went overboard taking twenty men with it, but on the point of foundering the ship providentially drove onto the rocks whereupon her men were able to scramble ashore before she broke up. Once the weather abated Parker got stores, ammunition and four cannonades up from the wreck, allowing the two hundred and forty survivors to fortify an encampment ashore. The first lieutenant, Benjamin Archer, was despatched in one of the few surviving boats for Montego Bay, and on the 11th he returned with the sloop Porcupine, Captain Benjamin Hulke, and three shallops to embark the castaways. After demolishing their fort the men were carried back to Jamaica, arriving in Montego Bay on 15 October.

On 24 October the Pomona 28, Captain Charles Nugent, struggled in to Port Royal minus her mizzen mast, and with her bowsprit and foremast sprung, whilst the Ulysses 44, Captain Thomas Dumaresq, also got back to Jamaica on the 26th with only her foremast standing, having jettisoned all her upper deck guns. But then on the same day Rear-Admiral Rowley came in, and the sheer extent of the brutality of the Savanna-la-Mar hurricane became evident.

Having escorted the trade part of the way to England, Rowley had been off the north-east coast of San Domingo on 5 October with the Grafton 74, Captain William Affleck, in which he was flying his flag, the Thunderer 74, flying the broad pennant of Commodore Hon. Robert Boyle Walsingham, the Berwick 74, Captain Hon. Keith Stewart, Hector 74, Captain Sir John Hamilton, Ruby 64, Captain John Cowling, Stirling Castle 64, Captain Robert Carkett, Trident 64, Captain John Thomas, and Bristol 50, Captain Tobias Caulfield. After the winds had increased in intensity throughout the afternoon, the hurricane had enveloped his ships at midnight. Commodore Walsingham s Thunderer disappeared without trace, whilst the Stirling Castle was driven ashore on Silver Keys, Cap Francois, with the loss of all her officers and crew bar a midshipman and four seamen. The Grafton, carrying eleven feet of water in her well, only survived when twenty-five volunteers bravely cut away the wreckage of her main and mizzen masts, although all aboard retained the expectation that she would founder at any moment. The Hector, Trident, Ruby and Bristol with barely a mast between them, and with many broken bones amongst their crews, all survived to reach Jamaica with Rowley, but the Berwick was so badly damaged that she had to flee all the way across the Atlantic before eventually reaching the safety of Milford Haven in Wales.

Meanwhile on the eastern arm of the Caribbean the Great Hurricane of the Antilles hurtled in from the north-east towards St. Lucia on the night of 9 October. By the following morning the storm had increased, in Commodore Hotham s words, to a degree of violence that is not to be described , and it was later claimed that the winds exceeded an astonishing 200mph. Sweeping the Careenage, the hurricane wreaked havoc at sea and ashore, where the barracks and other buildings were smashed to smithereens. Despite their preparation, the 74 s Ajax, Captain John Symons, Egmont, Captain Robert Fanshawe, and Montagu, Captain John Houlton, together with the frigate Amazon 32, Captain Hon. William Clement Finch, were all torn from the harbour and thrust out to sea. The pennant ship Vengeance was ripped from her moorings and thrown onto the rocks at midday alongside a number of transports and the Saint Vincent, 14, Commander George Wilkinson. Her masts were cut away and a number of guns cleared over the side, but only a change in the wind, albeit to an even increased velocity, enabled her stern to break free from the land. 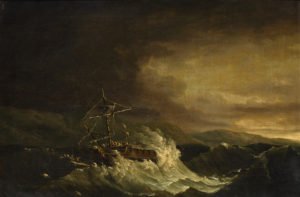 Towards midnight the winds began to abate, and by the morning of the 11th the weather was calm again. During the next day the totally dismasted Montagu reappeared, and with eight feet of water in her well she was assisted back into the Careenage. It took another eight days for the Ajax to return, bearing only her foremast and but a stump for a mainmast, whilst the Egmont made it to Jamaica on the 28th without a mast standing. The Amazon miraculously survived despite the loss of all her masts, and having seen twenty men drown. At one point she had become overset to such an extent that her wheel had slid under the waves, and Captain Finch and many of his crew had found themselves clinging on to the side of their ship.

Another two vessels which had been in Gros Islet, St. Lucia, were also wrought from their anchorage and sadly neither survived, the Chameleon 14, Commander James Johnstone foundering at sea, and the Deal Castle 24, Captain James Hawkins, eventually being lost on Puerto Rico, although with the loss of just three men. Commander John Drummond and all but seventeen of his crew were lost when the Beaver s Prize 14 was wrecked off the island.

The Andromeda 28, Captain Henry Bryne, overset some twenty miles to the west of Martinique, and the Laurel 28, Captain Thomas Lloyd, drove ashore and was smashed to pieces on the French Island, with all but thirty-one seamen losing their lives in the dual shipwreck. Displaying a chivalry that would not extend into the next war, these men were returned to St. Lucia on the 25th by the governor, the Marquis de Bouill , whose letter to Commodore Hotham stated that he did not believe it honourable to imprison men who had lost their liberty through the calamity of the weather, and that he was only sorry that more men, and in particular the officers of the ships, had not been saved.

Despite being given up for dead by one of the survivors of the Andromeda who had seen her in apparently terminal distress, the Endymion 44, Captain Philip Carteret, reached Jamaica on the 29th with only her foremast standing, having in her company a French victualler and a French transport that had both been forced out of St. Pierre, Martinique. The Venus 36, Captain John Leigh Douglas, was driven with but a mizzen mast standing to Antigua, as was the Alcmene 32, Captain James Brine. Unfortunately the Blanche 32, Captain Samuel Uppleby, which had left St. Lucia on the morning of the 10th with the Alcmene, was lost with all hands off Antigua. Another ship, the Conqueror 74, Captain Walter Dickson, which had sailed for Jamaica to collect a convoy, took three months to reach home, losing her mainmast on the way, and having a hundred men bale her out every day once her pumps had become choked. On the French side the frigate Junon 40 was wrecked on the island of St. Vincent.

The Great Hurricane of the Antilles is to this day the most potent and deadliest ever to hit the West Indies. It accounted for the lives of over twenty-two thousand people, including some four thousand on Barbados, six thousand on St. Lucia, and nine thousand on Martinique, off which a French convoy of sixty vessels under the escort of two frigates was shred asunder with the loss of many troop transports. These numbers were in addition to the estimated three thousand people who had been killed in the Savanna-la-Mar Hurricane.

After returning to Barbados from North America on 6 December, Admiral Rodney, in some shock at the devastation to the beautiful island and its docks, found that the damage to Hotham s squadron had left him with just nine serviceable sail of the line, none of which had spare rigging or sails. Even so, his attempt to coerce Vice-Admiral Sir Peter Parker at Jamaica to make the Port Royal dockyard facilities available to his damaged vessels was rebutted after Parker took great exception to his haughty attitude. Fortunately reinforcements from England arrived in the following month under the command of the capable Rear-Admiral Sir Samuel Hood, and this force would bring the Leeward Islands fleet back up to strength for the forthcoming 1781 campaign.

Post ships and their commanders lost in the October Hurricanes:

#Dismasted on voyage out and returned immediately to England.

*Resigned command before sailing to be succeeded on arrival in Leeward Islands by Captain James Brine.