1739-88. He was the youngest of seven sons and fourteen children of the M.P. Sir James Johnstone Bt. of Westerhall, Dumfriesshire, and of his wife Barbara Murray, the daughter of the 4th Lord Elibank. He was the brother of Commodore George Johnstone, whilst a number of his other brothers served in parliament, the East India Company, or accumulated great wealth. 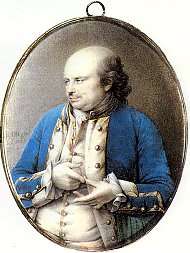 Gideon Johnstone was the brother of the controversial Commodore George Johnstone

Johnstone saw early service in the mid-1750 s with his brother George aboard the Biddeford 20, Captain Hon. Robert Digby, and he was commissioned lieutenant on 26 December 1758. He then went out to the East Indies as a merchant where he joined the army of the East India Company, at the same time becoming a businessman who reputedly sold water from the holy Ganges to Hindu pilgrims. After travelling all around the Indian Ocean he returned to the navy.

In November 1779 Johnstone commissioned the brand new Adamant 50, sailing in June 1780 from Liverpool to Plymouth before continuing to New York with the trade. He commanded the Adamant in the Battle of Cape Henry on 16 March 1781, and again at the Battle of Chesapeake Bay on 5 September, but left her during the winter and was not thereafter re-employed.

Johnstone died of a fistula at Hawkhill, Edinburgh on 12 May 1788.

On 13 March 1780 he married Frances, the eldest daughter of Scrope Colquitt, a lawyer and slaver from Liverpool. The couple had no issue. She suffered increasingly from mental health problems over the next few years, brought on either by syphilis, peculiar domestic situations , or by a religious fervour, perhaps all three. Her husband was mentioned as being attentive to her, but by 1785 he believed she was totally insane and at imminent risk of death. Family legend has it that earlier in 1779 Johnstone had married the teenage actress Dorothea Jordan, who later had many children with the Duke of Clarence before he became King William IV.