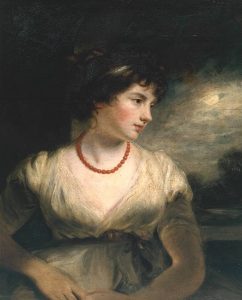 Captain Scott was the brother of the notorious Countess of Oxford.

Died 1807. He was the son of the Reverend James Scott of Itchen Stoke in Hampshire, and of his wife, Jane Elizabeth Harmood. Amongst several siblings was Jane Elizabeth Harley, the Countess of Oxford, whose liaisons with the reformers and progressives of the Georgian period, including the poet, Lord Byron, were considered to be excessive, even for those liberal times.

Scott was commissioned lieutenant on 28 July 1796, seeing service at some point in the French Revolutionary War as the first lieutenant of the frigate Solebay 32, and he was one of many officers who were promoted commander on 29 April 1802.

On 22 January 1806 he was again one of a number of officers who were posted captain, and in July at Chatham he joined what would seem to be the only ship he was ever to command, the sixth-rate Boreas 22, which had recently been launched at Yarmouth. She sailed for the Nore on 10 July and a week later departed for Leith before leaving early in the following month for Yarmouth. By 10 October she was back at Sheerness for a brief visit before going around to Portsmouth three days later to begin fitting out for foreign service. On 20 November she sailed from the Hampshire port for a week-long cruise, and she put out again on 13 December for another cruise from which she returned on Boxing Day, having earlier sent in a smuggling cutter. The Boreas then enjoyed another cruise from Portsmouth in early January 1807.

At the end of January 1807, the Boreas sailed for Guernsey, from where she entered Plymouth at the beginning of March. Days later she went out again for the Channel Islands, prior to returning to Portsmouth on 6 August. Here she collected a convoy for Guernsey and Jersey, for which islands she departed on 2 September. A month later, on 2 October, she captured the Morlaix privateer Victoire 8 after a four-hour chase, which vessel she sent into Portsmouth along with an American brig that had been the privateer’s prize. On 3 November the Boreas entered Portsmouth herself after being blown off her station at Guernsey, and once the weather had moderated she put to sea for the Channel Islands on 8 November.

On 28 November 1807 the Boreas ran aground in heavy winds on the Hanois Rocks off Guernsey whilst heading inshore to land five men who she had earlier picked up from an open fishing boat in the Channel. Within hours she overset on the incoming tide, and despite the efforts of the men at the pumps and the cutting away of her masts she became a wreck. Four boats were launched and did reach safety, aboard which were the second lieutenant and lieutenant of marines with about forty men, whilst another group of men were reportedly taken off the rocks the next morning, resulting in about sixty survivors in total. Captain Scott lost his life aboard the wreck with some ninety of his officers and crew, and reportedly his wife.

Scott was highly valued by Vice-Admiral Sir James Saumarez, who at the time of the wreck of the Boreas was the commander-in-chief at Guernsey. As a child, he and his siblings were taught to favour the French Revolution and reform.