1754-1816. He was baptised on 13 November 1754, the son of Charles d Auvergne, an army officer of Elizabeth Castle, Jersey, and of his wife, Elizabeth Le Geyt, who died in the weeks after the birth. The family formed the Jersey branch of the descendants of a cadet of the house of the Duc de Bouillon. His half brother was Captain Corbet James d Auvergne.

In 1770 d Auvergne s name was entered to the books of the royal yacht Mary, Captain John Campbell, and two years later he joined the Flora 32, Captain George Collier, serving in foreign waters as a midshipman and visiting the Baltic where he apparently made an excellent impression when introduced to Catherine the Great. After returning to England to be paid off he studied mathematics in London, and in 1773 he joined the bomb Racehorse, Captain Hon. Constantine Phipps, which sailed with the Carcass in the famous expedition to the Arctic Circle.

In 1774 he joined the Asia 64, Captain George Vandeput, going out to North America. Being attached to the army, he reached Concord on the occasion of the historic skirmish at Lexington on 19 April 1775, and in June he witnessed the Battle of Bunker Hill from his ships boats.

Later in the summer d Auvergne became an acting-lieutenant of the sloop Kingfisher, Captain James Montagu, and thereafter joined the Preston 50, Captain Samuel Uppleby, flying the broad pennant of Commodore William Hotham on the North American station. In October he was slightly wounded at the destruction of the town of Falmouth. Further service came aboard the Chatham 50, Captain John Raynor, flying the flag of the commander-in-chief, Rear-Admiral Lord Molyneux Shuldham, and he was with the same vessel under Commodore Sir Peter Parker and Captain Tobias Caulfield at the capture of New York from July to October 1776, during which campaign he commanded a division of boats. He later performed well again in a liaison role during the campaign that saw the capture of Rhode Island on 8 December. 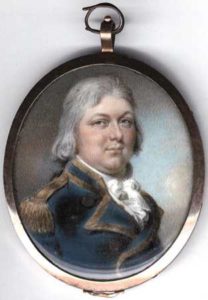 d Auvergne was commissioned lieutenant at Rhode Island on 2 July 1777, and he was appointed to the recently purchased armed vessel Alarm in October by the new commander-in-chief, Vice-Admiral Lord Howe. After participating in a raid up the bay under Captain Samuel Reeve on 24 May 1778 he was forced to destroy the Alarm in the Seaconnet River following the arrival of a detachment of the Comte d Estaing s French fleet on 30 July. Thereafter he served ashore with the Naval Brigade.

Returning to New York and thence to England, he became first lieutenant of the Arethusa 32, Captain Charles Holmes Everitt, seeing duty in the Channel. On 19 March 1779 the frigate went aground on the island of Mol ne following a two-hour engagement with the French frigate Aigrette 32, Captain La Bretonni re, and the crew were taken prisoner. Whilst confined at Carhaix near Brest, d Auvergne was identified as a distant relative of the Duke de Bouillon, and after visiting the nobleman at the Chateau Navarre he was exchanged through this connection in the following spring.

Upon returning to England he was appointed to the cutter Lark 16 in June 1780, being employed in the Channel where he took the privateer Chevalier de Fitzjames on 26 August, and in convoy duty to the Baltic and Scotland. Although his command next formed part of Commodore George Johnstone s expedition to capture the Cape, she was detached to Madeira on route and was thus not present at the controversial Battle of Porto Praya on 16 April 1781. Subsequently the advanced squadron, of which the Lark was a part, captured a rich Dutch East Indiaman on 1 July, from whose passengers d Auvergne received vital intelligence as to the presence of a Dutch East Indiaman squadron in Saldanha Bay. After participating in the attack on this squadron three weeks later the Lark proceeded to Madras with a convoy and several other men-of-war from Johnstone s squadron.

Having rendezvoused with Johnstone at St. Helena on the return voyage, d Auvergne was promoted commander on 21 August 1781, and he exchanged with Commander Peter Clements into the cutter Rattlesnake 14. In company with the Jupiter 50, Captain Thomas Pasley, the Rattlesnake was sent to investigate whether the barren two mile wide island of Trinidade, some seven hundred miles off Brazil, would be viable as a staging-post for the East India trade. On 21 October d Auvergne attempted to club-haul the Rattlesnake when she ran into difficulties during a heavy storm, but instead she struck a submerged rock and was run ashore with four fatalities. When shortly after the wreck Johnstone arrived at the island, he declared against the better judgement of his subordinates that Trinidade was a jewel fit to adorn the British crown , and d Auvergne thus agreed to remain with thirty British seamen, twenty French prisoners and a woman. A supply ship brought some replenishment of stocks in January 1782, but thereafter the colonists appear to have been forgotten, and it was only by good fortune that the Bristol 50, Captain James Burney, and a convoy of outward bound East Indiamen alighted on the island on 27 December 1782 to rescue the party, who until then had been obliged to survive upon seabirds. After being carried to Madras, d Auvergne was exonerated for the loss of the Rattlesnake, and upon eventually returning to England with Vice-Admiral Sir Edward Hughes despatches he was posted captain on 22 January 1784

Back in a peaceful Europe d Auvergne undertook the Grand Tour from 1784-7, one benefit of which was the restoration of a constitution that had suffered greatly on Trinidada, and another being the opportunity to visit several German universities. In 1786 he was adopted by Godefroy de La Tour Auvergne, the 6th Duke of Bouillon after he had spent the winter at the duke s residence in Normandy, a link having been proved between the two families following the earlier meeting during d Auvergne s imprisonment in France. This adoption, although not formalised until 1791, meant that upon the death of the duke s disabled and heirless son d Auvergne would inherit the title Duke of Bouillon. Until that date he would be known as the Prince of Bouillon.

From April 1787 he commanded the Narcissus 20 off France, in which he gathered intelligence of the coastline between St. Malo and Le Havre. He was forced to resign his commission through ill health in January 1790, whereupon he spent his convalescence with his new family in France. During 1792 he took the opportunity to visit a number of French ports, and he procured agents who would later prove to be of great use. By now however the French Revolution was in full swing, and following his return to England the duchy was ransacked by the Jacobins, whilst in December 1793 the old duke died.

Following the commencement of the French Revolutionary War in 1793 d Auvergne ran many agents and smuggled counterfeit money into France from his pennant ship Nonsuch 64, which he commanded at Jersey from June to December 1794, and thereafter from a residence ashore. Under his command a number of gunboats protected the Channel Islands until they were later replaced by three armed vessels, and he was also responsible for funding French Royalist migr s, although his apparent largesse and independence did not sit favourably with some of his fellow islanders. Throughout the remainder of the decade, and with a broad pennant granted him in 1798 flying on the floating battery Bravo 16, he was employed as the commander-in-chief at Jersey.

The Duchy of Bouillon

In August 1802, during the brief period of peace, d Auvergne visited Paris to claim his inheritance following the death of the disabled and heirless 7th Duke of Bouillon on 3 March. Instead he was arrested in September and interrogated by the personal secretary of the dreaded M. Fouch before being imprisoned in the Temple for several days. The French authorities interest in him was on account of the intelligence operations he had run in the previous war, but fortunately the British ambassador was able to obtain his release, and he was peremptorily instructed to leave France within twenty-four hours.

He resumed his position at Jersey on the resumption of hostilities in 1803 with his broad pennant aboard the Severn 44, armed en-flute, and he continued to be active in arranging the landing of French agents on the enemy coast. On 21 December 1804 his command was wrecked following a violent north-easterly gale in Grouville Bay, Jersey, and although he was not aboard at the time, his brother, the senior lieutenant aboard the Severn, led the rescue of all three hundred men aboard.

On 9 November 1805 d Auvergne was promoted rear-admiral, and despite the fact that the authorities had began to consider that the intelligence emanating from his agents did not justify the expenditure involved, he continued to command the Jersey station, and from 1808 all of the Channel Islands, being further advanced to the rank of vice-admiral on 31 July 1810. He eventually retired from active service in 1812.

At the end of the war in 1814 he returned to France where he was accepted by the restored Bourbon Monarchy as the 8th Duke of Bouillon, but Napoleon s temporary re-emergence and defeat in the following year led to the formation of the Kingdom of the Netherlands, and this territory subsumed the duchy. To make matters worse a distant blood relation of the 6th duke then had his claims to the remaining Bouillon estates upheld and d Auvergne lost the lot.

Defeated by the ruination of his claims to the Bouillon Duchy, and bedevilled by a substantial debt, d Auvergne committed suicide at Holmes Hotel, 17 Parliament Street, London on 18 September 1816. He was buried in St. Margaret’s Church, Westminster

He had three illegitimate children with Mary Hepburn of St. Helier, Jersey, these being Mary Ann Charlotte, born in 1794, who in 1815 married Captain Sir Henry Prescott, Anne Elizabeth, born in 1800, who married Admiral John Aplin, and Philip, who died as a midshipman at Colombo in 1815 when serving aboard the Africaine.

d Auvergne was a Fellow of the Royal Society and many other scientific bodies. He was an able sketcher, an excellent mathematician, and a keen scientist who was meticulous in his administration. In addition to his fluent French he also spoke Dutch. Admiral Lord Howe was an early patron of his career. He had a Gothic residence on Jersey that boasted of a fine library and gardens that he opened to the public.