1741-1801. He was born at Rotherhithe, London, and baptised on 13 February 1741, one of nine children of a wealthy merchant, Stephen Blankett, and of his wife, Elizabeth Born*

Blankett volunteered for the navy and served as a midshipman to Captain Edward Hughes aboard the Somerset 64 in 1758, being present that year at the reduction of Louisbourg, and in the operations that captured Quebec a year later. On 16 April 1761 he was commissioned lieutenant, and in the same year he submitted a plan to the Admiralty regarding the exploration of a possible north-west passage to the Pacific Ocean. It has been stated in many sources that he was sentenced to death at Gibraltar on the count of murder shortly afterwards, and that he was pardoned.

After the peace in 1763 he was granted leave by the first lord of the Admiralty, Lord Sandwich, to visit St. Petersburg to gather intelligence on recent Russian discoveries in the northern Pacific around the modern Aleutian Islands and Alaska, and after returning home he compiled a detailed report for the Admiralty which advocated a close alignment to Russia. Sandwich made it plain that the visit had been undertaken without his official encouragement, and as he was also unable to assuage Blankett s desire to explore other parts of the Pacific the perceived slights prompted Blankett to supply one of the first lord s political opponents, the Earl of Shelburne, with information detrimental to the government.

In 1770 Blankett served with Captain Hon. Samuel Barrington aboard the Albion 74 in the Channel, and in May 1778 he became the first lieutenant of the Victory 100, Captain Jonathon Faulknor, which vessel was the flagship of Admiral Hon. Augustus Keppel in the Grand Fleet. 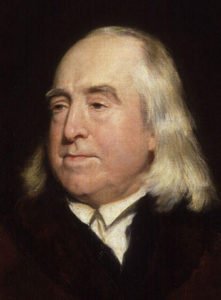 A somewhat complex character for a naval officer, Blankett was an associate of Jeremy Bentham, herewith pictured, although the renowned philosopher was not particularly complimentary about him!

Towards the end of 1782 he commissioned the new Thetis 38, and he took Commodore Sir Roger Curtis out to Gibraltar in the spring of 1783. Although paid off at the peace in May, the Thetis was immediately recommissioned and at the behest of the new commander-in-chief, Blankett’s friend commodore Sir John Lindsay, she served in the Mediterranean from the autumn remaining on that station until being paid off in May 1786. On one occasion Blankett was obliged to pursue and fire upon a Venetian 84-gun vessel after she had fired three shot at the Thetis when the frigate had entered Tunis, a port which the Venetians were blockading. During Blankett’s time in the Mediterranean the King of Naples occasionally took a cruise upon the Thetis and presented him with gifts, but despite this patronage and the wishes of the first lord of the Admiralty, Lord Howe, he was overlooked for the task of settling a convict colony in Australia in 1786, the role going to Arthur Phillip instead.

In 1790 Blankett commissioned the brand new Leopard 50, serving initially in the Channel and then escorting a convoy to China. After arriving at Macao during February 1791 in the company of the Thames 32, Captain Thomas Troubridge, he sailed for home with another convoy towards the end of March and was paid off at the close of the year.

In 1795 he hoisted his broad pennant as a commodore aboard the America 64, and having embarked five hundred troops he was sent to the Cape of Good Hope during March in command of a squadron consisting of the Stately 64, Captain Billy Douglas, Ruby 64, Captain Hon. Henry Stanhope, and Echo 16, Captain Temple Hardy, as part of an advance force to be commanded by Vice-Admiral Sir George Keith Elphinstone. He was later subordinate to this officer in the capture of the Cape on 16 September, and at the capitulation of the Dutch squadron in Saldanha Bay on 17 August 1796.

In 1798, having rejoined the Leopard, Captain Thomas Surridge, he was despatched to the East Indian station, and prior to receiving his notification of promotion to flag rank on 14 February 1799 he was sent to command the operations in the Red Sea against the French which had commenced with the instigation of a blockade of Suez in April 1799. During a brief return to Bombay in August 1800 the Leopard captured the prolific French privateer Clarisse 18, which until a few months previously had been commanded by the renowned Robert Surcouf.

In 1801, with his flag still aboard the Leopard 50, Captain Surridge, Blankett s squadron consisting of this vessel, two frigates and several other smaller craft, was sent from Bombay by the commander-in-chief in the East Indies, Vice-Admiral Peter Rainier, to land troops at Suez. The plan was to assist in driving the French out of Egypt following the British landings in Aboukir Bay on 8 March, but although the squadron remained at Suez from April to June it achieved little. Unfortunately the heat of the Red Sea summer took its toll upon Blankett, and following a long period of ill health he died aboard the Leopard near Mocha on 14 July 1801.

Blankett was fluent in French, Italian and Portuguese, and greatly admired for his abilities as an officer. He was said by some to be of an amiable disposition and a perfect gentleman, although he suffered badly from gout which often left him short-tempered and impatient. Others accused him of dallying in ill-thought out and ludicrous ideas, although these at least made him an interesting and amusing if somewhat controversial companion in the eminent circles within which he moved. The renowned philosopher, Jeremy Bentham, painted a picture of a wrong-headed blockhead who always interrupted or dominated conversations to impose his own point of view, was coarse, ignorant, confident and amusing , ill-read and assuming and a braggart. Blankett was convinced that a large continent existed in the Pacific Ocean but never had the opportunity to search for it.