On 15 August 1759 Lutwidge was commissioned lieutenant of the Echo 24, Captain John Laforey, and he commanded the cutter Cholmondely 4 in this rank from April 1763 for three years in the preventative service, seeing some duty in the St. George’s Channel and the Mersey.

He was promoted commander on 21 January 1771 and recommissioned the bomb-vessel Carcass, serving in the Irish Sea until paid off in April 1773. He then recommissioned her in the same month, serving under the orders of Captain Hon. Constantine John Phipps in an expedition to seek out a north-west passage, and employing the young Horatio Nelson as a midshipman and coxswain of his gig. Departing the Nore on 4 June, the expedition penetrated the ice fields to a latitude of 80 degrees 48 minutes north before returning to England in September. On 15th October Lutwidge was posted captain, whilst another outcome of the expedition was the opportunity in later years to tell the story of the young Nelson confronting a polar bear. 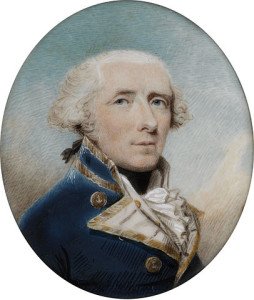 In August 1775 Lutwidge recommissioned the new frigate Triton 28, sailing for Quebec from Spithead in March 1776 with six transports carrying part of the 49th Regiment, and arriving with this valuable reinforcement to supplement those which had effected the relief of Quebec on 6 May. In early 1777 he was commanding the naval vessels on Lake Champlain with a broad pennant, and he was warmly praised for leading the pursuit of American forces retreating from Ticonderoga. He returned to Quebec and the command of the Triton in September, and he took the American privateer Pompey in the St. Lawrence on 13 June 1778 prior to arriving back at Portsmouth in early December.

After a refit and coppering the Triton served with the Channel fleet, returning to Plymouth at the end of July 1779 having sprung her foremast, and thereafter being with the fleet during the retreat of August. She captured the American privateer Gates on 29 September, and was present at the Moonlight Battle on 16 January 1780 before she sailed out of Plymouth in March with dispatches. During the autumn she was serving on the North American station where in company with the Guadeloupe 28, Captain Hugh Robinson, she took several prizes and sent them into New York.

In November 1780 Lutwidge assumed command of the Yarmouth 64 from the dismissed Captain Nathaniel Bateman, in which vessel he was ordered to embark some seventy prisoners including notable American privateer and Continental Congress officers such as Joshua Barney. Sailing from New York with a convoy on 16 December, the prisoners were somewhat ill-treated both physically and mentally whilst being conveyed to Plymouth, and such was their condition on arrival in January 1781 that they had to be transferred out of the ship in a sling

After paying the Yarmouth off in March 1781 Lutwidge commissioned the newly launched frigate Perseverance 36 in the following month at Deptford, but for want of men she could not go down the Thames for some time. On 14 July she finally arrived at Portsmouth having been to the coast of Holland under the orders of Captain Lord Mulgrave of the Courageux 74.

On 26 July 1781 the Perseverance departed Portsmouth for New York with Rear-Admiral Hon. Robert Digby’s squadron, and three days later, having been temporarily detached, she captured the French frigate Lively 26, which had previously the British Lively 20 until her capture by the French in July 1778, and which, with her consort, the Hirondelle 16, was returning to France from Cayenne. The Lively suffered casualties of six men killed and ten wounded in the brief action after firing a broadside for purposes of honour and receiving a devastating one in return. The Perseverance then reached Sandy Hook before the arrival of Digby’s squadron towards the end of September.

Continuing on the North American station until the peace, the Perseverance captured the rebel privateer General Greene on 30 August 1781, the French cutter Alerte 18 in December, and the privateers Raven on 1 April 1782, and Diana on 29 August. On 7 May 1783, following the ending of American War of Independence, General George Washington came aboard the Perseverance near Tappan in the Hudson River to hold a conference and thereafter a dinner with General Sir Guy Carleton, and after returning to England the frigate was paid off in the Thames during September

In September 1786 Lutwidge was appointed to the Plymouth guard ship Crown 64 but quickly exchanged with Captain Charles Morice Pole into the Scipio 64, commanding her from November in the Medway. His command formed part of Rear-Admiral Hon. John Leveson-Gower’s squadron of observation in the summer of 1787, and she went round to the Downs and Portsmouth with pressed men during the Dutch Armament in October before returning to her station in the Thames on 8 November. She subsequently joined Rear-Admiral Leveson-Gower’s squadron of Observation in the Channel during June and July 1788 before returning to Chatham. Lutwidge was accorded the honour of raising a broad pennant in the Medway in April 1789, and he retained that position until the Scipio was paid off in October.

In December 1792 he commissioned the new Terrible 74, sailing from the Downs to Portsmouth in March 1793 and putting out with Vice-Admiral Phillips Cosby’s division of the Mediterranean fleet in April to be present at the occupation of Toulon from August. He was advanced to the rank of rear-admiral on 12 April 1794, and he remained for a short while in the Mediterranean with his flag aboard the Terrible, Captain George Campbell, where he participated in the Corsican campaign which had commenced in February. He eventually returned to Harwich from Helvoetsluts aboard the packet King George in July.

Lutwidge was promoted vice-admiral on 1 June 1795, and following the mutiny which erupted at the Nore on 12 May 1797 he was appointed commander-in-chief of that station in succession to Vice-Admiral Charles Buckner, kissing the hand of the King before departing for his post in June. To him fell the burden of trying the mutineers, and he spent much time embroiled with various captains over their wish to have certain men released. He also presided over the court-martial of Captain John Williamson of the Agincourt 64 at Sheerness on 4 December which found that officer guilty of disobeying signals and of not getting into action at the Battle of Camperdown on 11 October 1797, although it cleared him of cowardice and disaffection. During his command of the Nore Lutwidge flew his flag aboard the Sandwich 90, Captain James Mosse, transferring from October 1797 to the Zealand 74, Captain Thomas Parr.

In April 1799 he transferred to the command of the more strategically important Downs station where he generally flew his flag aboard the Overyssel 64, Captain John Bazely. It was to the Nore that the neutral Dutch frigate Freja 40 was brought following her encounter with the Nemesis 28, Captain Thomas Baker, on 25 July 1800, an affair that Lutwidge handled diplomatically, although by then the damage had been done and war with the Netherlands soon followed. At the beginning of November 1801 he hoisted his flag aboard the Trent 36, Captain Sir Edward Hamilton, to attend the court martial at Portsmouth of Vice-Admiral Sir William Parker for having despatched his flagship on a cruise to a different station, and he returned to the Downs before the end of the month.

In January 1802 Lutwidge’s nephew, Lieutenant Henry Lutwidge, was committed to Winchester Gaol to await trial for the ‘wilful murder’ of a seaman, Thomas Fagan, who he had struck several times with the tiller when the man had been drunk and abusive whilst in the launch of the Resistance 38, Captain Henry Digby at Spithead. Fagan had died shortly afterwards but as there had been no sign of violence to his body it had been assumed that he had died of intoxication. Following a submission to the Admiralty the seaman’s body had been dug up from the burial ground at Haslar Hospital and the Coroner’s Jury had declared it to be a murder. At his trial in March Henry Lutwidge was acquitted of murder but found guilty of manslaughter and sentenced to a fine of one hundred guineas and three months in prison.

On 19 April 1802 Lutwidge struck his flag in the Downs from the St. Albans 64, Captain Sir Frederick Thesiger, to which ship he had removed in January, and he retired ashore. He was promoted admiral on 1 January 1801.

Admiral Lutwidge died on 16 August 1814 at his estate of Holm Rook Hall near Ravenglass in Cumbria.

On 11 June 1789, at which time he was living in Argyll Street, London he married Catherine Bateson who predeceased him in 1810 without having had children. His nephew, Henry Lutwidge, entered the service with him in June 1794 on the Terrible, was a prisoner of France from 1804-14, and eventually reached the rank of commander.

Lutwidge earned deserved praise for his stewardship of the Downs station at the end of his career.