c1720-1790. He was the second son of Jonathon Darby of Leap Castle, King s County in Ireland, and of his wife Anna Marie Frend.

After being promoted lieutenant on 7 September 1742 Darby was posted captain of the Warwick 60 on 12 September 1747, and in December joined the Aldborough 20, serving in North America and then at Jamaica before she was paid off in July 1749.

During 1756 he was appointed to the Seahorse 24, going out to Newfoundland in May. In 1757 he joined the Norwich 50, seeing duty in North America and the West Indies, and two years later served under Rear-Admiral George Rodney at the bombardment of Le Havre. He then commanded the Devonshire 66 from March 1760, taking a convoy out to North America in the following month, and from 1761 he was employed in the Leeward Islands where he participated in Rodney s reduction of Martinique during early 1762. On the conclusion of that campaign Darby had the honour of being sent home with despatches, and as a reward he was given 500 by the King towards the purchase of a sword. 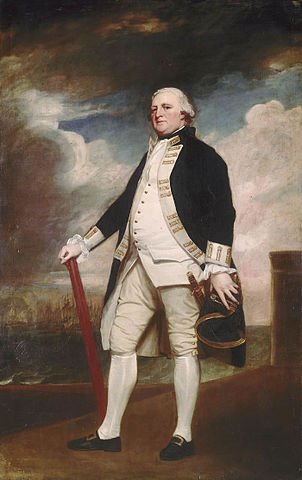 A long period of unemployment followed, during which Darby was promoted rear-admiral on 23 January 1778 and vice-admiral on 19 March 1779. On 29 March he hoisted his flag aboard the Britannia 100, Captain Charles Morice Pole, as third-in-command in the Channel to Admiral Sir Charles Hardy in order that he could preside at the court martial of Vice-Admiral Sir Hugh Palliser following the Battle of Ushant. His appointment was engineered to ensure a favourable verdict for the government, to whit Palliser s acquittal. After escorting the North-American bound convoy out to sea with ten sail of the line at the end of May, and briefly flying his flag in the Royal George 100, Captain John Colpoys, he participated in the Channel fleet retreat of August 1779.

Upon Hardy s retirement he became third-in-command in the Channel to Admiral Francis Geary, and following this officers resignation in August 1780 he succeeded to the command of the fleet on 7 September. Having the brilliant Rear-Admiral Richard Kempenfelt as his captain of the fleet, and Captain James Bradby as his flag-captain, he also took on the additional role of a lord of the admiralty in succession to Vice-Admiral Robert Man. The Channel Fleet campaign ran from June-December 1780 and in the late autumn he was in the vicinity of Cape Finisterre with twenty-two sail of the line when he fell in with the French fleet of thirty-six. Not surprisingly he preferred to avoid battle, and the fleet returned to England.

On 13 March 1781, flying his flag aboard the Britannia 100, Captain James Bradby, Darby sailed from England to relieve Gibraltar with twenty-nine sail of the line and one hundred and seventy store ships. He easily completed this task on 12 April 1781, but was subsequently criticised for failing to support one of his look-out vessels, the Nonsuch 64, Captain Sir James Wallace, in her fight with the Actif 74 in the Bay of Biscay on 14 May.

In the 1781 campaign from June to November his thirty scurvy-ridden ships faced the task of defending the Channel against nearly fifty allied sail of the line. Fortunately a council of the allied officers preferred to seek out the homecoming British convoys rather than follow the inclination of their commander, Rear-Admiral de Guichen, to attack Darby s fleet at Torbay in August, and when Darby s fleet set off to look for the allies on 14 September he soon learned that they had dispersed. Given his cautious nature it was perhaps fortunate for the country that he was ill when the government learned of the imminent departure of a heavily protected convoy from Brest some months later, for his indisposition allowed Kempenfelt to sail with twelve sail of the line from the Channel fleet and brilliantly attack the French on 12 December. Once he had recovered his health, Darby continued to command the Channel fleet throughout the winter of 1781, but on the change of government in March 1782 he lowered his flag and resigned his post at the Admiralty after declining the role of second-in-command in the Channel to Admiral Lord Howe.

His first wife, whom he married in 1768, was Mary St. Quintin of Scampton in Yorkshire, the daughter of the M.P for Thirsk, Sir William St. Quintin. She died on 27 March 1772 having borne him three sons and two daughters, including the future Major-General Matthew Chitty Darby-Griffith. His second wife, Ann Jackson, whom he married in 1776 was the widow of Thomas Bridges, and died on 12 March 1790, thereby predeceasing him by two weeks. His nephew, Henry d Esterre Darby, commanded the Bellerophon 74 at the Battle of the Nile. Darby s residence was Newton House, Hampshire.

A modest man of average abilities, Darby s appointment to the command of the Channel fleet was born of political expediency, as worthier officers such as Sir Robert Harland in 1779 and Hon. Samuel Barrington in 1780 had refused the post due to misgivings over the support they would receive from the government, and in particular from Lord Sandwich at the Admiralty. Darby himself was largely non-political, but despite the comments of one observer who pronounced him an old woman he was seen as a safe pair of hands at a difficult time, and a man whose neutrality, tactfulness and openness might unite the differing factions in the navy and bring desperately needed stability to the home fleet.