1761-97. Born in Ilfracombe, Devon, he was the third son of Richard Bowen, a merchant captain, and the brother of Rear-Admiral James Bowen and Captain George Bowen. Another brother, Thomas, died as a midshipman in 1796, whilst the second oldest brother, John, entered the East India Company Marine.

As a boy Bowen served with his father and under his eldest brother James in the merchant marine, undertaking voyages to Canada and Jamaica. Whilst on the latter island in 1778 he volunteered for the navy and was taken aboard the Emerald 32, Captain Benjamin Caldwell, as an able seaman. He returned to England in 1779 where it was intended that he should join Caldwell on the Hannibal 50, but as this vessel was not yet ready for sea he instead elected to serve as a midshipman from the autumn aboard the fireship Lightning 14, Commander Robert Calder. Upon this officer s promotion to the Buffalo 50 Bowen was taken aboard the crack Foudroyant 80 by Captain John Jervis, on Calder s recommendation. 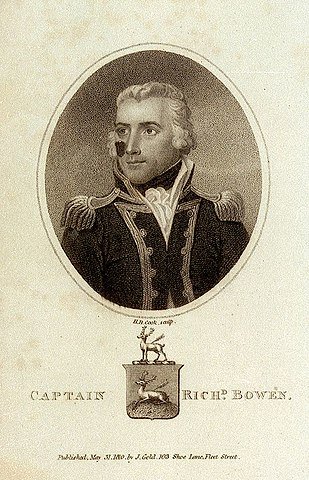 On 29 July 1781 he commanded one of the Foudroyant s boats with others from the Channel Fleet that towed the frigate Perseverance 36, Captain Skeffington Lutwidge, in to an engagement which saw the recapture of the Lively 20 from the French. During the Channel Fleet campaign of April August 1782 he earned further repute when leading a boarding party from the Foudroyant during that ship s capture of the French P gase on 20 April. He was rewarded with an acting-lieutenancy from Jervis and a sword from his good friend, Calder. Whilst the Foudroyant was undergoing repairs he served temporarily in the Bay of Biscay aboard the Artois 40 Captain John Macbride, of which vessel his brother James was the sailing master.

Come the end of hostilities in 1783 Bowen had still not been awarded a lieutenant s commission, but he remained in employment by joining the Portsmouth based guardship Pegas 74, Captain Sir Samuel Marshall, which vessel he had helped capture the year before. Further experience came that year aboard the Plymouth guardship Blenheim 98, Captain Richard Boger, and by the end of the year he was serving on the Adamant 50, Captain William Hancock Kelly, which flew the flag of Rear-Admiral Sir Richard Hughes in the Leeward Islands. He remained for the next three years on this station whilst also seeing service on the Latona 38, Captain Thomas Boston, but although on three separate occasions he was given an acting-lieutenancy the valued commission still eluded him.

After coming home in 1786 he received an appointment to the Royal Sovereign 100, Captain James Samber, which was fitting out for Admiral Hugh Pigot s flag during the Dutch Armament, but he was then stood down when the dispute was resolved. Nothing daunted, and upon the advice of Rear-Admiral Jervis, Bowen took a packet out to the Leeward Islands where he was accepted aboard the Jupiter 50 with the broad pennant of Commodore William Parker, being made an acting-lieutenant upon his arrival in January 1788. Typically he was thwarted of a promotion once more and so at the request of Sir John Orde, the governor of Dominica, he assumed the command of the government brig Lord Howe in which he was employed in the preventative service and anti-slavery operations.

Returning to active service during the Spanish Armament of 1790, he served briefly with Rear-Admiral Jervis aboard the Barfleur 98, Captain Calder, and on 21 September 1790 was finally commissioned lieutenant of the Prince 98, Captain Josias Rogers, to which Jervis had removed his flag. He then rejoined Calder aboard the Stately 64, but this vessel was paid off before the end of the year.

Disdaining inactivity ashore, Bowen managed to get himself appointed to the command of three transports bound for New South Wales with convicts and supplies. Departing aboard the Atlantic in March 1791 and reaching Port Jackson four months later, he thereafter undertook a return journey to Bengal for further supplies, voyaging easterly before turning north and eventually heading through the Malacca Straits to arrive in Indian waters in January 1792. After sailing from Bengal at the beginning of April he returned to Port Jackson in the middle of June. Six months later he left for England with the governor, Arthur Philip, and the Atlantic eventually returned to Spithead in the following May, by which time Britain was once more at war with France.

Bowen was soon appointed fourth lieutenant of Rear-Admiral Jervis s flagship Boyne 90, Captain Hon. George Grey, and he served in the campaign against the French Leeward Islands from January 1794. Once again he distinguished himself when detailed to command the guard-boats and gunboats at the siege of Martinique, and in boarding and capturing the French Bienvenue 32 by a boat attack under the guns of Fort Louis on 17 March. Unfortunately he did not have enough men to sail the frigate out, and in any event the wind was against him and she was chained to the fort. Even so he managed to fire a broadside into the fort and bring off twenty Frenchmen, including her captain and a lieutenant, before abandoning the frigate. The sustained fire of his gun-boats then supported the brilliant attack on the fort by Commander Robert Faulknor of the sloop Zebra 14, and upon that officer s promotion Bowen was in turn promoted commander of the Zebra on 20 March, being present at the reductions of St. Lucia and Guadeloupe during April.

On 23 April Bowen was posted captain of the Veteran 64, but he transferred shortly afterwards to the frigate Terpsichore 32. Upon being sent to North American waters he assisted the Daedalus 32, Captain Charles Henry Knowles, break her six-month long blockade in the Chesapeake on 17 May when the two French frigates keeping her in preferred not to seek an engagement. After sailing on to Halifax the Terpsichore returned to the Leeward Islands. On 10 December Bowen was severely wounded in the face by a musket ball whilst bringing off the last of the British garrison at Fort Mathilde, Guadeloupe, which had been recaptured by the French. Once the wound became infected he was sent home with despatches.

The Terpsichore underwent a refit at Portsmouth in the summer of 1795, and was then employed for a short while in the North Sea. In December he was sent out to join Admiral Sir John Jervis in the Mediterranean and was ordered to Gibraltar as the commander of the small craft based there. On 13 October 1796 his undermanned frigate, which had been decimated by illness, captured the Spanish Mahonesa 34 off Cartagena with minimal casualties, and his first lieutenant, John Ferris Devonshire, was promoted to command the prize. On 23 November, having shaken off a Spanish sail of the line the evening before, he captured a large Spanish vessel homeward bound from Montevideo off the harbour of Cadiz, which prize was in addition to a number of smaller vessels he had taken in the previous few weeks. His amazing run of success continued when on 12 December the Terpsichore received the surrender of a French frigate, the Vestale 36, off Cadiz following a forty hour chase and two hour engagement in rough weather conditions. Sadly he lost his prize, together with the crew he had placed aboard her, when the appalling weather allowed the French to regain control and carry her into Cadiz. His brother George, a lieutenant aboard his command, was wounded during this action but was rewarded for his efforts with promotion to the rank of commander.

Continuing with the Terpsichore, Bowen engaged the biggest warship in the world, the disabled Santisima Trinidad 130, in the days after the Battle of St. Vincent on 14 February 1797, and he only broke off the action when other Spanish ships intervened and allowed the giant four-decker to escape into Algeciras. By now the Terpsichore s harassment of the Spanish navy was so renowned that the frigate had acquired the nickname of the little devil , and when on 29 May two frigates attempted to sail from Algeciras to Cueta they immediately turned tail and scurried home once the Terpsichore was seen to be warping out of Gibraltar to join the Pallas 32, Captain Hon. Henry Curzon.

The Terpsichore was next sent on a mission to Tenerife by Jervis, who was now the ennobled Earl of St. Vincent, and there she cut a homeward bound richly-laden Spanish merchantman out from Santa Cruz on 18 June. After returning to Cadiz she protected the bomb vessels in Rear-Admiral Sir Horatio Nelson s bombardment from 3 to 10 July.

On 21 July the Terpsichore returned to Tenerife with Nelson s squadron when it was detached to attempt the capture of a Spanish galleon, but four days later Bowen was cut down by grape shot, as was his first lieutenant and the majority of his barge crew, when landing on the mole at Santa Cruz.

Bowen was buried at sea on 27 July 1797 but it was not until May 1810 that his brother James received his watch, chain and sword from the Spanish. In the meantime all entreaties for a memorial to be erected in his memory at St. Pauls or Westminster Abbey were rejected, it being deemed that there was no precedent for honouring an officer who had lost his life in an unsuccessful enterprise. Instead a monument was erected by Bowen s family in the local church in Ilfracombe.

Industrious, enterprising, gallant, and a particularly skilful seaman, Bowen was one of the most outstanding officers in the navy, and would undoubtedly have become a rival in brilliance to Nelson, Pellew and Keats, even though he was allegedly seeking to retire at the time of the Tenerife expedition. The Earl of St. Vincent greatly admired his qualities, extolling the most inexhaustible spirit of enterprise and skilful seamanship, that can be comprised in any human character .