In September 1775 he joined the Niger 32, Captain George Talbot, and served on the North American station at Boston and in the occupation of New York. He was promoted lieutenant by Vice-Admiral Lord Howe on 29 April 1777, moving shortly afterwards on the same station to Rear-Admiral James Gambier s flagship Ardent 64, Captain George Keppel. Thereafter he spent some time commanding the floating battery Vigilant 16 in support of the army in the Chesapeake and Delaware rivers. 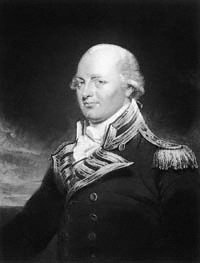 Lord Howe advanced Cotton to the rank of commander on 3 April 1779, and he was posted to the Boyne 70 on 10 August. With this ship he fought in the Battle of Martinique on 17 April 1780 where she lost two men killed, and in the subsequent Leeward Islands campaign from May July including the fleet skirmishes in the former month. During these further actions his vessel was so badly damaged that she had to be detached to St. Lucia, and he brought her home to England to be paid off on 17 November 1780.

In April 1781 he took command of the frigate Alarm 32 in the Downs, serving in the Channel fleet during the campaign of June-November and then going out to the Leeward Islands in the early part of the following year where she was the repeating frigate at the Battle of the Saintes on 12 April 1782. Cotton returned to England at the peace, and he remained unemployed for the next eleven years.

On 1 March 1793 he was appointed to the newly commissioned Majestic 74 for service in the Channel, and he participated in Admiral Lord Howe’s cruises from July-August before his command collided with the Bellerophon 74, Captain Thomas Pasley, forcing her to return to port. He later joined the unsuccessful cruise of October – December. At the Battle of the Glorious First of June in 1794 he seconded his divisional commander, Admiral Sir Alexander Hood’s, flagship Royal George 100, losing three men killed and eighteen wounded. Although he received Hood’s thanks, he did not distinguish himself greatly after being late into the action, and along with many other captains was not awarded the gold medal.

On 1 October 1794 Cotton exchanged into the Impregnable 98, with the flag-officer from that vessel, Vice-Admiral Benjamin Caldwell and his flag-captain, George Blagden Westcott, taking the Majestic out to the Leeward Islands. Shortly afterwards, on 28 November, he joined the newly commissioned Mars 74 in the Channel, and following the death of his father and the earlier deaths of his brothers he became the 5th Baronet of Madingley, Cambridgeshire, on 23 January 1795.He was present in the Cornwallis Retreat of 17 June when his ship was the last in line and was attacked by the French for over four hours before being rescued by the flagship, and he remained thereafter in service with the Channel fleet.

On 20 February 1797 Cotton was promoted rear-admiral, whereupon he went on half-pay. In March 1799 he hoisted his flag aboard the Prince 98, Captain Samuel Sutton, as third in command in the Channel, and he commanded twelve ships of the fleet which served as reinforcements to Vice-Admiral Lord Keith in the Mediterranean following Vice-Admiral Bruix s escape from Brest on 25 April, returning to his station in the Channel with the combined fleet which chased the French back to their home port. During 1799-1800 he flew his flag aboard the Prince 98, Captain Sam Sutton, Windsor Castle 98, Captain Albemarle Bertie, and from late 1800, by which time he had become second-in-command in the Channel, he was aboard the Prince George 90, Captain Charles Rowley, who was succeeded by Captain John Rodd, remaining with her until the peace of 1802.

On 16 May 1803, following the resumption of hostilities, Cotton returned to the Channel fleet as second-in-command to Admiral Hon. William Cornwallis with his flag aboard the San Josef 112, Captains John Rodd and, from 1805, Tristram Robert Ricketts. He was promoted vice-admiral on 23 April, and during July-August 1804 he temporarily commanded the fleet. He also flew his flag aboard the Prince, Captain Richard Grindall, in late 1804 when the San Josef was under refit. Once more in March 1805 he briefly commanded the Channel fleet pending the arrival of Admiral Lord Gardner to act for the indisposed Cornwallis. In 1806 the succeeding commander-in-chief, Lord St. Vincent, condemned him for sending frigates from Cork to seek prizes in the stream of the Loire , and he left his position shortly afterwards.

By now, Cotton was seen as the coming man and in quick succession he was offered the Newfoundland command, a seat on the Board of Admiralty, and chief of the Halifax station. He turned all these positions down, as well as the command of the expedition to Copenhagen in 1807, preferring to remain in domesticity. 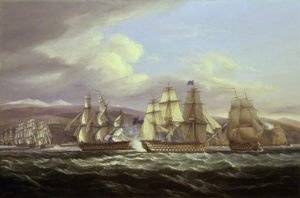 The Mediterranean Fleet in blockade of Toulon c1810

Eventually returning to active service, Cotton was appointed commander-in-chief in the Tagus in succession to Rear-Admiral Sir William Sydney Smith, who had evacuated the Portuguese Royal family on 29 November 1807. Before assuming his command he attended the funeral of Captain Charles Lydiard at Falmouth on 2 January 1808, this officer having drowned with the loss of the Anson 46 on the previous 29 December. Arriving off Portugal on 15 January 1808 with his flag aboard the Minotaur 74, Captain Charles Moore Mansfield, and with Captain Lawrence William Halstead acting as his captain of the fleet, Cotton removed to the Hibernia 100, Captain Robert Jenner Neve, in the same month. He was promoted admiral on 28 April and spent his first few months trying to force a Russian fleet under Vice-Admiral Dmitri Nicolaevich Seniavin out from Lisbon, much to the distress of the Portuguese residents who found their city under a virtual blockade. Representing the navy, he refused to sign the shameful Convention of Cintra on 30 August 1808, and after holding out he instead negotiated the surrender of the Russian fleet for up until and for six months beyond the peace. This was a shrewd piece of diplomacy given that the army had already granted so many concessions to the enemy. He also did much to incite the Portuguese to overthrow the French invaders during his time in command of the station, and he laid down plans for the support and if necessary evacuation, of the army from Portugal.

In December 1808 Cotton returned to England, and in March 1810 was appointed to replace Vice-Admiral Lord Collingwood as commander-in-chief in the Mediterranean. Taking passage out to Cadiz aboard the Lively 38, Captain George M Kinley, he learned that his predecessor had already died at sea on 7 March. After arriving on 28 April his flag flew aboard the San Josef, Captain Robert Jenner Neve, who was succeeded by Acting-Captain Abel Ferris, and from February 1811Acting-Captain John Bowker. His captain of the fleet was Commodore Sir Richard King, who ten years after Cotton s death would marry his admiral s daughter. Although Cotton helped to prevent the Spanish Cartagena fleet from falling into the hands of the French his period in command was not a happy time personally, with officers throughout the fleet declaiming the inactivity in which he kept them, and Nelson s ex-captains clearly believing he was unworthy of commanding them.

It was therefore with some relief when on 11 May 1811 Cotton departed in the San Josef, now commanded by Captain George M Kinley, for the Channel to replace Admiral Lord Gambier as commander-in-chief, eventually hoisting his flag at Plymouth on 8 October. However, before he could achieve anything of note he died suddenly of an apoplexy at Stoke House, Plymouth on 23 February 1812. He was buried at Landwade Church in Cambridgeshire.

On 27 February 1788 at St. Marylebone Cotton married Philadelphia, the eldest daughter of Vice-Admiral Sir Joshua Rowley. The couple had two daughters and two sons, the elder of who, St. Vincent, born in 1801, became famous as a gambler and the driver of the Brighton Coach. One of Cotton s daughters, Maria Susannah, became the second wife of Vice-Admiral Sir Richard King. Cotton s seat was at Madingly, Cambridgeshire.

Cotton, whose early career benefitted greatly from the patronage of the first lord of the Admiralty, Lord Sandwich, had a reputation for being a good administrator. A tall man with a round face who was considered handsome, he was simple of manner, cheerful, mild, urbane and moderate.