1763-95. Born in Northampton, he was the eldest son of Captain Robert Faulknor, who whilst commanding the Bellona 74 in August 1761 captured the French Courageux 74 after a spirited action, and who died in Dijon, France, in 1769. His mother was Elizabeth Ashe, his grandfather was Captain Samuel Faulknor, who died when the Victory 100, flagship of Admiral Sir John Balchen, was lost with all hands on the Casket Rocks off Alderney in 1744, and his great-grandfather was Captain William Faulknor, who lost part of his leg in Queen Anne’s Wars. He was also the nephew of Admiral Jonathan Faulknor and of Captain Samuel Faulknor, and was the first cousin of Rear-Admiral Jonathan Faulknor. Many other relatives also served in the Navy. 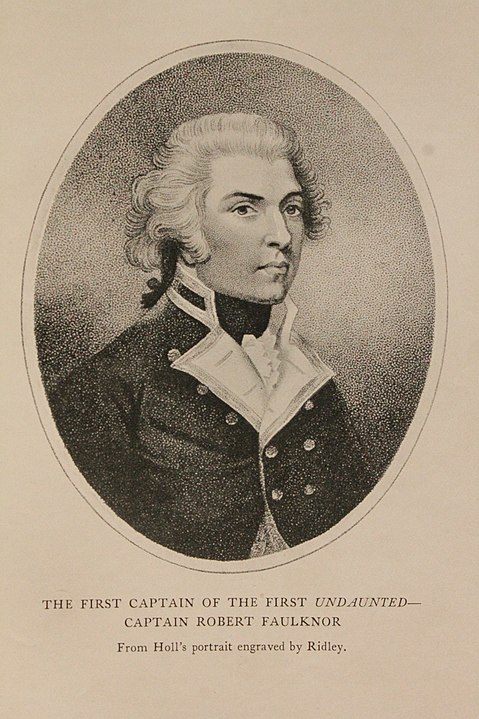 In January 1774 Faulknor entered the Royal Naval College at Portsmouth after undergoing a previous education at Northampton Grammar School. He first went to sea aboard the Isis 50, Captain Hon. William Cornwallis, going out to North America in March 1777 and being present at the Philadelphia Campaign from August. He followed Cornwallis briefly to the Bristol 50 at the end of the year before moving with that officer into the Chatham 50 to return home in the early part of 1778, and he continued with Cornwallis upon the latter’s appointment to the Medea 28 in May, although as that frigate was not ready for sea he removed with him to the Lion 64 in August. This vessel went out to the Leeward Islands in December, and Faulknor fought at the Battle of Grenada on 6 July 1779, and in Cornwallis’ actions with Rear-Admiral La Motte-Picquet’s French squadron on 20/21 March 1780, and Commodore de Ternay’s squadron on 20 June.

On 20 December 1780 he was commissioned lieutenant and appointed the flag-lieutenant to Rear-Admiral Joshua Rowley at Jamaica aboard the Princess Royal 98, Captains John Thomas Duckworth, Charles Hotchkys and Thomas Rich, prior to departing with her in a convoy for England during August of the following year. On 12 April 1782, after a year’s unemployment, he joined the Britannia 100, Captain Benjamin Hill, the flagship of Vice-Admiral Hon. Samuel Barrington, in which he participated in the relief of Gibraltar on 18 October and the action of Cape Spartel.

Having been paid off at the peace of 1783, Faulknor was able to obtain employment in April when he joined the sloop Merlin, Commander George Lumsdaine, going out to Newfoundland and returning home in November. In the following month he transferred to the Daphne 20, Captain Brabazon Christian, which vessel served on the Irish station for several years, and during the Dutch Armament in October 1787 he joined the Impregnable 98, Captain Thomas Pringle, which ship had been commissioned for the flag of Admiral Hon. Samuel Barrington. Thereafter until April 1788 he was with Pringle aboard the Hero 74, which was employed as a receiving ship at Chatham, and a brief period followed aboard the Plymouth guardship Carnatic 74, Captain Hon. Peregrine Bertie, before in May 1790, during the Spanish Armament, he obtained a position on the Royal George 100, Captain Thomas Pringle, which ship was again ordained to receive Barrington’s flag.

On 22 November 1790 Faulknor was one of many lieutenants promoted commander, and in March 1791 he commissioned the fireship Pluto 8 at Portsmouth, which vessel went out of the harbour for Spithead at the end of May having been painted jet black so as to present a ‘most infernal appearance on the water’. He remained with her until she was paid off at Portsmouth in September at the end of the Russian Armament.

In June 1793, several months after the commencement of the French Revolutionary War, he was appointed to commission the Zebra 16, serving in the North Sea before going out to the Leeward Islands in November with Vice-Admiral Sir John Jervis’ expedition. Faulknor subsequently played a most conspicuous role in the campaign against the French which commenced in January 1794, although it began disastrously when on 15 March he was court-martialled and acquitted of killing a seaman with an un-premeditated sword thrust after the man had interjected during a heated argument between Faulknor and an army engineer ashore. This was an unfortunate event that Faulknor bitterly regretted, and which no doubt led to an extraordinary display of aggression when he joined the assault on Fort Royal, Martinique five days later. His vessel’s intended role had been to support the Asia 64, Captain John Brown, in bombarding the fort, but when the larger ship missed the entrance to the harbour Faulknor took the Zebra in alone, and realising that his sloop would not long survive the hail of cannon fire and musketry from the French defenders he drove her aground under the fort and led his men over the bows to attack the works. The first man on the ramparts, he was soon joined by the boats of the fleet under Captain Edmund Nugent and the fort was carried. Admiral Jervis, who was never one to bestow too much praise, requested his band play ‘See the Conquering Hero comes’ when Faulknor reported to the flagship, and he was posted captain with seniority from that day, 20 March.

Initially appointed to the newly commissioned Undaunted 28, which as the Bienvenue 32 had been taken under the guns of Fort Royal, Faulknor removed to the Rose 28 five days later in succession to Captain Edward Riou. This too was but a brief commission, for on 4 April he was largely instrumental in the capture of St. Lucia, and a grateful Admiral Jervis promoted him to the frigate Blanche 32 in place of Captain Christopher Parker, who had been sent home with dispatches. He participated at the capture of Guadeloupe in the middle of April and was prominent in leading the uphill assault on the Fort Fleur d’Épée, where he was fortunate to escape with his life. The Blanche also proved to be a very successful cruiser, and soon reports were reaching England that as a result of her captures her seamen would be entitled to prizemoney in the region of five hundred guineas each, equivalent to about £65,000 in today’s money.

The Blanche briefly retired to Halifax in the early summer of 1794 to refit, taking with her a French prize bound from the Isle de France to America that she had shared with the Hussar 28, Captain Rupert George, but she was back in the Leeward Islands by October where she was employed in keeping a watch on the French forces which had regained Guadeloupe. On 30 December she cut a schooner out from the island of Désirade near Guadeloupe, although this was at a cost of two men killed and four wounded.

Shortly after midnight on 4 January 1795 the Blanche engaged the French frigate Pique 38 off Point à Petre, Over the next three hours she lost her main and mizzen masts as the two vessels fought side by side, and she also repelled a boarding attempt by her opponent, whose crew enjoyed a superiority of numbers. Faulknor then resolved to attempt the boarding of the Frenchman, but whilst endeavouring to lash the bowsprit of the enemy frigate to his capstan he received a musket ball in the heart which killed him. Other hands completed the task, and after raking her opponent constantly for two hours the Blanche’s second lieutenant, David Milne, was able to swim aboard the Pique to receive her surrender.

Captain Faulknor was buried on the Iles des Saintes, and he was succeeded in command of the Blanche by Captain Charles Sawyer.

His heroic death captivated the mind of the public, and following a debate in the House of Commons, during which Charles James Fox eulogised him, a monument to his memory was erected in St. Paul’s Cathedral. A one act opera, ‘The Death of Captain Faulknor’, was also presented at the Theatre Royal, Covent Garden.

Faulknor was of a dashing romantic appearance, with long distinctive eyebrows. He was also of a fiery temperament, and was so haunted by his inadvertent killing of the seaman in 1794 that he was often to be found relentlessly pacing his quarterdeck alone at night.