1742-1814. Born on 3 December 1742 at Cilgerran, Wales, he was the eldest of ten sons and nine daughters of Abel Gower of Glandofen, Pembrokeshire, and of his wife, Letitia Lewes.

Gower entered the navy in 1755 aboard the hired ship Brilliant under the care of his uncle Captain John Donkley, with whom he remained but a year before that officer died at sea. He saw further service in a variety of ships including the Superb 74, Captain Joshua Rowley, and in 1762 he passed his examination for the rank of lieutenant, although he was not at this time commissioned. Instead he was seconded to the Portuguese service in order to assist in the war against the allied houses of Bourbon, in which employment he remained for two years.

Upon returning to the British flag, Gower served as a master s mate under Captain Hon. John Byron aboard the Dolphin 20 during her brisk navigation of the globe from 1764-6, and on returning home he was commissioned lieutenant of the Swallow 16 on 9 July 1766. This vessel was commanded by Byron s senior lieutenant, the promoted Captain Philip Carteret, with whom Gower shared in the adventure of another circumnavigation from 1766-9, during which voyage Pitcairn Island was discovered. 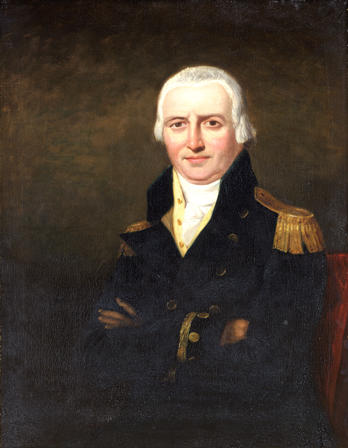 In 1769, having been home but a short while, Gower was appointed first lieutenant of the Swift 16, Captain George Farmer, going out to the Falkland Islands before returning to England in the Favourite 16, Commander William Maltby, after the Swift had been wrecked on the Patagonian coast with much suffering to her crew in March 1770. He then joined Vice-Admiral Sir George Rodney s flagship Princess Amelia 80, Captain Samuel Marshall, which was Jamaica-bound by June 1771, and where he transferred in May 1773 to the Portland 50 which had been brought out by Captain Andrew Barkley to become Rodney s flagship. Gower served as her first lieutenant before returning to England.

After the capture of a Spanish convoy on 8 January Gower was placed in command of the prize Guipuscoana 64, renamed the Prince William, in which he was present, albeit because of a lack of manpower un-engaged, at the Moonlight Battle off Cape St. Vincent on 16 January 1780. Deservedly he was at last posted captain with seniority from 9 January, it being deemed unnecessary for him to serve time in the rank of commander. After the fleet reached Gibraltar a few days as captain of the Porcupine 24 and Enterprise 28 followed before he was appointed flag captain to Commodore John Elliott aboard the Edgar 74, which remained at the Rock once Rodney s fleet departed. After the Edgar herself was recalled to England a few months later Gower retained her command, serving at the further Relief of Gibraltar on 12 April 1781 and occasionally flying Elliot s broad pennant.

In November 1781, after several months on half-pay, Gower joined the frigate Medea 28 which he took her out to the East Indies with Commodore Sir Richard Bickerton s squadron in the following February, although in passage he became detached from all of his consorts bar the Sceptre 64, Captain David Graves. After capturing a French storeship off the Cape of Good Hope on 21 May 1782 the Medea eventually arrived in India, her voyage having been further delayed by the shepherding of the prize. Gower carried General Sir Eyre Coote to Bengal at the end of September before taking up patrol off the Coromandel Coast, the rest of the East Indies fleet having sailed around to Bombay.

Early in January 1783, after she had anchored near the Balli de Suffren s French force in an overnight fog in the Ganjam Roads, the Medea only escaped capture through her swift sailing. On 16 January she took the French sloop Chasseur 20 which was carrying despatches from the Isle de France to Suffren, and at Cuddalore on 30 January Gower s boats cut the Dutch East Indiaman Vrijheid 58, mounting 32 cannon, out from under the guns of an enemy battery, although this vessel was lost shortly afterwards in the Madras Roads . Less than a week later, on 5 February, the Medea had another narrow escape from the French fleet, and on 16 March she managed to avoid two French frigates that had sailed up on her on a foggy night. She was then present in the action between Vice-Admiral Sir Edward Hughes and de Suffren off Cuddalore on 20 June 1783 before returning to England with a healthy sum of prize money and despatches in January 1784, and despite losing her main and mizzen masts off the Azores on 17 December.

In March 1786 Gower recommissioned the Salisbury 50 to fly the broad pennant of Commodore John Elliot at Newfoundland, going out in the June of each of the following three years and paying her off in November 1788. During the Spanish Armament in 1790 he replaced Captain Lord Hugh Conway Seymour aboard the Canada 74 after that officer has been badly wounded in an accident involving a swinging lead.

In May 1792 Gower recommissioned the Lion 64 for the purpose of taking the ambassador, Lord George Macartney, out to China, an expedition for which he had long been destined. Prior to sailing, Gower was knighted on 1 August 1792, and he departed a month later on this famous visit, returning in September 1794 with a valuable convoy for which he was again well rewarded. During the arduous voyage he lost a number of his crew to disease. 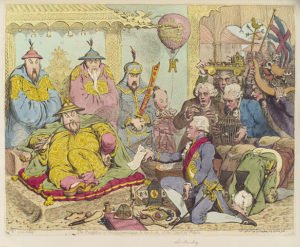 In November 1794 he recommissioned the thirty year-old Triumph 74 for the Channel fleet, and on 17 June 1795 participated in Cornwallis Retreat, giving valuable support to the stricken Mars 74, Captain Sir Charles Cotton. In the spring of 1797 he was detached with Rear-Admiral Lord Hugh Seymour s squadron of four sail of the line and two frigates which unsuccessfully sought to intercept a Spanish treasure convoy, but after returning to port he was removed from his ship by the crew who were infected by the Spithead mutiny that had erupted on 16 April. Refusing to return to the Triumph when the mutineers showed contrition the next day, he hoisted his broad pennant aboard the newly commissioned Neptune 98, Captain Henry Stanhope, and during the Nore mutiny that broke out on 12 May he was charged with protecting the Thames from the mutineers, be it with the guns of the Neptune or in smaller gunboats, for which there were many volunteers. He also made plans for attacking the ships of the Floating Republic , and subsequent to the mutiny he sat on a number of the court-martials on the ringleaders. Thereafter he commanded the Neptune as a private ship in the Channel for the next eighteen months.

Gower was promoted rear-admiral on 14 February 1799, and from the beginning of February 1801 until paid off early in the following year he flew his flag in the Channel aboard the Princess Royal 98, Captain David Atkins.

He was promoted vice-admiral on 23 April 1804, and from 1804-6 was commander-in-chief and governor of Newfoundland with his flag aboard the Isis 50, Captain John Acworth Ommanney, and in 1806 Captain John Laugharne, coming home each winter.

Described as excellent and a small and fair man, he was renowned as a through seaman and a meticulous administrator who had an outstanding knowledge of astronomy and geography, in addition to being an expert on East Indian waters. He was a patron to many younger officers including Captain David Atkins.