1773-1855. Born on 17 October 1773 to a family settled in Devonshire, he was the eldest son of Rear-Admiral Cornthwaite Ommanney who died in 1801, and the brother of Sir Francis Molyneux Ommanney, the M.P. for Barnstaple, Vice-Admiral Henry Manaton Ommanney, Captain Cornthwaite Ommanney of the Light Dragoons, and Lieutenant Montagu Ommanney of the Royal Artillery, who died serving in the West Indies in 1796.

Having had his name entered to the books of the Ajax 74, Sandwich 90 and Gibraltar 80 from 11 June 1780 until November 1781, all under the command of Captain John Symons, Ommanney first saw duty aboard the Powerful 74, Captain Thomas Fitzherbert, based at Plymouth. He remained with this vessel from April to August 1783 and then joined the frigate Rose 28, captained by Henry Harvey on the Newfoundland station in 1786. From December 1788 until April 1792 he served in the Mediterranean aboard Rear-Admiral Joseph Peyton’s flagship Leander 50, Captain Joseph Peyton Junior, the Aquilon 32, Captain Robert Montagu, and the sloop Zebra, Captain William Brown, before spending a short time in the River Thames aboard the royal yacht Catherine, commanded by Captain Sir George Young. 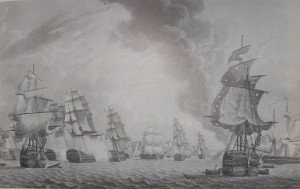 In July 1792 he went out to China with the Macartney embassy aboard the Lion 64, Captain Sir Erasmus Gower, and he was commissioned lieutenant with seniority from 20 May 1793. On 18 October 1794, shortly after returning to England, he joined the Aquilon 32, Captain Robert Barlow, serving in the Channel, and after transferring in March 1795 to the Queen Charlotte 100, Captain Sir Andrew Snape Douglas, he was present at the Battle of Groix on 23 June.

On 6 December 1796 Ommanney was promoted commander, and during the Nore Mutiny which broke out on 12 May 1797 he had the gun brig No 28 in defence of the River Thames before going down to Deal with two other captains with the intention of taking command of the shipping there in order to prevent a further mutiny. In the event this journey proved unnecessary.

He commissioned the newly acquired brig Busy 16 in December 1797, spending the next two years on the North Sea station. On 7 August 1799, whilst in company with the brig Speedwell 14, Lieutenant James Reddy, and despite the presence of the escorting frigate Ulla Fersen 18, a vessel that would have been termed a sloop if flying British colours, he intercepted a convoy of Swedish merchantmen and sent them into the Downs to be searched for contraband of war, earning the approbation of the Admiralty for so doing. The Swedish captain was not so fortunate, and despite the fact that he had been severely outgunned by the British vessels he was recalled and sentenced to death for not offering any resistance, although this judgement was commuted and he eventually reached high rank.

Ommanney served in the expedition against Holland from August-October 1799, following which he earned praise for his capture on 16 September of a notorious French privateer, the Dunkirk lugger Dragon 16, which he had driven into heavy surf near Egmont on the Dutch coast before getting her into safe waters, although not without the loss of eight of her crew who drowned whilst trying to flee ashore in a small boat. The prize was taken into Yarmouth. In January 1800 the Busy went out to the Leeward Islands with a convoy of one hundred and fifty sail, but the sickly Ommanney left her and returned to England in July before she made the homeward voyage.

Whilst was still recuperating from illness, Ommanney was given a commission to command the Garland 24 which had recently been added to the navy after being captured as the French privateer Mars. He was posted captain on 16 October 1800, whereupon he was superseded in command of the Garland, and he temporarily commanded the frigate Hussar 38 in the spring of 1801 before exchanging with Captain William Brown into the Robust 74, which he retained until the summer. From December 1801 until May 1802 he was the flag captain to Rear-Admiral Cuthbert Collingwood aboard the Barfleur 98 in the Channel.

After a period of unemployment following the renewal of hostilities with France in 1803, he became the flag-captain to Vice-Admiral Sir Erasmus Gower on the Newfoundland station aboard the Isis 50 in May 1804, although having returned to Portsmouth in November he spent a short time in blockade of the Texel and Boulonge. After going out to Newfoundland again in the early summer of 1805 the Isis arrived at Cork in November, and Ommanney left her shortly afterwards.

He thereafter had no further employment until June 1825, when he was appointed to recommission the Albion 74, going out to Lisbon via Cork and Gibraltar at the end of the year and thereafter serving in the Mediterranean. In 1827 he was created a C.B. and rewarded by France, Greece and Russia for his services at the Battle of Navarino, where he lost ten men killed and fifty wounded in taking his ship into action in what was described as ‘the highest style’ . The Albion returned to Portsmouth in early 1828.

On 22 July 1830 Ommanney was promoted rear-admiral, and he was knighted on 20 May 1835. In the summer of 1837 he was defeated as a candidate for the parliamentary borough of South Hampshire, and in August it was announced that he would raise his flag at Plymouth aboard the aged Donegal 76, Captain John Drake, to go out to Lisbon to replace the indisposed Rear-Admiral Sir Edward Brace. After assuming the command in October he was nominated a K.C.B. on 20 July 1838.

In November 1839 he had cause to bring an action against the United Service Gazette which had reprinted a story accusing him of insulting behaviour towards Queen Adelaide, the Queen Dowager, on the occasion of her visit to Lisbon in the previous April whilst taking passage home from Malta. The imputation was that he had not ordered the appropriate salute, whereas in fact it had been the Queen Dowager who had requested that the salute not be made. The case was settled in the following June when the judge concluded that although the newspaper had published a retraction, the editor had been at fault for not apologising for slurs against Sir John, including labelling him a ‘driveller’ , that he was unfit for command, and that he was useful only to a party for political purposes . The editor was ordered to pay a fifty guinea fine and was sentenced to be imprisoned until settlement was made.

After returning from Lisbon in the summer of 1840, Ommanney transferred his flag to the Britannia 120, Captain Drake, this ship being manned by the officers and crew of the Donegal, and upon departing Portsmouth on 19 November he went out to the Mediterranean to deputise as the commander-in-chief for Admiral Hon. Sir Robert Stopford at Malta. In April 1841 Captain Michael Seymour assumed the command of the Britannia, and Ommanney transferred with this officer to the Powerful 84 in September before returning to Portsmouth that winter.

He was promoted vice-admiral on 23 November 1841, admiral on 4 May 1849, and was the commander-in-chief at Devonport from 1 May 1851 with his flag for some time aboard the Impregnable 98, Captain Arthur Lowe. This proved to be a difficult term as a result of the strain in fitting out of the fleet for the Baltic, and he again became locked in controversy after being accused of having neglected to send a steamer to the aid of the steam packet Amazon when she had caught fire sixty miles to the west of the Scilly Isles and blown up with the loss of one hundred and forty lives. In July 1852 he attended Queen Victoria and Prince Albert on the occasion of their visit to Plymouth, and when Ommanney came to vacate his post on 1 May 1854 it was a sign of the times that he left the port by train, not sail.

Ommanney died on 8 July 1855, his wife Frances surviving him but a few weeks.

In October 1803 at Nettlebed, Oxfordshire he married Frances Ayling of Slidham, Sussex, and the couple had issue four daughters. His nephew, Erasmus Ommanney, son of the M.P. for Barnstaple, entered the service in 1826, was his flag-lieutenant from 1837-40, and was posted captain in 1846. The address Ommanney’s his will was given as Warblington House, Havant.

In his later years the newspapers did not hesitate to publish criticism of a clearly unpopular Ommanney, reporting how delighted his subordinates were with his departure from Malta in 1841, and stating that he was completely disliked, was coarse towards his officers, and was a morose old gentleman . He was a Radical-Whig who suffered greatly in the Tory press, served as the deputy-lieutenant for Southampton, and was described as an active magistrate in the counties of Hampshire, Sussex and Surrey.