1759-1826. He was the second son of the Rev. Godfrey Wolley, rector of Thurnscoe and of Warmsworth in the county of Yorkshire, and of his wife, Katherine Lamplugh. A younger brother was Captain Isaac Wolley.

He commanded the Goelan 14 on the Jamaican station in 1793, which vessel had been captured in April by the Penelope 32, Captain Bartholomew Rowley, and he was present in Commodore John Ford’s occupation of parts of Saint-Domingue on 19-21 September. He was posted captain of the Champion 24 for purposes of rank only on 19 December 1793.

In July 1794 he was appointed to the Active 32, being present in the Downs at the turn of 1795. After being detained for some weeks by contrary winds he sailed from Portsmouth for Newfoundland with the convoy in May in the company of the Boston 32, Captain James Morris, and he returned from that station and Lisbon to Portsmouth in December. 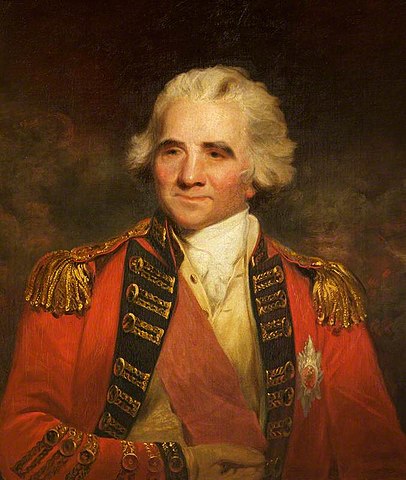 Wolley appears to have been a favourite of General Sir Ralph Abercromby (here portrayed), whom he took out to the West Indies on two separate occasions when commanding the frigate Arethusa.

In early 1796 Wolley was appointed to the Arethusa 38, described as one of the finest frigates in the Navy, although in February she was ran foul by the Ramillies 74 in Portsmouth Harbour and had her quarter gallery carried away. Shortly afterwards she set sail for the Leeward Islands, giving passage to Lieutenant-General Sir Ralph Abercromby and the French royalist General Marquis de Bouillé. She was present in the Leeward Islands campaign of April-June and subsequent to the capture of St. Lucia Wolley was sent with a small squadron to assist Abercromby in suppressing republican uprisings on St. Vincent and Grenada. On 28 August he arrived at the Admiralty in London with dispatches from Rear-Admiral Henry Harvey, having given passage home to Abercromby aboard the Arethusa.

Towards the end of November 1796, just three months after arriving home, the Arethusa once more sailed for the West Indies with General Abercromby, and Wolley was present at the capture of Trinidad on 18 February 1797, where he superintended the landing of troops. He later took Abercromby on a tour of the islands, and after departing Barbados with the general and his suite for home on 10 August he fell in with the French corvette Gaité 20 off Bermuda. Losing one man killed and three wounded, he won the encounter after an hour, his opponent later being censured for having the nerve to engage the larger British vessel, which the Frenchman had believed to be the sloop Bulldog 16, Commander John Dick. The Arethusa arrived at Portsmouth in the middle of September with her prize, and having also captured a Dutch East Indiaman in passage.

Continuing with the Arethusa, Wolley assisted in the escort of the West Indies fleet down the Channel in January 1798, and after seeing it to a designated latitude he embarked on a cruise which was interrupted when he rushed home to the Admiralty at the end of February to report that the Spanish fleet was at sea. In April he joined Commodore Sir Richard Strachan’s squadron off Le Havre where one of his first acts was to return some captured fishermen on the humanitarian grounds that they were the fathers of families. In June he escorted the East India fleet out of Portsmouth, reaching Madeira on the 20th before rejoining Strachan off Le Havre. After entering Portsmouth towards the end of July he was ordered back to Le Havre with a strong squadron under Captain Robert Carthew Reynolds of the Pomone 40 in August on reports that the French were about to sail from that port. He was later present when Strachan led an attack on forty-seven gunboats in the mouth of the Seine, and his command destroyed a 6-gun privateer lugger by driving her onto the rocks off Cap de la Hogue on 21 October under musketry from the shore that saw one man wounded. In November the squadron off Le Havre was split asunder by a gale which caused no little damage to the Arethusa, and she returned to Spithead in the company of the waterlogged sloop Cameleon 16, Commander John Stiles.

In January 1799 the Arethusa was nearly wrecked off France when she was left hanging aground at the bow, but with seven fathoms of water at her stern. Only be jettisoning seventeen cannons was the frigate refloated, and after making Plymouth in a desperately leaky state she was immediately docked for repairs. At the beginning of April, having been several weeks weather-bound, the Arethusa rounded the Isle of Wight with the East India convoy, and after escorting them once more to Madeira she re-entered Portsmouth on the last day of May with a prize and a recaptured ship. In July she conveyed the Duke of Kent and his suite from Portsmouth to Halifax, and after arriving at Nova Scotia on 6 September she was back at the Hampshire port by the middle of October with a prize Spanish schooner in tow.

In November 1799 the Arethusa sailed with a convoy for Lisbon, and on 20 December departed the Tagus for home with fifteen sail under her care to arrive at Spithead in early January 1800. On 12 January a court-martial aboard the Gladiator 44 in Portsmouth Harbour was held on Wolley’s first lieutenant, an officer by the name of Harford, on the charge of throwing breakfast tea at a junior lieutenant, and despite a hitherto good reputation the officer was dismissed the service. After a short cruise the Arethusa departed Spithead in March in the company of the Endymion 44, Captain Sir Thomas Williams, with another convoy for Lisbon and the Mediterranean, and she captured the Bordeaux privateer Générel Bernadotte 14 off Oporto on 1 May whilst on her return voyage home.

In July 1800 Wolley left Portsmouth to cruise off France, and in April 1801 the Arethusa brought in an East India convoy from St. Helena, arriving off Deal on the 11th. Two days later she entered Portsmouth with the privateer lugger Braave, which she had taken the day before after a six-hour chase in the Channel. Sailing shortly afterwards with five East Indiamen, she was off Madeira by 8 May where she parted company with her charges to search, unsuccessfully, for a prolific 36-gun French privateer that had made many prizes off that island. She subsequently returned to Portsmouth on 2 August having assisted the Immortalite 36, Captain Henry Hotham, in the capture of the extraordinary long, four-masted privateer Invention 24 in the latitude of Cape Finisterre on 27 July. On 23 August she left Portsmouth to embark on a cruise off Madeira from where she returned at the end of September following a seven day voyage. In the last week of October she sailed once more, and she reached Madeira on 17 November having been refused to land an Army officer at Tenerife as the Spanish considered the two nations to be still at war. By mid-December the Arethusa was at Deal before returning from Madeira to Portsmouth in February 1802 with the governor of that island, Brigadier-General William Henry Clinton, and on 7 April she entered Portsmouth Harbour to be paid off and laid up.

Wolley remained unemployed following the renewal of hostilities with France in 1803 until the summer of 1807 when he joined the Salvador del Mundo 112, the flagship of Admiral William Young at Plymouth. In 1810 he was one of several officers who went aboard the Africaine 38 to placate her men after the tyrannical Captain Robert Corbett had been appointed to her, and during the same year he had the happy task of announcing their reprieve to a number of men from the Naiad 38, Captain Henry Hill, who had either been sentenced to death or severe floggings for having mutinous intentions towards their unpopular captain. After leaving the Salvador del Mundo in July 1810 Wolley did not see any further employment.

He was advanced to flag rank on 1 August 1811, a vice-admiral on 12 August 1819, and died without ever hoisting his flag on 7 August 1826 at Brussels, having lived his later life in Clifton, Bristol.

On 7 April 1804 at St. George’s, Hanover Square, he married a Miss Francklyn of Lansdown Crescent Bath with whom he had two sons and two daughters. The address in his will was given as St. Albans, Hertfordshire, but his main residence had been Hinchelsea House, near Lyndhurst, Hampshire.