With the principles of the French Revolution spreading to her colonies in the Caribbean, there was great concern amongst the influential plantation owners as to their future, and nowhere was this more evident than on the French half of the valuable island of Saint-Domingue where the slaves, who had mischievously been granted emancipation by the National Assembly in Paris, were in open revolt. Providentially claiming royalist sympathies, the colonists in the town of Jérémie, situated on the northern coast of the southern arm of what is modern day Haiti, sent an emissary to the British lieutenant-governor at Jamaica, Major-General Adam Williamson, to plea for assistance. To this request, and to another suggestion subsequently received that the inhabitants of the fine port of Cape Nicolas Mole on the north-west tip of the island would probably submit to British protection, Williamson acquiesced.

On 9 September Commodore John Ford, the temporary naval commander-in-chief at Jamaica, departed Port Royal aboard his pennant ship Europa 50, Captain George Gregory, together with a squadron otherwise consisting of three frigates, a brig and two schooners, and with seven hundred troops commanded by Lieutenant-Colonel John Whitelocke of the 13th Regiment. On the evening of the 19th this force arrived at Jérémie where, on landing the next morning, they were welcomed with open arms by the inhabitants and the British colours were raised. That evening, whilst the troops secured their positions ashore, Ford vacated the port as he considered that the anchorage did not afford his squadron adequate protection from the heavy weather that was then prevailing. 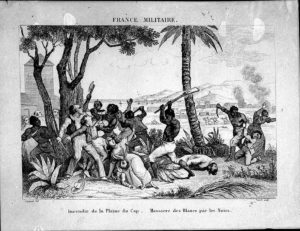 Quickly discovering from the French in Jérémie that the slaves and their republican allies were planning an imminent attack on Cape Nicolas Mole, Ford hastened to that place whilst detaching Captain Bartholomew Rowley with the frigates Penelope 32, Iphigenia 32, and Hermione32, plus the schooner Spitfire, on a diversionary attack against the Bay of Flamands to the south. Upon arriving off Cape Nicolas Mole on the evening of the 21st a French royalist officer was sent in aboard the schooner Flying Fish to negotiate the surrender of the garrison with a view to placing the town under British protection. Although several armed vessels chased the Flying Fish out of the harbour on the following morning the appearance of the Europa drove them back inshore again. The rest of the day was spent worrying over the fate of the French officer, who after landing by small boat on the mole had apparently been taken prisoner, but at 5 p.m. came his signal that a submission to British protection had been accepted. In practice the French authorities had been left with little choice but to capitulate, for not only were up to ten thousand slaves massing against them, but their troops, having been incited by the republican revolutionaries, were on the verge of mutiny, and the inhabitants were preparing to flee to America.

For a couple of days, the British held Cape Nicolas Mole with only the seaman and marines of the small squadron to assist the French inhabitants counter the slave army, but on the 28th reinforcements consisting of the grenadier company of the 13th Regiment arrived from Jérémie aboard the Flying Fish, and on 12 October the Penelope and Iphigenia returned from Jamaica with five companies of the 49th Regiment under Lieutenant-Colonel William Dansey, who had orders to hold the town.

The successful and bloodless capture of Cape Nicolas Mole was all the sweeter for the fact that the harbour, protected by a number of formidable batteries and viewed by Ford as the finest in the West Indies, was no longer available as a safe haven to the many French privateers in those waters. Additionally, it would provide the British with an excellent base to prosecute a campaign against the remainder of Saint-Domingue during the months to come.

Further satisfaction for the British came on the night of 25 November when the Penelope and Iphigenia captured the French frigate Inconstante 32 off Saint-Domingue after just a few broadsides, despite the loss of one man killed and seven wounded aboard the Penelope, and six men killed including her first lieutenant, and Captain Patrick Sinclair and twenty men wounded, three fatally, aboard the Iphigenia. For Commodore Ford there was also the personal satisfaction of having his temporary position as commander-in-chief at Jamaica confirmed by the Admiralty once his correspondence was received in London on 9 December.