1760-1845. His origins and family remain obscure, other than that he had at least two brothers, Charles, and Samuel, a barrister.

On 11 April 1776 Carpenter entered the navy aboard the Plymouth-based guard-ship Foudroyant 80, Captain John Jervis, which vessel was regarded as the smartest ship in the fleet. In the same year he moved to the frigate Diamond 32, Captain Charles Fielding, serving off North America, and after joining the Sultan 74 with this officer, and subsequently serving under Captain Alan Gardner, he was present at the Battle of Grenada on 6 July 1779.

During 1780 he served as an acting-lieutenant of the Rover 10, Commander John Thomas Duckworth, before he joined the Sandwich 90, the flagship of Admiral Sir George Brydges Rodney in the Leeward Islands. He was thereafter appointed acting-lieutenant of the Intrepid 64, Captain Anthony Molloy, taking part in the Battle of Fort Royal on 29 April 1781 and the Battle of Chesapeake Bay on 5 September. His commission as lieutenant was confirmed on 18 April 1782, and at the end of the year he was appointed to the Salisbury 50, Commodore Sir John Jervis, although the peace was declared in 1783 before this ship could undertake any active duty.

During the Spanish Armament of 1790 he served aboard Rear-Admiral Jervis’ flagship Prince 98, then the Bombay Castle 74, Captain John Thomas Duckworth, and was employed thereafter on the Barfleur 98, Captain John Bourmaster.

In 1793 Carpenter was appointed the first lieutenant of Vice-Admiral Jervis’ flagship Boyne 98, Captain George Grey, which arrived at Barbados in January 1794 to commence the Leeward Islands campaign against the French. He was promoted to the command of the sloop Nautilus 16 with effect from 9 January, although his initial duties in this rank were with the naval brigade ashore under the orders of Captain Eliab Harvey at the reduction of Martinique. On 25 March he was posted captain and ordered to fit out the French prize frigate Bienvenue 28, which had been renamed the Undaunted, but given her dilapidated condition this proved to be a most unhealthy task which resulted in many of his men being struck down by sickness, and which left him dangerously ill with yellow fever.

He was briefly removed into Veteran 64 and then succeeded Captain Lewis Robertson in command of the twelve-pounder frigate Alarm 32, in which he was sent by Jervis to North America to recover his health. After returning to the Caribbean, he assisted the Bellona 74, Captain George Wilson, when that ship captured the French corvette Duras 20 off Deseada on 5 January 1795, and he then took the prize to St. Kitts. He was later active in helping suppress Negro rebellions on the islands of St. Vincent, Grenada, and Dominica, and following the death of Captain Josias Rogers on 24 April he joined the Quebec 32 in May as that officer’s replacement, returning home in July and bringing with him General Benedict Arnold after that controversial officer had escaped the French authorities on Guadeloupe where he had been accused of spying. In January 1796 the Alarm sailed from Plymouth to join three other frigates on a cruise of observation off Brest, and when she arrived at Spithead Carpenter was succeeded by Captain John Cooke, who but for an administrative error by Rear-Admiral Charles Thompson would have joined her in the West Indies during the previous May.

In late 1799, after nearly four years on the beach, Carpenter was appointed to the command of the Leviathan 74, the flagship to Rear-Admiral John Thomas Duckworth in the Mediterranean. On 5 April 1800, in company off Cadiz with the Swiftsure 74, Captain Benjamin Hallowell, and the Emerald 36, Captain Thomas Waller, the Leviathan captured the Spanish frigates Carmen 32 and Florentina 34, together with a very rich convoy from Lima. The prize money earned the British captains £25,000 apiece, equating to over £2m in today’s money. 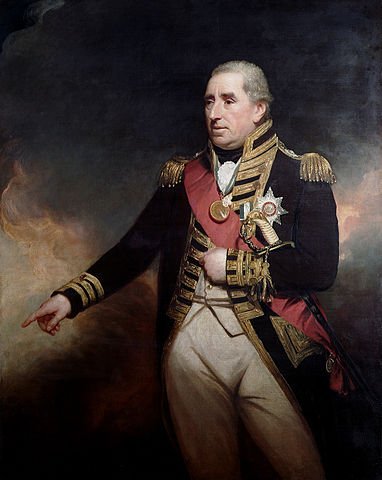 He subsequently commanded the Leviathan in the Leeward Islands as flag captain to Duckworth after arriving on that station in July 1800, but in October he was invalided home aboard the merchant ship Charlotte, together with Commander Bridges Watkinson Taylor of the storeship Dromedary which had been wrecked off Trinidad in August. Whilst in passage, the Charlotte was captured by the French and taken to Spain. Here, thanks to the good offices of his old commander the Earl of St Vincent, who had recently become the first lord of the Admiralty, Carpenter was exchanged for a lieutenant-colonel and two officers, and after returning home he was appointed to the San Josef 110 in February 1802. Nominally employed with the Channel Fleet, Carpenter retained the command for a mere two months until the San Josef was paid off at Plymouth towards the end of April following the end of the French Revolutionary War.

On the resumption of hostilities with France in 1803 he was given the command of the Dorset and Devonshire Sea Fencibles from Punknowle near Bridport to Teignmouth, from which position he returned to active service in December 1810 with his appointment to the Antelope 50, which vessel had just returned from Newfoundland under the captaincy of Donald M’Leod with the flag of his old friend, Admiral Sir John Thomas Duckworth. Initially tasked with taking a convoy out to Gibraltar, the Antelope arrived back at Portsmouth at the beginning of February 1811 to perform quarantine, and in March she escorted the East India convoy out to a safe latitude near the Azores to return to Portsmouth a month later.

On 3 June 1811 the Antelope entered Plymouth Dock from Torbay, and after hoisting Duckworth’s flag she sailed for Newfoundland from where she returned to Portsmouth on 9 November. At the end of the year she put into Plymouth, and she then undertook convoy duty to Yarmouth before returning to Portsmouth on 2 February. She was then ordered to take the East India fleet out to a certain latitude, whereupon Carpenter resigned the command to Captain Thomas White.

During the early part of his retirement Carpenter lived at Exmouth. In May 1821 he took passage to Le Havre aboard a packet with his family, he frequently visited the Sussex coast, and by 1832 he was apparently living in St. Leonards, Sussex, where he became a leading member of society.

Admiral Carpenter died on 16 March 1845 at 26 Cumberland Street, Portman Square in London, having become a widower on 23 May 1844 when his wife, Eliza had died aged 76.

He had issue at least two sons, one of whom died in 1812 when he fell to his death from the balustrades of a well-staircase. He also had at least two daughters, Frances, and Maria. His residence at the time of his death was given as St. Leonards, Sussex.