Windsor saw early service in North American waters, but although promoted lieutenant on March 1771 of the Salisbury 50 by the commander-in-chief of that station, Commodore James Gambier, this position had not been confirmed by the time he left for home in April to attend his dying father. Shortly afterwards he went out to Jamaica on the recommendation of the first lord of the Admiralty, Lord Sandwich, to the commander-in-chief, Vice-Admiral Sir George Brydges Rodney, and he found a midshipman’s berth aboard the Achilles 60, Captain Richard Collins.

Windsor was eventually commissioned lieutenant on 27 March 1772, and he saw further service on the Jamaican station from the end of the year aboard the Zephyr 10, Captain William Charles Burnaby. In March 1773 he was appointed the third lieutenant of the Portland 50, which Captain Andrew Barkley had brought out to serve as Rodney’s new flagship, and which the admiral’s flag-captain, Samuel Marshall, commanded from May. By January 1777 he had become the senior lieutenant of the Portland to Captain Thomas Dumaresq, at which time that vessel had been flying the flag of Vice-Admiral James Young in the Leeward Islands for the previous two years. 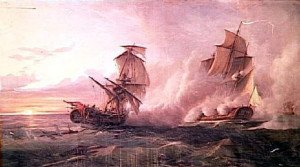 The capture of the Fox by the Junon 1778

Windsor was promoted commander on 14 February 1777 and appointed to the sloop Falcon 14 by Vice-Admiral Young at Antigua as part of a re-organisation brought about by the death of Captain Thomas Wilkinson of the Pearl 32. However, he was displaced from the command in May by Vice-Admiral Lord Howe upon that vessel regaining her proper station in North America, as the latter considered the appointment should only have been made by him. Windsor was sent back to Antigua aboard the Camel 22, Captain William Clement Finch, where in July a rather indignant Young appointed him to the captured American privateer Oliver Cromwell, which ship was initially renamed the Convert, prior to him returning to England a month later aboard a packet.

From the end of November 1777 to February 1778 Windsor reportedly commanded the Weazle 16, although it is not clear that he ever took her to sea. He was posted captain on 7 February 1778 to the Europe 64, which was in Portsmouth Dock, and in April joined the Fox 28, which was undergoing a coppering and fitting out at Portsmouth following her return from North America, where she had in short order been captured by the colonials and recovered by the Flora 32, Captain John Brisbane.

Sailing out from Portsmouth in the second week of June to join the Grand Fleet, the Fox remained cruising for a short while before coming back to port on 6 July with two prizes, and having outrun a French 74-gun ship to escape capture. She was present at the Battle of Ushant on 27 July, and on 10 September engaged the French frigate Junon 32 off Brest and was totally dismasted by her heavier opponent. It was only after a brave resistance which saw a musket ball splinter a bone in his arm that Windsor, who also sustained four other wounds, surrendered his ship, having lost eleven men killed and another thirty-eight wounded. The Fox was taken to Brest.

Windsor returned to England from France after being paroled in January 1779 following representations made in Paris by Lieutenant-General Hon. William Keppel, who sought him as a prime witness at the court-martial of his brother, Admiral Hon. Augustus Keppel, conversant with the political fall-out following the Battle of Ushant; indeed so vital was Windsor’s presence understood to be that the Admiralty even wrote to Admiral Keppel offering to delay the trial if the detained captain was not able to get home, although this offer Keppel declined. Upon arriving at Gosport with his first lieutenant, Albemarle Bertie, the pair immediately proceeded to Portsmouth where they gave evidence in favour of Keppel, contradicting Vice-Admiral Sir Hugh Palliser’s claim that the Fox had failed to deliver a message from Keppel at a crucial stage in the battle.

At the end of June 1779 Windsor returned to France in line with his parole of honour, but after eventually being released he commissioned a new Fox 32 in April 1780 in honour of his gallant defence, serving initially with the Channel fleet, and going out to Antigua from Cork with the trade in January 1781 before arriving at Jamaica at the end of April. Cruising thereafter on that station, he earned himself a small fortune by capturing the Spanish vessels Socorro Guipuscoano and Dama Biscayma, bound from St. Sebastien to Havana, and valued at one hundred and fifty thousand guineas each.

Having exchanged with Captain George Stoney at the end of January 1782 into the Lowestoffe 32, Windsor left Port Royal on 20 May with a convoy under the orders of Vice-Admiral Sir Peter Parker, from which he was detached to assist a snow that had gone ashore in the Gulf of Mexico. He eventually arrived at the Admiralty on 8 July, and his command was paid off in the following month.

Windsor was not thereafter re-employed but instead retired to Braywick, Berkshire. An attempt to be selected as a candidate for the Glamorgan parliamentary constituency in 1789 failed, but he served as the high sheriff of Berkshire in February 1802. Meanwhile he had resigned from the Navy in 1795, having been passed over for flag rank.

Captain Windsor died at Gore House, Knightsbridge, on 16 October 1832, six months after the death of his wife.

He married Frances, the daughter of John Bagnall and thirteen years his junior, on 20 February 1793 by special licence. She died in April 1832 at Gove House, Kensington at the age of 67. His address in the early 1800’s was Braywick House, Buckinghamshire and in the 1820’s he owned a residence of Woodside Lodge between Amersham and Wycombe Bucks.

During his comfortable retirement Windsor and his wife were keen socialites.