Died 1822. He was the third of four sons of the Reverend William Heywood, and of his wife, Elizabeth Reynolds of Milford, Hampshire. His grandfather, William Reynolds, owned two estates with enslaved workers on Jamaica.

In 1792 Heywood went out to China with the Lord Macartney embassy aboard the Lion 64, Captain Sir Erasmus Gower, which expedition returned to England in September 1794. He was commissioned lieutenant on 27 January 1797 and was the third lieutenant of the Phoebe 36, Captain Robert Barlow, when she captured the Africaine 40 off Minorca on 19 February 1801. 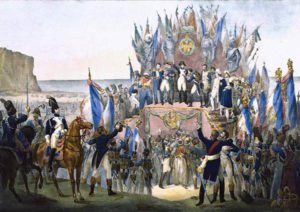 Napoleon at Boulogne in August 1804, shortly after he witnessed an attack on the invasion fleet led by Heywood that saw 400 Frenchmen drowned.

Along with many other officers Heywood was promoted commander on 29 April 1802, and in August he recommissioned the Harpy 18 for service in the North Sea. He served under Commodore Edward William Rich Owen off Boulogne during 1804, being active inshore and sending the gunboat Penriche and two small transports into the Downs in early January having captured them between Calais and Boulogne. On 19 July his command was prominent in the squadron that attacked scores of invasion craft when a gale swept the anchorage at Boulogne, resulting in the drowning of four hundred Frenchmen, an event that was witnessed by Napoleon Buonaparte. During April of the following year he performed a similar role under Captain Robert Honyman in attacking a number of French vessels near Cap Griz Nez.

In June 1805 the Harpy sailed from Portsmouth with the Quebec convoy in the company of the Pallas 32, Captain Lord Cochrane, and she returned to Portsmouth from Newfoundland in November. Heywood left his command shortly afterwards and was posted captain on 22 January 1806, again with many other officers.

Despite suffering from ill health he was appointed to the Comus 22 in July 1807, and hosting three generals, and in escort of a troop convoy, was sent from Harwich to the Baltic to join the operations that would eventually enforce the surrender of Copenhagen on 7 September. In the early stages of the campaign the Comus was detached with the Defence 74, Captain Charles Ekins, to pursue the Danish frigate Frederikscoarn 32, which had slipped out of Helsing r. When they fell in with the enemy the Comus was somewhat advanced of her consort, but she nevertheless chased the Dane for the best part of a day before bringing her to action in the small hours of 16 August. After raking and disabling the Frederikscoarn Heywood s vessel was able to board her opponent after a forty-five minute action and carry her for the loss of one man wounded.

Following a short period ashore he was appointed to the twenty-seven year old Astraea 32, which he fitted out at Chatham towards the end of 1807, and in which he captured the privateer Providence 14 on 14 December. After reaching the Leeward Islands in February he sailed on to Jamaica, serving on which station the Astraea was wrecked on 24 May 1808 off Anegada, one of the Virgin Islands, with all but four of her crew surviving. The remainder were taken aboard the Jason 32, Captain Thomas John Cochrane, and ferried to Barbados where the subsequent court martial on board the Ramillies 74 on 11 June concluded that the ship had been lost due to an extraordinary weather current, and that Heywood and his officers should be acquitted of blame for her loss.

In October 1810 he recommissioned the Ethalion 36, going out to Lisbon with troops in early 1811 under the orders of Rear-Admiral Sir Joseph Yorke, and later sailing for the Baltic. When the Tartar 32, Captain Joseph Baker, was wrecked after going aground near Hiiumaa Island, Estonia on 18 August 1811 the Ethalion brought off her entire crew. In August 1813 she escorted the trade out to Quebec and Halifax from Portsmouth, and having returned to England sailed from Portsmouth with transports for the northern coast of Spain in February 1814. Heywood left the frigate shortly afterwards and did not see any further employment, although he was nominated a C.B. on 4 June 1815.

On 7 February 1815 at Milford Church near Lymington he married Anna Maria Rivett, the daughter of a clergyman. Their daughter married the future Admiral of the Fleet Sir Thomas Matthew Charles Symonds in 1845.

As early as 1807 Heywood was suffering from the ill health that would eventually bring about his early death.