1764-1831. He was the son of a debt-ridden physician, James Walker of Inverdovat, Fife, whilst his mother, Lady Mary Leslie, was a younger daughter of the 5th Earl Leven and 4th Earl Melville. In the 1770 s Walker s father left the family to become a physician in a prison at Jamaica, and after taking up writing to provide for the children his mother became an esteemed novelist. She later eloped with a cousin of the Duke of Hamilton to live in France. Walker was the nephew of General John Leslie, and the cousin of Admiral the Earl of Northesk.

In December 1776 Walker entered the navy aboard the frigate Southampton 32, Captain William Garnier, going out to Jamaica in the following year and later serving in the North Sea and with the Channel fleet during the retreat of August 1779. He was somewhat fortunate to escape with his life in August 1780 after a captured privateer he had been sent to secure sunk off the Dorset coast, leaving him struggling in the water for some time. In 1781 the Southampton returned to Jamaica where Captain Garnier exchanged with Captain William Affleck of the Grafton 74. 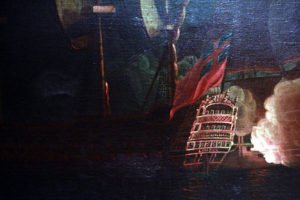 The action between the French Scipion, the London and the Torbay in 1782

Walker s career continued with a move to the flagship of Rear-Admiral Joshua Rowley at Jamaica, the Princess Royal 90, Captain Charles Hotchkys, from which ship he was appointed to an acting-lieutenancy on 18 June 1781. He quickly arranged a transfer to the Torbay 74, Captain John Lewis Gidoin, which had formed part of Rear-Admiral Sir Samuel Hood s reinforcements to the Leeward Islands fleet, and he saw action at the Battles of St. Kitts on 26 January 1782 and the Saintes on 12 April. As his father was a close personal friend of Admiral Sir George Rodney Walker fully expected to receive his first commission, but shortly afterwards Admiral Hugh Pigot arrived to supersede Rodney as the commander-in-chief, and thus he remained an acting-lieutenant. In this capacity on 17 October he was present when the Torbay, in company with the London 98, Captain James Kempthorne, drove the French Scipion 74 ashore in Samana Bay, Haiti.

Walker was finally commissioned lieutenant on 8 May 1783, but with the wars having ended he travelled the continent for the next five years, visiting France, Italy, Germany and Austria. He was in Vienna in 1787 when he learned of the Dutch Armament and the possibility of war with France, but whilst attempting to return to England his coach was attacked by vagabonds near Aschaffenburg. Prepared to repel the attack but denied assistance by his fellow passengers, Walker was thrown into a ditch, knocked unconscious and stripped of his belongings. After being patched up he returned to Germany when the threat of war passed.

On the instruction of the Admiralty in 1789 he rejected the command of a Russian man-of-war in that country s conflict with Turkey, and instead he found himself appointed in September to the frigate Champion 24, Captain Sampson Edwards, in which he served in Scottish waters. During the ensuing January he removed into the Winchelsea 32, Captain Richard Fisher, serving in the Channel before going ashore for a year from February 1792.

Following the opening of hostilities with France in early 1793 Walker helped commission the Boyne 98, the intended flagship of Rear-Admiral Philip Affleck, which sailed under Captain William Albany Otway when Rear-Admiral John Gell s squadron escorted an East India convoy out to Cape Finisterre. On the news that Vice-Admiral Sir John Jervis was going to take the Boyne as his flagship Walker transferred in June to the frigate Niger 32, Captain Hon. Arthur Kaye Legge, in which he served as her first lieutenant at the Battle of the Glorious First of June in 1794. On 6 July he was promoted commander along with all the other victorious first lieutenants, and in addition to acting as captain of the antiquated Gibraltar 80 for a short time he also rejoined Captain Legge as a volunteer aboard the Latona 38.

In April 1795 Walker was appointed to the bomb-ketch Terror 8, and in July he assumed the acting-captaincy of the Trusty 50, in which he was ordered to escort five East Indiamen to the south. Upon learning that up to forty merchantmen were sheltering at Cadiz he then entered that port on his own initiative and brought them home, for which action he was praised by the merchants of London. However, before departing Cadiz five of his officers had been detained for smuggling money on to the Trusty and a complaint was received from the Spanish government over the affair. Walker was placed under censure for disobeying orders, and after facing a court martial on 26 September was dismissed from the service. As this punishment was something of a diplomatic expediency to placate Spain, he was nevertheless allowed to take passage in Rear-Admiral Hugh Christian’s fleet for the Leeward Islands in the autumn of 1796, although his ship was one of the many that were driven back to England by a series of violent storms.

The Battle of Camperdown 1797

Upon his re-admittance to the service following the Spanish alliance with France at the end of 1796 Walker advocated a plan that was approved by the Admiralty for the launch of a gunboat attack on the seamen who had mutinied at the Nore on 12 May 1797, but in the event the insurrection collapsed before it could be put into effect. In July he joined the Garland 28 in conveying the Baltic trade as her acting-captain, and in August he took up a similar role aboard the Monmouth 64 in the North Sea fleet. With this vessel he distinguished himself at the Battle of Camperdown on 11 October where both the Delft 54 and Alkmaar 56 struck to him. The Monmouth suffered casualties of five men killed and twenty-two wounded in the battle, and she later towed the Alkmaar into Yarmouth.

On 17 October 1797 he was finally posted captain, but he could only obtain further temporary assignments with the Veteran 64 from February 1798, and then after exchanging with Captain James Mosse to the Braakel 56 in the North Sea and in convoy duty to Ireland from June. Thereafter he commanded the Prince George 98 which he recommissioned in May 1800, and the Prince 98 from August to October that year in the Channel.

In November 1800 Walker was appointed to the Isis 50, which sailed out to the Baltic with Admiral Sir Hyde Parker s expedition against the Armed Neutrality and fought gallantly at the Battle of Copenhagen on 2 April 1801, sustaining the huge casualty figure of thirty-three men killed and eighty-eight wounded out of a complement of three hundred and fifty. Whilst the remainder of the fleet pushed further into the Baltic the Isis returned to England with the Monarch 74, whose captain, James Mosse, had been killed in action, and the prize Holstein 64.

In July 1801 Walker commissioned the new frigate Tartar 32, taking a convoy out to the West Indies where in the following April he exchanged with Captain Charles Inglis into the Vanguard 74 at Jamaica, remaining with her on that station throughout the short peace.

Following the resumption of hostilities in 1803, and being in company with the Cumberland 74, Captain William Bayntun, the Vanguard captured the French frigate Cr ole 40 off St. Nicholas Mole on 30 June, and she then played a prominent part in the capture of the undermanned French sail of the line Duquesne 74 off Saint Domingue after her breakout from Cap Fran ois on 24 July. In the aftermath of the Negro insurrection on Saint Domingue she then embarked eleven hundred famished French soldiers from the garrison at Saint-Marc during early October to prevent their slaughter. Somewhat less auspiciously however, the Vanguard missed the rendezvous for the attack on Cura oa, and her absence played no small part in the expedition being aborted on 25 February 1804. Walker eventually returned to England in command of the short-handed Duquesne in September, carrying almost as many French prisoners of war as his crew, and which vessel he paid off at Chatham on arrival home.

He was next appointed to the frigate Thalia 36 in March 1805 and went out to the East Indies in the conveyance of two rich merchantmen before returning home ten months later in January 1806. The Thalia then conveyed the trade to Quebec, but in returning home with a convoy in December she encountered rough weather off the Newfoundland Banks and was obliged to scud for over a thousand miles under bare poles alone. Two weeks after arriving home the frigate was sent to join Rear-Admiral Sir Edward Nagle s squadron at Guernsey, and Walker was placed in command of a small squadron watching St. Malo.

In October 1807 he was appointed to the ancient Bedford 74, and upon joining Rear-Admiral Sir William Sidney Smith at Lisbon he assisted in the evacuation of the Portuguese royal family on 29 November, and in their subsequent conveyance to Rio. Walker spent the next two years in South America, becoming a good friend of the Portuguese Prince Regent by whom in 30 April 1816 he would be awarded a Portuguese honour. Meanwhile during 1809-10 he himself enjoyed the benefit of an acting-captain for a short while, the officer being Captain Adam Mackenzie of the President 38.

After returning to England and a refit in the autumn of 1810 the Bedford served somewhat uneventfully in the North Sea, and she then went out to the Leeward Islands in the spring of 1813 with a convoy before returning in the late summer with the Jamaica convoy, bringing home as a passenger the recalled Vice-Admiral Charles Stirling. Back in the North Sea Walker s seamanship saved his command from almost certain shipwreck during a storm in January 1814. He was thereafter employed in the Channel in the conveyance of troops, and later was accorded the honour of bringing the Emperor of Russia and King of Prussia to England from Boulogne. In September 1814 the Bedford crossed the Atlantic once more to disembark troops for the assault on New Orleans, and Walker remained in the Gulf of Mexico as the senior naval officer whilst his superiors were engaged up the Mississippi.

On 4 June 1815 he was awarded the C.B. and after the peace he commanded in succession the Albion 74 at Sheerness from June to December 1815, the guardship Queen 74 in the same port from January 1816, and the Northumberland 74 from August, seeing some service as flag-captain to Rear-Admiral Sir Charles Rowley at Sheerness before his command was paid off on 10 September 1818. During January 1818 he led his men in fighting a serious fire at Sheerness dockyard which at one time had threatened to envelop an overcrowded workhouse, but in the event was extinguished with only one man suffering any severe wounds.

After leaving the Northumberland Walker retired from active service, but in due course he became the junior rear-admiral on 19 July1821. He died after a short illness on 13 July 1831 at Blatchington near Seaford where one of his sons commanded the coast guard.

He was married twice, firstly to Charlotte Catherine, the daughter of General Sir John Irwin, the commander-in-chief in Ireland, and following her death aged 45 at Tunbridge Wells in December 1819 to Priscilla Sarah Jones, daughter of Arnoldus Jones-Skelton, briefly the MP for Eye, Suffolk, and the brother-in-law of Charles 2nd Earl Cornwallis. He had three sons, the elder of whom, Melville, joined the army, whilst the younger two, Frederick and Thomas, served in the navy, the latter predeceasing him by two years.

Walker was a prot g of both Captain John Lewis Gidoin and Admiral Lord Rodney. He reputedly presented a pleasing cheerful disposition and his reluctance to use corporeal punishment led to the development of a trustworthy and exceedingly well-behaved crew aboard the Bedford.