1770-1852. He was born on 22 January 1770 at Plymouth, the sixth surviving and youngest son of the physician, Dr. John Mudge, and the second child of his third wife Elizabeth Garrett. His elder half-brother was Major-General William Mudge. The family was connected to the Pitt family through an association with the 1st Lord Camelford, and Admiral the Earl of Mount Edgcumbe was Mudge s godfather.

On 1 November 1780 Mudge was entered onto the books of the Foudroyant 84, Captain John Jervis, and he was aboard that ship when she captured the French sail of the line P gase 74 on 20 April 1782, whereupon he joined the prize which was briefly commanded by Captain Hon. George Cranfield Berkeley in home waters.

Following the peace in 1783 he served aboard the Sampson 64, Captain George Hope, and the Perseus 20, Captain George Palmer, which vessel was employed out of Liverpool and off Ireland until she was paid off in February 1787. He saw further service aboard the Leander 50, Captain Sir James Barclay, who flew the flag of Rear-Admiral Herbert Sawyer at Halifax in 1787, and thereafter was employed on the Plymouth-based guardship Bombay Castle 74, Captain Robert Fanshawe.

On 24 May 1789 Mudge was commissioned lieutenant of the Centurion 50, Captain William Albany Otway, the flagship of Rear-Admiral Philip Affleck at Jamaica, and on 26 November he joined the Carnatic 74, Captain John Ford, at Plymouth. On the following 20 January he rejoined the Perseus 20, Captain John Gibson, serving in the Irish Sea and in the Channel for the rest of the year.

In December 1790 he was appointed the first lieutenant of the Discovery which sailed for the Pacific coast of America under Captain George Vancouver on 1 April 1791 to reclaim British territory in Nookta Sound from the Spanish, and to undertake surveys. When certain issues could not be resolved locally Mudge was sent home from Nookta Sound to seek further instructions, the initial part of his voyage being in an open shallop which sailed for China with a crew of fourteen men. He eventually returned home in June 1793 aboard the East Indiaman Lord Macartney.

On 8 February 1794 he joined the Providence 10, Commander William Broughton, as her first lieutenant, which vessel was commissioned to go out to the Pacific to rendezvous with Vancouver but did not leave European waters until the spring of 1795. After reaching north-west America and finding no sign of Vancouver the Providence sailed across the Pacific Ocean to survey the coasts of Asia, and although Broughton continued his work in a schooner after the Providence was wrecked in May 1797 Mudge and many of her crew left for home.

After returning to England he was promoted commander with seniority from 24 November 1797, largely as a result of an application by his brother-in-law, Richard Rosdey, to the mother of Lord Camelford who held some influence with the first lord of the Admiralty, Earl Spencer. Even so, he had to wait a year before he was appointed to the sloop Fly 14 on 8 November 1798.

On 6 February 1799 Mudge captured the Cherbourg privateer Gleneur 6 off Portland after a two days chase. His command later went out to Halifax and narrowly avoided shipwreck on an iceberg off the Newfoundland Banks whilst returning home in May 1800. Thereafter operating off Cherbourg, the Fly took the cutter privateer Trompeur off La Hogue on 24 August, and during the autumn she escorted the trade from the Thames and the Downs to Portsmouth.

Mudge was posted captain on 15 November 1800 and appointed to the Constance 22 early in the following year, being engaged in convoy duty from Falmouth to Portugal, and returning to the Downs with sixty merchantmen under his care in early July. During the voyage home he captured the Spanish privateer lugger Venture 2 off Vigo on 7 June, and a day later took the Spanish national cutter Duides 8 which was bound for Havana with despatches that were thrown overboard in the chase.

The Constance was subsequently in company with the Stork 18, Captain William Parker, when the Spanish privateer Cantara 22 from Corunna was driven onto rocks near Cape Ortegal on 27 July 1801 and brought off under fire from the local militia, her lugger consort mounting ten cannon being taken at the same time. In August the Constance came into Portsmouth and lay-to for a few hours before going out to join the squadron off Le Havre, and in September she was back at Portsmouth to embark the French migr General Count de Viomenel, four subordinate generals, and their staff for Lisbon, this officer being attached to the Russian Army.

On 27 March 1802, whilst the Constance was in Lisbon, Mudge and Captain Charles Davers of the Active 38 were detained from midnight to early the following afternoon by the captain of the guard after protesting over the detention of their barge crews for allegedly smuggling prohibited merchandise. They were released on the intervention of the British ambassador, John Hookman Frere, and HRH the Duke of Sussex, and because of the possible severity of the diplomatic consequences the Constance was immediately ordered home where Mudge reported the incident to the Privy Council so that a proper apology could be demanded. In August she sailed from Portsmouth for Lymington to collect Dutch troops and deliver them to the Elbe.

On 23 September 1802 Mudge was appointed to the Blanche 36, initially serving in the Channel Islands and off Le Havre, where in June 1803 ten men led by her first lieutenant, William Fromow, took a captured fishing vessel into the port and used its familiarity to cut out a heavily laden sloop that was entering the harbour. In July 1803 the Blanche was at Torbay with the West India fleet, and after going out to Jamaica she was employed in the blockade of St. Domingo whilst also enjoying much success against the enemy privateers and in cutting-out expeditions.

During the first week of November 1803 the Blanche s boats cut out the French privateer cutter Albion from under the protection of a battery in Monte Christi, a venture that proved controversial in so much that Mudge credited one of his aristocratic and influential officers, Lieutenant Hon. Warwick Lake, with leading the attack when that officer had provided barely any support to the marine officer, Lieutenant Edward Nicholls. Not long afterwards another of the Blanche s boats with seven men under the command of a master s mate, Edward A Court, captured a French vessel carrying forty soldiers, and it was later reported that Mudge destroyed all twenty-one sail of various descriptions present in Monte Cristo, losing three men killed and eight wounded.

He subsequently assisted Captain John Bligh in the unsuccessful attack on the Dutch island of Cura oa from 25 February 1804, and off the same island he captured the speedy Dutch schooner privateer Nimrod on 29 June and the French schooner Gracieuse 14 on 21 October with troops and despatches that were confiscated. Further prizes were the privateer Hasard 6 on 5 April and the French schooner Amitie 14 on 10 June. 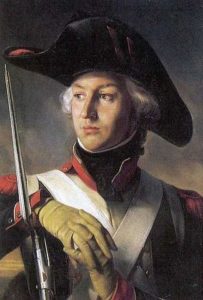 Following the capture of the Blanche Mudge was released home on the orders of Marshal Junot in Portugal.

On 19 July 1805, whilst carrying despatches from Jamaica to Vice-Admiral Lord Nelson at Barbados, the Blanche fell in with a French squadron off Puerto Rico that included the frigate Topaze 40 and the corvette D partment-des-Landes 22. These vessels reduced the Blanche to a wreck after a mere hour-long engagement, and to such effect that she was later set on fire and sunk on the same evening. Upon the arrival of the Topaze at Lisbon in September Mudge and his crew were released without exchange by the French ambassador, General Jean-Andoche Junot, on account of Mudge s earlier rescue of French citizens from a massacre on St. Domingue. He arrived at Plymouth on 8 October aboard the Poulette 18, Captain James Dunbar, and although some commentators asked pertinent questions as to the level and determination of Mudge s defence of the Blanche he was acquitted for the loss of his ship and complimented on his gallant conduct against a superior force following the subsequent court martial aboard the Salvador del Mundo on 14 October, presided over by Vice-Admiral John Sutton.

Remaining at Plymouth, Mudge was immediately given command of the recently captured French frigate Didon 38, which had been captured on 10 August by the Phoenix 36, Captain Thomas Baker, and which was to be renamed the Blanche in honour of his previous command s defence . Instead, on 18 November, Baker was appointed to the Didon and Mudge replaced him on the Phoenix, joining the Channel fleet off Brest in the following month.

In February 1807 Mudge and the Phoenix s sailing master were brought to a court martial at Portsmouth after she had gone aground several weeks before, and as a result Mudge was recommended to pay more attention in future to his subordinate officers, whilst the master was removed from his post. In the middle of March the Phoenix left Portsmouth for Rochefort, and on 4 September Mudge was brought to another court martial, this time aboard the Salvador del Mundo at Plymouth, on charges laid by the Phoenix s dismissed purser, but these were deemed to be malicious and ill-founded by the court presided over by Vice-Admiral Sir John Duckworth.

During January 1808 the Phoenix was obliged to flee from her station off Rochefort when Rear-Admiral Zacharie Jacques Th odore Allemand escaped with six sail of the line, and this officer then subordinated his ships to Vice-Admiral Honor Ganteaume s squadron in their cruise from Toulon which began on 7 February. Shortly afterwards the Phoenix entered Plymouth before leaving on 20 February for a cruise, in which activity she was engaged for the rest of the year with several returns to Plymouth.

In April 1809 the Phoenix was at Portsmouth embarking German troops for convoy out to Lisbon, and she took the French letter of marque Aigle on 29 May whilst returning to Plymouth from Lisbon with despatches. She then spent the summer on the Guernsey station from where she entered Plymouth for repairs after damaging her keel whilst going aground, with the result that two French pilots were court-martialled in November and each deducted three months pay for their error. On 29 January 1810 the Phoenix s boats boarded and captured the privateer Charles 14 on the French coast after a long chase in thick fog, the prize being sent in to Plymouth, and in early April she entered Plymouth after a cruise off Ireland, whereupon she received orders for the East Indies and Mudge relinquished the command.

In July 1814 he was appointed to the Valiant 74, which initially fitted out at Portsmouth for the North American station, but then received orders to sail for Brazil to collect the Portuguese royal family and deliver them to Lisbon. She left Cork at the beginning of October with several convoys and their attendant escort, and whilst in South American waters Lieutenant John Cawley put down a mutiny when Mudge was absent ashore. After returning home she was paid off at Portsmouth in August 1815.

Mudge did not see any further active service but in due course was promoted rear-admiral on 22 July 1830, vice-admiral on 23 November 1841, and admiral on 15 September 1849. He was placed on the retired list on 19 January 1852 and died at Plympton, Devon, on 26 October, being buried in the Holy Cross Churchyard at Newton Ferrers.

On 6 December 1802 at St. Martins-in-the-Field, London, Mudge married Jane Granger, daughter of the rector of Sowton in Devon, and the sister of an Exeter merchant. They had issue one son, Zachary. Jane Mudge died at Sydney, Devon after a short illness on 13 May 1834.

A poor officer, Mudge was renowned for only praising those of his subordinates who were his favourites or came from families of interest, one of the latter being the notorious Hon. Warwick Lake, who as a captain later cast a seaman adrift on a desert island.