1766-1831. He was the third of five sons and eight children of the Reverend Edward Otter and his wife, Dorothy Wright. His father served terms as the vicar of Cuckney, Nottinghamshire, and of Scarcliffe and Upper Langwith, both parishes near Bolsover, Derbyshire, whilst a younger brother, William, became the principal of King’s College, London, in 1831 and was the Bishop of Chichester from 1836-40.

In 1780 Otter joined the navy aboard the Monarca 68, Captain John Gell, which having undertaken an aborted voyage to the Leeward Islands went out to the East Indies in April 1781. Here he fought at the battles of Sadras on 17 February 1782, Providien on 12 April, Negapatam on 6 July, Trincomale on 3 September, and Cuddalore on 20 June 1783.

After returning to England he joined the Nautilus 16, Commander Thomas Boulden Thompson, seeing service off West Africa from 1787 and Newfoundland in the following year, and he was later aboard the Stately 64, Captain Robert Calder, which was commissioned during the Spanish Armament of 1790. He was afterwards a midshipman with Calder aboard the Portsmouth flagship Barfleur 90 and was commissioned lieutenant on 16 November.

Otter was the second lieutenant of the Crescent 36, Captain James Saumarez, which on 20 October 1793 captured the French frigate Réunion 36 off Cherbourg, and he had the honour of being sent to the Admiralty with his captain’s dispatches. He had advanced to become the senior lieutenant of the Crescent when on 8 June she escaped from five large French men-of-war off Guernsey. Removing in the spring of 1795 to the Orion 74 with Captain Saumarez, he fought at the Battle of Lorient on 23 June and as a result was promoted commander on 29 June, although this elevation led to a number of years out of employment.

In May 1801 he was appointed to commission the captured French privateer Actif as the Morgiana 16 at Plymouth, taking dispatches and Brigadier-General Lord William Bentinck out to Egypt from Plymouth at the end of July, and returning to Portsmouth on 9 November with duplicate despatches from Admiral Lord Keith relating to the capture of Alexandria, having also given passage home to Major-General John Moore. It was reported that he delivered the dispatches to the Admiralty in London in the company of Captain Sir William Sidney Smith, who was reportedly dressed ‘in the Turkish fashion’. 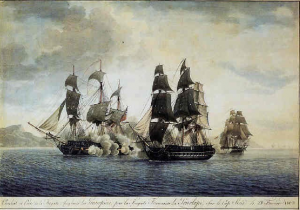 The capture of the Proserpine off Toulon in 1809

The Morgiana went out to Jamaica with Rear-Admiral George Campbell’s unhappy squadron in January 1802, returning to Portsmouth on 9 May after a passage of forty-five days with Otter again going up to the Admiralty to deliver dispatches. He was posted captain with seniority from 29 April, and once more this promotion led to a long period out of employment.

In September 1807 he was appointed to commission the brand new frigate Proserpine 32, described as a large and fine vessel, which after fitting out at Chatham sailed for the Downs in December. She then put out for Gothenburg to collect the British ambassador to Russia, Lord Granville Leveson-Gower, arriving at Yarmouth on 8 January 1808 after a seven day voyage before going out to the Mediterranean with a convoy from Portsmouth in March, having been detained for some time by contrary winds.

The Proserpine subsequently saw duty as the look-out frigate off Toulon but on 27 February 1809 she was surprised by the French frigates Pénélope 40 and Pauline 40 and obliged to surrender with the loss of one man killed and ten wounded after a three-quarter hour resistance, and with two French sail of the line approaching the scene. Otter and his crew became prisoners for the duration of the war, and he was taken to the fortress at Verdun where he remained as the senior naval officer. Here he was joined by his wife who sailed for Morlaix in January 1810 having hired a vessel with five other ladies, and he set up a school for the hundred or so midshipmen before it was disbanded by a new French governor. Following his release at the end of the war Captain Otter and his officers were tried for the loss of the Proserpine on 30 May 1814 aboard the Gladiator 44 under the presidency of Rear-Admiral Edward Foote and were honourably acquitted.

Captain Otter died on 2 June 1831 at his lodgings in York.

He married Elizabeth Stanton at Bolsover, Derbyshire, in August 1806, and his residence was at Southwell, Nottinghamshire.