c1770-1835. He was the son of Major-General Robert Mason Lewis, who at the time of his death in 1800 was the lieutenant-governor of Carisbrook Castle.

Lewis was commissioned lieutenant on 2 November 1790 at the end of the Spanish Armament, and he joined the Assurance 44, Commander William Grosvenor, although it appears unlikely that this vessel put to sea before he left her on 1 February of the following year. During the Russian Armament in 1791 he joined Rear-Admiral Hon. John Leveson-Gower’s flagship, the Formidable 98, Captain Henry Nicholls, as a junior lieutenant, and he also saw service on Admiral Earl Howe’s flagship Queen Charlotte 100, Captain Hugh Cloberry Christian.

He was promoted commander of the sloop Weazle 14 on 14 April 1796, being engaged in convoy duty to the Baltic in the early summer. Concerns that her convoy might be intercepted by eight Dutch and French frigates were allayed when she brought her charges into the Leith Roads, and by the end of July she was at Sheerness. In January 1797 his command captured a French transport with seven hundred men on board which she carried into Cork, and off Lands’ End on 25 September she took the tiny Morlaix-based privateer cutter Entreprenate 1.

Lewis left the Weazle on 2 February 1798 and was appointed to the sloop Snake 18, which completed fitting out at Portsmouth at the end of April and was with Vice-Admiral Sir Charles Thompson’s squadron during the following month at Spithead. She came home from a mission to Lisbon in July and was attached to a squadron led by Captain Robert Carthew Reynolds of the Pomone 44 which was sent to cruise off Le Havre in August. Continuing to operate out of Portsmouth, the Snake returned to that port from a cruise on 15 October, and from the island of Marcou on 1 December, whilst in early March 1799 she was serving off Le Havre under Captain Sir Richard King of the Sirius 36. On 13 September she sailed for Guernsey before proceeding to Marcou, but she was back at Spithead on 19 October when the Impregnable 98, Captain Jonathon Faulknor, went aground off Chichester Harbour, being sent with two other small men-of-war to provide assistance in weather that was fortunately calm. In company with the Eurydice 24, Captain John Talbot, she captured the Calais privateer schooner Hirondelle 14 off Beachy Head on 10 November, and she continued serving in the Channel and off the coast of France before she was ordered to be fitted out and victaulled for foreign service just prior to Christmas. 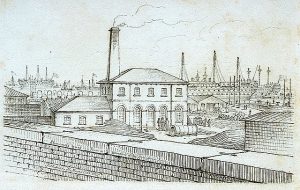 Sheerness Dockyard – where Lewis ended his career as commissioner.

On 13 February 1800, in company with the Melpomene 38, Captain Sir John Hamilton, the Snake departed Portsmouth with the East India and Africa trade, but she had barely left port before she ran afoul of a merchantman, although without suffering any material damage. Whilst off Madeira on 25 March the Snake parted company in a storm, and for several months her whereabouts remained a concern. She eventually turned up at Portsmouth from the African coast on 13 October, having long been given up as lost, and with her she brought a prize. Within days it was reported that Lewis was to be posted captain and appointed to the new frigate Leda 38, but this account proved to be precipitate. Meanwhile, in November his father, Major-General Lewis, died at his residence in Gloucester Place, Portman Square.

Lewis was one of many officers posted captain on 1 January 1801, whereupon he was obliged to leave the Snake. In recognition of his advancement, he was presented to the King in the following month. During August he was appointed to the Braak 24, joining her at Deptford dockyard, but she went aground on the Nore Sands whilst proceeding down the Thames on 3 October, although she did manage to reach the Nore on the next day having suffered minimal damage. A subsequent court martial found the pilot guilty of negligence and he was dismissed the service and mulcted his pay. A week later the Braak was one of several ships recalled to Sheerness, and she remained off the port for the rest of the year before dropping down to the Nore in the spring of 1802. With the French Revolutionary War drawing to a close she was recalled, and she sailed down the Thames on 27 April to be paid off. Thereafter, Lewis did not enjoy the command of a ship at sea.

In November 1810 he was appointed the naval commissioner at Antigua in place of the late Captain Charles White, and he sailed out to assume his position aboard the storeship Malabar. Here he was reportedly active in tackling an immense fire in the English Harbour dockyard after it was struck by lightning on 6 October 1815. With the end of the Napoleonic War the dockyard in Antigua diminished in importance, and in March 1816 it was announced that Lewis was to remove his establishment to Bermuda. He remained in this post for the next seven years, whilst upon returning to England in the winter of 1820-1 he was presented to the King at a levee.

In June 1823 it was announced that he was to succeed Commissioner Isaac Wolley at Malta. On 23 October he left his post at Bermuda aboard the Glasgow 44, Captain Bentinck Cavendish Doyle, and he landed with his family at Portsmouth a month later on 22 November. He then departed with his family for Malta from Portsmouth on 14 February 1824 aboard the Phaeton 38, Captain Henry Evelyn Pitfield Sturt. but was landed fifteen days later on Gibraltar as all the men-of-war at the Rock were required to parade off Algiers due a dispute with the Dey.

Lewis was recalled in July 1825 to take up a position on the Navy Board, although it was not until May 1826 that he arrived home aboard the yacht Herald, Captain Henry John Leeke. During March 1828 he attended the King at a huge levee, and in February 1829 he left the Navy Board to become the resident commissioner at Sheerness. Here on 4 July, he was active in extinguishing a fire in the town, much to the approbation of the locals. The residents were less friendly on 14 April 1830 when Lewis and three constables tried to protect a warden who had correctly accused an artificer of stealing stores and was hunted down by a baying mob at the dockyard gates. Lewis reportedly suffered several injuries from bricks and stones in the riot that ensued.

He retired as a superannuated rear-admiral on 9 June 1832 with a pension of £994 per annum, and he was presented once more to the King by Admiral Sir Thomas Hardy that same month.

After displaying signs of increasing mental instability, Admiral Lewis shot himself at his residence of No. 2 the Avenue Road, St. John’s Wood Road, Regent’s Park, London on 1 May 1835 and he died despite the attempts to save him by his son and two women, described in some quarters as his daughters.

In April 1802 he married a Miss Ottey, of Lower Tooting, Surrey. She died in Chelsea in the spring of 1814. Shortly before his suicide he claimed to have married one of his servant girls. His son, John Lewis, was a lieutenant in the Hon. East India Company, whilst two daughters and a sister-in-law lost their lives to fever on Bermuda in 1819.

One obituary described Lewis as ‘an eccentric man’.