1729-1801. He was baptised on 27 February 1729, the seventh son of thirteen children of John Hicks, a clergyman long associated with Exeter Cathedral, and of his wife, Mary Passmore.

Having run away from home, Hicks obtained a berth in April 1742 aboard the Norfolk 80, Captain Thomas Graves, which vessel returned home from Jamaica that summer. He saw further service in the Mediterranean on the Marlborough 90 with Captain Graves, and thereafter Captain James Cornwall, who succeeded to the command but was killed at the Battle of Toulon on 11 February 1744. Thereafter Hicks was aboard the Monmouth 70, Captain Henry Harrison, which prior to being paid off at the end of the War of Austrian Succession in 1748 saw a great deal of action in the Channel and the Western Approaches.

In April 1754 he was rated a midshipman aboard the Bristol 50, Captain Samuel Marshall, and subsequent service was with Captain Thomas Graves, the son of the officer with whom he had first gone to sea, aboard the Hazard 8 off Brest, and the Sheerness 20 from the summer of 1755. After passing his lieutenant’s examination on 1 December 1756 Hicks was employed aboard the Marlborough 90, Captain Robert Faulknor.

On 3 May 1758 he was commissioned lieutenant of the Lively 20, Captain Francis Wyatt, serving at Jamaica. Whilst employed aboard the Maidstone 28, Captain Dudley Digges, Hicks was stabbed outside the gates of Sheerness Dockyard by two men in August 1759. Going on half-pay at the peace of 1763, he remained unemployed for the next fifteen years.

In June 1775 he was appointed the first lieutenant of the Actaeon 28, Captain Christopher Atkins, sailing for North America in the following February. This vessel was later abandoned and set on fire the day after Commodore Sir Peter Parker’s unsuccessful attack on Charlestown on 28 June 1776. In October Hicks joined Atkins aboard the Aeolus 32, but with this frigate under orders for Jamaica he transferred two months later to the Terrible 74, Captain Sir Richard Bickerton.

The appointment to the Terrible could not have been a more providential move, for it was to be his good fortune that despite nearing the age of fifty, Hicks found himself promoted commander on 13 May 1778 as a beneficiary of the King’s review of the fleet at Spithead, having been senior lieutenant aboard the yacht Princess Augusta which had conveyed the lords of the Admiralty under Bickerton’s orders. It was indeed a close shave for Hicks, as just three months earlier he had been recommended for a position as an agent of transports, and this appointment would most likely have been a path to obscurity. 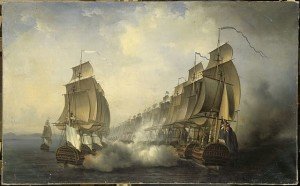 Captain Hicks fought at the Battle of Cuddalore in 1783, some forty years after witnessing his first major action

In the same month, May 1778, Hicks commissioned the French-built schooner Helena 14, but he suffered the misfortune of running into the French fleet on 16 September, and having lost her bowsprit three hours previously his command was easily captured by the French frigate Sensible 34. The latter’s captain treated the officers of the Helena with every courtesy, and they were taken into Brest and allowed to travel on parole to Guingamp in Brittany. Having been exchanged in January 1780, Hicks was acquitted of any blame for the Helena’s loss, but for a short while he remained on half-pay. The Helena herself did not remain long in French hands, for the Channel Fleet re-captured her in July 1779.

On 10 November 1781 Hicks was posted captain of the Gibraltar 80, and in February1782 sailed with the broad pennant of his patron, Commodore Sir Richard Bickerton, who had been ordered to join Vice-Admiral Sir Edward Hughes in the East Indies with four other sail-of-the-line and two frigates. The squadron took many months longer than anticipated to reach its station, and when it finally arrived on 21 October the ships were ridden with scurvy. The Gibraltar fought at the Battle of Cuddalore on 20 June 1783 where she lost six men killed and forty wounded, and after returning home she was paid off in July 1784.

Hicks had the command of the Jupiter 50 from August 1786 until the following February, it being intended that she carry Bickerton’s broad pennant as commander-in-chief designate out to the Leeward Islands, but in the event the latter did not take up the appointment. During the spring of 1791 he commissioned the Cambridge 80 as the flagship to the promoted Rear-Admiral Bickerton at Plymouth. This vessel was paid off in September when Hicks recommissioned the St. George 90 as Bickerton’s flagship. After his patron’s death in February1792 he briefly flew the flag of Rear-Admiral Sir Richard King at Plymouth, retaining her until November.

In December 1792 Hicks commissioned the Powerful 74 at Plymouth, and going around to Portsmouth he set sail on 25 March 1793 with Rear-Admiral John Gell’s squadron prior to being detached in escort of an East India convoy, which he accompanied almost as far south as the island of Tristan de Cunha before sailing north to St. Helena to collect the homeward-bound trade. Whilst off that island on 1 August he had the immense good fortune to capture a French East Indiaman, the Comtesse de Trautmansdorff, bound from Bengal and Pondicherry for Lorient with goods estimated to value over one hundred thousand pounds, or nearly £15m in today’ money. Leaving that island on 3 August with two East Indiamen, the Powerful arrived in the Downs at the end of September. As a consequence of her absence in the south Atlantic the Powerful was not present when Gell’s squadron captured the richly laden French privateer General Dumourier and her prize, the Spanish register ship St. Jago on 14 April, and despite a subsequent appeal Hicks and his crew missed out on the huge sum of prize-money that was eventually awarded to the rest of the squadron. He left the Powerful shortly after reaching home and did not see any further employment.

Hicks was promoted rear-admiral on 1 January 1801, and he died at his recently constructed residence of Maisonette, Stoke Gabriel, Devon on 9 May that year. A wall monument to his memory was erected in the church at Stoke Gabriel.

His first wife, Lucy Redding, whom he had married in the early 1760’s, bore him a daughter before her death at Puddletown, Dorset in 1775. He married secondly Jane Hyde Champion of Salisbury on 26 September 1775, by whom he had a further five sons and three daughters. Two of his sons entered the Navy, Thomas Bickerton Ashton Hicks and Edward Buller Hicks both achieving the rank of lieutenant, and one of his daughters married Captain Edward Kendall.

Vice-Admiral Sir Edward Buller was a godson to Hicks’ son. Suffice to say that the Graves family and Sir Richard Bickerton had a great influence on Hicks’ career and their influence was able to facilitate an aged officer’s unlikely promotion and subsequent employment.