With war against France inevitable, a grand fleet began commissioning at Spithead in the spring of 1778 under the command of Admiral Hon. Augustus Keppel. Ever anxious to involve himself in the administration of the realm, and being an attentive follower of all matters naval, King George III resolved to make ‘an informal visit’ to Portsmouth where he felt his presence would add some impulse to the fleet’s preparations. It would not be the King’s first journey to a naval establishment that year, for he had only recently returned to London from Chatham and Sheerness where he had seen at first hand the newly commissioned Victory 100, which was being fitted out by Commodore Sir John Lindsay..

Admiral Keppel might have thought the visit an unwelcome imposition at a time when his officers and men were busily preparing their ships for sea, the more so that the French Toulon fleet was known to have departed the Mediterranean, and there was an urgent requirement to detach some reinforcement for their likely destination, the North American station. Some reassurance came prior to the royal visit when Lord Sandwich, the first lord of the Admiralty, wrote on 28 April requesting that Keppel arrange an entertaining and informative reception for the King, but advised that he should not hesitate to put to sea if circumstances dictated – after all such a spectacle would be the ‘highest entertainment’ the Royals could be provided with.

At 6 a.m. on Saturday 2 May the King and Queen left the Queen’s House, known today as Buckingham Palace, for their carefully planned journey to the coast, it having been calculated that with sets of fresh horses dotted along the route to Portsmouth they would be able to travel at twelve miles an hour. Escorted by a regiment of dragoon guards, they were met four miles out of Portsmouth by a party of rope-makers who had ventured from the town to greet them, and who ran ahead of the carriage which by now had also attracted a posse of local gentlemen on horseback. The entourage arrived at a rainy Portsmouth on schedule at 12.45 to the cheers of the assembled workmen, and the local populace sung ‘God Save the King’ and the guns of the garrison were fired as Their Majesties were escorted to the Commissioner’s House to be received by the Earl of Sandwich at the head of a small group of dignitaries. At 5.30 that evening the King left the house to tour the dockyard where he viewed the storehouses and the ships in the dock that were under repair or being refitted. 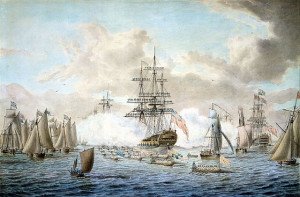 A Georgian Fleet Review – the one depicted was in 1773

The next day, Sunday 3 May, saw the great and good attend the Royal Garrison Chapel where a service was given by the Reverend George Cuthbert, chaplain to the King and vicar of Portsmouth, following which a levee was held for the members of the Corporation, the admirals and captains of the fleet, and the local nobility.

The King was up bright and early on the fine morning of Monday 4 May to leave the dockyard at 7 a.m. and to head for the gun-wharf, where he inspected the ordnance stores and storehouses before returning to the dockyard an hour later. At 9.15 the Queen was escorted to the royal barge by the Earl of Sandwich, and putting out of the dock her barge was preceded by that of the port admiral, Sir Thomas Pye, and attended by some fifty other barges drawn up in four regular lines carrying the admirals and captains of the fleet. Queen Charlotte was saluted by four sail of the line and a frigate within the harbour as she was rowed by, and once out into the open water the guns of Southsea Castle, the fort, the blockhouses, and the platform blasted out their own obeisance. At 9.30 she went aboard the royal yacht Princess Augusta which was moored at Spithead, and further out to sea the fleet at anchor saluted her with twenty-one guns each. The royal barge then made its way back to the dock for the King to step aboard at 10.15, and also attended by the admirals and captains of the fleet in their barges, and being steered by Captain Sir Richard Bickerton of the Terrible 74, he was rowed out to Spithead with the same ceremony as his consort; however, rather than repair on board the royal yacht he was instead rowed through the men-of-war to receive three cheers from each ship and the salute of the merchantmen lying in Stokes Bay off Gosport.

At 11.30 the King’s royal standard was raised aboard Keppel’s flagship, the Prince George 90, to the accompaniment of a further twenty-one-gun salute from the assembled men-of-war. Meanwhile the Princess Augusta had also made her way through the fleet to the cheers of the seamen, and at 12.30 the Queen received her own twenty-one-gun salute as the yacht passed the Prince George. During this time, the King had been watching the crew of the flagship manning the cannon and small-arms and had then received all the captains of the fleet on the quarterdeck. At 1 p.m. he descended into his barge, and preceded by Admiral Pye’s barge, and followed by those of the admirals and captains, he went aboard the Princess Augusta to dine under an awning with the flag officers, generals, and the members of his suite. The festivities continued until 6 p.m. when the King took to his barge to be rowed around the fleet once more before returning to the royal yacht which headed into the harbour with the usual ceremony, allowing Their Majesties to disembark at 8.30, land at the dockyard, and retire to the Commissioner’s House.

On Tuesday 5 May the King left the Commissioner’s house at 6.30 in the morning to walk down into the dock where the Burford 70 was being caulked, and he then spent an enjoyable hour or so studying the sheathing of the Centaur 74, which he described as ‘quite compleat’. At 9. o’clock Their Majesties went to the Glacis near Southsea Common to review a Regiment of Foot commanded by Lieutenant-General Lord George Lennox, and then Queen Charlotte, who was revelling in the devoted loyalty that the officers and men were displaying towards her husband, went up onto the ramparts where a pavilion had been erected for her benefit, allowing her to view the fleet before returning to the Commissioner’s House at 1 p.m. Meanwhile, watched by an adulating crowed, the King visited the new fortifications that were being erected to protect the dockyard, and he rejoined the Queen at 1.30. That evening he toured the rope-houses, the Royal Naval Academy, a number of storehouses, and went aboard the St. George 90 before finally retiring at 8.15.

On the morning of Wednesday 6 May the King revisited the rope house with the Queen at 9.30, and whilst his consort returned to the Commissioner’s House he took to his barge and went on to examine in more detail the brew-house before returning to the dockyard at 12.30. Thereafter taking to foot, he walked into Portsmouth to visit the victualling office, storehouses and marine barracks, then returning to the dockyard he toured the rigging-house and returned to the Commissioners’ House at 1.30. At 6 p.m. the King and Queen walked across to the smith’s-shop to view the repair of an anchor, and after visiting the stone docks where ships were being built or repaired they retired at 7.30.

During these days of activity King George had been continually plagued with letters from the nervous prime minster, Lord North, who had strong reservations over his ability to conduct a war with France and wanted to resign his office. If the monarch was concerned with the troubles emanating from London he did not show it, for he could not have been happier as he chatted away to all and sundry, showing a keen interest in the mechanics of the seaman’s trade, and that of the dockyard artisans. He also spent some time with Sandwich and Keppel discussing the dispositions of the fleet, and oblivious to the irony that his visit had diverted them from the task of preparing for sea, he urged the prompt dispatch of a squadron to shadow the French Toulon fleet. 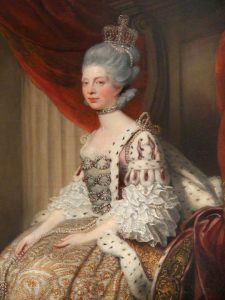 Thursday 7 May was a particular stormy day that put paid to any tours of the facilities, so instead the dockyard artificers congregated before the Commissioner’s House to sing in honour of the Queen as she stood at an indoor window. At 11.30 Their Majesties set off to visit the Earl of Halifax at his nearby seat of Stanstead Park from where they returned at 3.30. Still keen to pack as much in as possible, the King took to his barge at 6 p.m. to visit the Britannia 100 and Royal William 84 before returning to the Commissioner’s House at 8 o’clock.

On the final morning of the visit, Friday 8 May, the King was out of his temporary residence at 6.30 to descend into the dock and observe the hull of a 28-gun frigate being coppered. Remaining there for a good half-hour, he then joined the Queen at 10 o’clock to take to the barge and be rowed out to the Princess Augusta, which in turn passed through the fleet out to St. Helens and thence to the Motherbank. That evening at 6 p.m. the yacht went into Stokes Bay to sail through the merchant shipping, and she then entered the harbour from Spithead at 7.30 to the salutation of the ships of the fleet and the works ashore. At 8 o’clock Their Majesties landed and proceeded to the Commissioner’s House where the dockyard artificers gave them three cheers before dispersing.

Having extended his review from five days to a week in order to see Rear-Admiral Hyde Parker’s North America-bound squadron of eleven sail of the line drop down to St. Helens, the King and Queen finally left Portsmouth for London at 8.30 on the morning of Saturday 9 May to arrive at the Queen’s Palace at 4.30, having been acclaimed by throngs of people at Petersfield and Godalming on their journey home.

Several days after the conclusion of the royal visit each vessel at Portsmouth received additional supplies from the King to thank them for their part in the review. For the officers involved there were honours galore; the commissioner Captain Samuel Hood, and the officer who steered the royal barge, Captain Sir Richard Bickerton, were both created baronets, and Captain Digby Dent of the port commander-in-chief’s flagship was knighted. Commanders Anthony Parrey, Thomas Gaborian, and Farmery Epworth were posted captain, and a whole array of lieutenants and midshipmen were promoted, the former including such future luminaries as William George Fairfax, Robert Simonton and Philip Patton, the latter including Lord Robert Manners and Lord Charles Fitzgerald. Having been senior lieutenant aboard the yacht Princess Augusta, Lieutenant Thomas Hicks was promoted to the rank of commander, as was the senior lieutenant of Vice-Admiral John Montagu’s flagship, Abraham Crespin.

Not everybody was so pleased with the proceedings, and in the House of Commons the opposition complained of the fleet lying inactive at Spithead for the ‘mere parade of a naval review’ whilst the Toulon fleet was already at sea. But clearly the visit had been a success, and for a time at least any differences over the commitment to war against the American colonies was set aside as the officers and men, the artisans, and citizens, displayed their devotion for a King who cheerfully reciprocated it and did much to raise the morale of the navy prior to resuming hostilities with the old enemy, France.

Ships involved in the fleet review: