Died 1804. He was the illegitimate son of the Earl of Albemarle, the nephew of Admiral Viscount Keppel, and the cousin of Admiral Hon. Sir George Cranfield Berkeley.

Keppel was commissioned lieutenant on 14 May 1774 and promoted commander on 18 March 1777. In June of that year he joined the Swift 14 at New York, to which vessel he had previously been appointed. 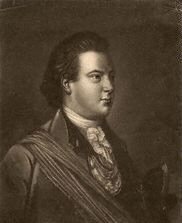 Keppel was the natural son of the Earl of Albemarle

He was posted captain on 26 January 1778 and joined the Ardent 64, flagship of Rear-Admiral James Gambier. This ship went out with a convoy to New York in March, and after a difficult passage was with Vice-Admiral Lord Howe in his defence of that city in July and the subsequent operations off Rhode Island during August. The Ardent was thereafter attached to Vice-Admiral Hon. John Byron’s fleet before that officer s departure for the Leeward Islands and the previous return of Howe to England left Gambier as the temporary commander-in-chief in North America.

In November Keppel exchanged with Captain Samuel Clayton into the Iris 32, which vessel had previously been the American frigate Hancock, commanding her through to the following July. In November 1779 he commissioned the new Vestal 28 which he took out to Newfoundland in April 1780, and in company with the sloop Fairy 16, Captain Hon. George Berkeley, he took the rebel privateer Phoenix 16 on 10 September together with the American packet Mercury which was carrying despatches announcing a treaty between the rebellious United States and the Netherlands. Also aboard the Mercury was Henry Laurens, the American president of Congress, who was taken to England and imprisoned in the Tower of London.

Thereafter he was in command of the Fortitude 74 from the spring of 1782 with the flag of Vice-Admiral Mark Milbanke in the North Sea, prior to participating in the Relief of Gibraltar on 18 October as a private ship. Upon returning home Keppel joined the brand new crack frigate Hebe 38, cruising in the Channel and retaining her through to October 1783 before being removed by his uncle, the first lord of the Admiralty. He was then obliged to flee Britain for France on account of his financial affairs.