In early May the dull-sailing sloop Porcupine 20, Captain Hon. William Clement Finch, arrived in the Delaware River from England with despatches announcing the imminent commencement of hostilities with France. The news that the Porcupine brought for the commander-in-chief of the North American station, Vice-Admiral Lord Howe, was not unexpected, but it would signify a complete change of direction for the British in their struggle to maintain control over the American colonies. With the French in the game Howe now decided that it was paramount to defend the economically strategic New York, and as consequence the decision was made to abandon the hard-won city of Philadelphia.

Orders were quickly despatched to vessels cruising in the Chesapeake and to the larger men of war at New York and Rhode Island instructing them to effect a rendezvous with the commander-in-chief off the Delaware, so that the his fleet and the army transports could enjoy the maximum protection on their voyage north. Somewhat controversially, knowing that Howe was already intending to return to New-York, the orders pertaining to the ships in that port and Rhode Island would be rescinded by the hopeless Rear-Admiral James Gambier who was commanding at New York. Even so, this little affected the situation, as it had already been decided that the Army, under the command of Major-General Sir Henry Clinton following General Sir William Howe s Howe s departure to England aboard the Andromeda 28, Captain Henry Bryne, in May, would have to march some ninety miles to the city across New Jersey rather than run the risk of being destroyed at sea by any French arrival.

With the assistance of the Navy, Clinton s twelve thousand troops evacuated Philadelphia and were carried across the Delaware to begin their march on 18 June. For several days thereafter adverse winds and calms kept Howe s ships pinned in the Delaware, and it was not until 28 June that he was able to break out of the river. Leaving the experienced Captain Sir Andrew Snape Hamond of the Roebuck to cruise off the Virginia Capes with a small squadron, the admiral instructed the bulk of his fleet and the store-laden army transports to make the best of their way north whilst he pressed on ahead for New York. In company with his flagship Eagle were the Maidstone 28, Captain Alan Gardner, and the Trident 64, aboard which were the new peace commissioners, the Earl of Carlisle, William Eden, and George Johnstone.

On the morning of the 29th Howe fell in with the packet Grantham carrying despatches from England dated 2 May. These advised that the French Toulon fleet of twelve sail of the line and five frigates commanded by Vice-Admiral Charles, the Comte d’Estaing, had put to sea on 15 April, and her captain provided the further information that the French had chased the packet near the American coast to the south only days previously. The despatches also confirmed the departure of Vice-Admiral Hon. John Byron from England on 9 June in chase of d Estaing s fleet. Given that the French had been at sea for two and a half months it appeared lamentable that the Admiralty was only now able to apprise Lord Howe of their departure, and the apparent lack of haste on behalf of the administration must have confirmed in his mind his recent decision to join his brother in tendering their resignations.

Arriving off Sandy Hook on 30 June, a day before the rest of his fleet and transports came in, the commander-in-chief set about preparing the defence of New York against the impending arrival of the French. Immediately Gambier was ordered to send the men-of-war out from New York to Sandy Hook, which given its protuberance on the southern, New Jersey, side of the bay overlooking the main channel and the bar across to Staten Island provided an ideal position from which to defend the entrance to the harbour.

On the morning of 5 July the Maidstone, which had been returned southwards four days earlier by Howe in company with the sloop Zebra, Captain Henry Colins, spotted d Estaing s fleet some one hundred and twenty miles to the east of the Delaware. After shadowing them northwards the frigate was herself detected and chased on the afternoon of the 6th, but Captain Gardner kept in contact with the French and sent Lieutenant James Vashon off in a privateer to warn Howe of d Estaing s position. This officer arrived off Sandy Hook on 7 July, and on the same evening the Roebuck came in from her patrol off the Virginia Capes with confirmation of Vashon s news. Then on the 9th Gardner arrived with the Maidstone to report that he had left the French fleet at anchor off Cape Henlopen the morning before.

Following a desperately slow passage across the Atlantic, the Toulon fleet had appeared to the south of the Delaware in the early hours of 8 July, driving the frigate Mermaid 28, Captain James Hawker, onto Assateague Island and forcing her crew to surrender to the Americans. The French fleet consisted of the 90-gun flagship, one of 80 guns, six of 74 guns, three of 64 guns and one of 50 guns, and it was far more powerful than the poorly manned British fleet of six 64-gun ships, three of 50 and two of 44. If, with a little more luck, it had been able to fulfil its original orders of trapping Howe s smaller fleet in the Delaware then the results could have been catastrophic for the British campaign, as the supply line to their Army would have been severed. But all was not lost, for if d Estaing could capture New York before Howe was able to organise an effective defence then the British army marching north through New Jersey would still be sandwiched between the French fleet and American army. It was thus somewhat curious that d Estaing tarried about the Delaware for a couple of days before commencing his voyage north towards New York.

On 11 July the Zebra arrived at Sandy Hook with news that she had seen the French fleet the night before on a course for New York, and at midday the French finally hove into view, coming to anchor that afternoon off Shrewsbury Inlet four miles south from Howe’s fleet which was sheltered behind the bar between Sandy Hook and Staten Island. The scene for a great battle appeared set. 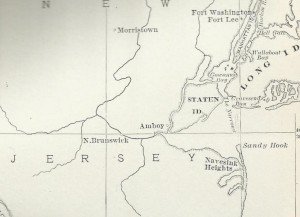 By now the ever-efficient Howe had taken the precaution of studying the tides and personally taking soundings in the main channel, and under the supervision of the excellent captain of the fleet, Henry Duncan, he spent the next twenty-four hours deploying his fleet and giving precise orders to his captains. Supporting a five-gun battery next to the lighthouse on the end of the Hook, and anchored along the southern end of the Channel to protect the bar, were the 64-gun vessels Eagle, Ardent, Nonsuch, Somerset and Trident, the Isis 50 and the storeship Leviathan, which had been manned by volunteers and armed with cannon from the Artillery. In such a position with springs on their cables these ships would be able to rake any enemy vessels which attempted to cross the bar. Behind the Leviathan were the bombs Carcass and Thunder, alongside of which were a mobile reserve consisting of the St. Albans 64 and three frigates. The Preston 50, Phoenix 44 and armed ship Vigilant were anchored on the bar three miles east of Sandy Hook with instructions to annoy the French if they attempted a crossing. They were then to withdraw to the rear of the fleet. Finally four galleys were placed at the narrowest part of the channel to the north with orders to retire to the Long Islands shallows once they had disputed any French crossing of the bar.

A thousand volunteers from the transports and victaulling vessels in the port were brought out to supplement the crews of the men-of-war. They were joined by a number of soldiers from General Clinton s army which had arrived on the Heights of Navasink south of Sandy Hook on 30 June after a difficult and disputed march across New Jersey from Philadelphia, and had then crossed via a bridge of boats to Sandy Hook Island on 5 July in order to be transported up to New York. Such was Lord Howe s popularity that a number of local ship-owners offered up their own vessels to act as fireships as necessary, others offered to take to sea in order to alert Vice-Admiral Byron of the French presence, and there were so many volunteers amongst the local loyalists that they had to draw lots for the honour of serving Howe. Even then the losers attempted to sneak their way aboard the men of war. 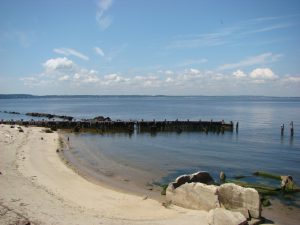 Strong though the defence was, it could do little to prevent British ships and convoys being snapped up by the French fleet on a daily basis as it sat outside the bar waiting for experienced American pilots to arrive. Lieutenant Richard Whitworth of the Roebuck s tender Stanley had been most successful in taking five prizes, but these were all lost, as was his command and liberty, when he was discovered at daybreak having anchored amidst the French fleet the night before. At least twenty vessels were captured in total, but more fortunate was a convoy from Nova Scotia under the escort of the Hope 14, Lieutenant William Hancock Kelly, which was warned off by the loyalist vessels that had managed to get out to sea from New York.

Meanwhile the American rebels had been sending supplies and provisions out to the French from the New Jersey shore, but when General Washington finally sent across the experienced pilots they wasted little time in telling d Estaing that his larger ships would be unable to cross the bar without unloading their cannon. The cautious French admiral threw his natural inclination to the winds and offered a huge bounty to any pilot willing to take the fleet in, but it was a pointless offer and nobody accepted it. He therefore remained in the offing for ten days whilst he sent his own officers to sound the bar and pondered over his next move.

On 21 July the British observed that the traffic from New Jersey to the French fleet had ceased, and this gave them some indication that a movement was likely. The next morning the wind was north-easterly, favouring a French advance, and with a high, thirty-foot spring tide facilitating an easier crossing of the bar an attack at last seemed imminent. Raising anchor at 8am, d Estaing s fleet began working its way to windward. A denouement now appeared inevitable with the future of the whole war hanging on the meagre British fleet s ability to defend its position and the safety of the Army before such a superior force. Throughout the morning and into the early afternoon the men waited at their stations whilst the senior officers no doubt raged at the government s failure to make an earlier reinforcement by Vice-Admiral Byron one that would have tipped the balance in their favour.

But there wasn t to be a battle. Admiral d Estaing posed off the bar at the height of the tide before taking off to the south at 3 pm. With concerns over the damage his fleet would have inevitably sustained in disputing the bar with Howe, and with the threat of then having a weakened force trapped in New York by the imminent arrival of Byron, the decision had been made with Washington to attack Rhode Island instead.

Through contrary weather, indecision, but most crucially the brilliant defensive strategy of Lord Howe, the French and their new American allies had missed the chance to achieve a defining victory, and a British disaster had been averted.