@1730-1786. He was the son of a Plymouth wine merchant and his wife, the daughter of a local alderman, and he became the father of Admiral Edward Hawker and the brother-in-law of Rear-Admiral Lucius O’Brien.

Hawker entered the navy in 1743 aboard the Shrewsbury 80, Captain Solomon Gideon, as a servant to the first lieutenant, Lucius O’Brien, with the ship serving in home waters. He moved with the latter officer to the storeship Portsmouth, which was at Lisbon in the early part of 1744, and he was employed thereafter with Captain O’Brien aboard the Sheerness 20, which saw service off Scotland. Continuing with Captain O’Brien, he was employed aboard the newly launched Ambuscade 40 for a brief three months in the summer of 1746, and then the Colchester 50 until 1748. He next joined the Unicorn 28, Captain Molyneux Shuldham, which was fitting out at Plymouth for the first six months of 1749, before transferring in July to the small sloop Peggy 8, once more serving with Captain O’Brien who commanded that vessel from 1749-55 whilst generally seeing employment on the coast of Scotland.

On 31 December 1755 Hawker was commissioned lieutenant upon his re-appointment to the Colchester, which was once again commanded by Captain O’Brien. In 1757 this vessel sailed to meet the East India convoy at St. Helena, and two years later she was with Admiral Sir Edward Hawke’s fleet off Brest.

Hawker was promoted commander on 6 August 1761, and he joined the bomb vessel Granado 8 which was fitting out at Portsmouth before sailing for the Leeward Islands in October. Here she served in Rear-Admiral George Rodney’s attack on Martinique in early 1762. During March he exchanged with Commander Stair Douglas of the sloop Barbadoes 14, in which he left Admiral Sir George Pocock’s fleet in sight of Cuba on 28 May, just weeks prior to the reduction of Havana. After arriving at Plymouth on 26 June, Hawker raced up to London with Pocock’s dispatches to reach the Admiralty two days later. Thereafter, the Barbadoes spent much of the remainder of the year at Spithead, and she was taken into Portsmouth Harbour in January 1763 to be paid off. 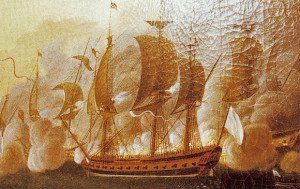 In April 1763 he recommissioned the French prize Sardoine 14, sailing for New York in July to arrive there after a passage from Falmouth of nine weeks and three days. His command was at Philadelphia in the early autumn of 1765, and after returning to Plymouth in the early autumn of 1766 she set off once more for the North American station. Hawker was to earn some notoriety at the port of Charlestown in South Carolina where he spent most of 1767 insisting that the merchant marine obey the law pertaining to the collection of Customs documentation. On one occasion his boat’s crew was attacked whilst attempting to board a schooner, and Hawker was warned that if he ventured ashore, he would be served in the same manner. Nothing daunted, he ordered all of his boats to be manned, and with the British flag in his hand he stood at the bow of the headmost craft and confronted a mob who had boarded the schooner in an attempt to defend it. A stand-off followed until the proper papers were produced. The Sardoine arrived in the Thames from South Carolina towards the end of February 1768, having earlier put into the Scilly Isles amidst much concern that she had gone missing, and she was paid off in March.

Hawker was one of a dozen officers who were posted captain on 26 May 1768, being appointed to the Echo 24 for apparent purposes of rank only, as she does not appear to have gone to sea under his command. In March 1770 he recommissioned the Aldborough 24, in which was employed for the next three summers on the Newfoundland station. Initially, she sailed out in May 1770 before arriving back at Plymouth in the autumn, from where she put out on the Impress Service on 9 December. After returning to Newfoundland in May 1771, she came back to Plymouth on 3 December, having put into Cadiz for water and been treated coolly in comparison to a French frigate which came in a few days afterwards. Her final voyage to Newfoundland commenced in May 1772, and after returning to England Hawker was superseded in command of the Aldborough in February 1773.

During April 1776 he recommissioned the frigate Mermaid 28 at Plymouth, arriving at Portsmouth from that port on 5 September, and then sailing for North America with a dozen transports on 14 September. In June 1777 he was cruising off Seal Island near Cape Sable on the southern tip of Nova Scotia, and when news was received of a rebel presence in the St. John’s River, he led the naval detachment sent to dislodge it, although in effect his mere arrival had the enemy scurrying for the woods around the harbour from where they would later be driven off by the army. Continuing on that station, he joined Commodore Sir George Collier in thwarting the attempt of American forces at Machias to invade Nova Scotia by destroying their accumulated stores and inflicting a great deal of damage on the local shipping. He also captured the rebel privateer Active 12 on 18 November along with several other prizes.

On 8 July 1778, the Mermaid was chased into the Delaware River by the Comte d’Estaing’s newly arrived Toulon fleet. Hawker ensured that all of the frigate’s cannons and small arms were thrown overboard before he drove her ashore on Assateague Island and surrendered to the Americans. Initially incarcerated at Philadelphia in reportedly disagreeable circumstances, he was released on parole when it was acknowledged that he had always treated his American prisoners with ‘humanity and tenderness’, and he returned to England.

In July 1779 he recommissioned the Iris 32, which as the-American frigate Hancock had been captured two years previously, and after going out to North America in November he cruised off Nova Scotia. On 6 June 1780 his command fought the French frigate Hermione 36, Captain Louis-René-Madeleine-Levassor de Latouche Tréville, off New York in a bloody encounter which left both ships disabled and caused casualties of seven men killed and nine wounded on the British side, as opposed to ten killed and thirty-seven wounded on the French side. The question of which captain terminated the engagement remained unresolved despite much correspondence, and with Latouche Tréville insisting that his was the best vessel on the coast and that the Iris had run away. The dispute was still emotive enough to incur Vice-Admiral Lord Nelson’s wrath some twenty-four years later when Latouche-Tréville commanded the Toulon fleet, and Nelson the Mediterranean fleet.

Having exchanged with Captain George Dawson of the Renown 50 on 1 August 1780, Hawker sailed from New York on 5 September with a convoy of approximately one hundred and fifty vessels for European ports, and after arriving off Cork on 10 October his command proceeded to England.

On 10 November 1780 he was appointed to the Hero 74, taking her around to Portsmouth from Plymouth in February 1781 to join Commodore George Johnstone’s Cape-bound expedition, and in which he was present at the Battle of Porto Praya in the Cape Verde Islands on 16 April. During this engagement the Hero received special attention from the French, and in the subsequent, unsuccessful, pursuit of the enemy squadron, Hawker flew a commodore’s broad pennant. However, by now he was in poor health, and after leaving the Hero he returned from St. Helena aboard the Jason 32, Captain James Pigot.

Hawker saw no further employment and retired to Plymouth; in which town he owned several properties. During the trial of Captain Evelyn Sutton in December 1783, he gave evidence favourable to that officer with regard to his conduct at the Battle of Porto Praya.

Captain Hawker died on 23 March 1786. A monument to his memory was erected in Charles Church, Plymouth.

He married Dorothea O’Brien, the sister of his early patron, Rear-Admiral Lucius O’Brien, with whom he had three sons and five daughters. Three of his daughters married future admirals, these being Vice-Admiral Charles Boyles, Vice-Admiral Edward Oliver Osborn, and Rear-Admiral Sir Michael Seymour. Another daughter married Sir William Knighton, who became the private secretary and keeper of the Privy Purse in the service of King George IV. Two of his sons joined the army and one, Edward, became an admiral in the navy.

In his early days, Hawker was a protégé of Admiral Sir George Pocock, the M.P for Plymouth, who arranged his promotion to the rank of commander. He was well-regarded and respected in North America during the dispute over customs papers in 1767, being considered ‘genial’. Other commentators described him as amiable, polite, and humane.