1743-98. He was born on 25 March 1743, the son of Captain John Linzee and his wife, Rose Guisage of Kingston, Portsea, Hampshire. He was the cousin of Admiral Robert Linzee and of Susannah Linzee, who married the future Admiral Lord Hood in 1749. He was the father of Vice-Admiral Samuel Hood Linzee. 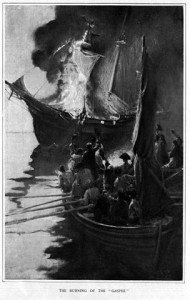 The burning of the Gaspee

As a young man Linzee served aboard the Romney 50, Captain John Corner, flying the broad pennant of his kinsman, Commodore Samuel Hood, the commander-in-chief of the North American station. He was commissioned lieutenant on 13 October 1768 and immediately assumed the temporary command of the schooner Halifax 6 which was based at Portsmouth until the end of the year. In March 1769 he rejoined Hood aboard the Romney 50, returning to North American waters, and by May 1770 he had become that vessel s first lieutenant.

In October 1770 he was appointed to the temporary command of the Beaver 14 off Rhode Island, being engaged in anti-smuggling operations, and his promotion to commander was confirmed on 19 January 1771. He was in Antigua with the Beaver in the spring before returning to Boston shortly afterwards. On 9 June 1772 his tender, the Gaspee, grounded near Providence, Rhode Island, and was boarded by over one hundred and fifty townspeople who were aggrieved by the despotic tendencies her commander, Lieutenant William Dudingston, had displayed in stopping and searching their trade. In an incident that would become famous as a prelude to the full scale American rebellion, Dudingston was shot and ordered over the side with his crew before the Gaspee was burned to the waterline. Linzee was arrested by the civil authorities in the aftermath of this affair for refusing to hand over a Negro witness who he had threatened with a whipping and hanging, and an Admiralty commission of inquiry subsequently criticised him for his callous behaviour . Having returned to Portsmouth with his new American wife he left the Beaver at the end of October 1772.

Linzee was appointed to the sloop Falcon 14 at Portsmouth in October 1774, and after going out to Boston in the following February his command formed part of the naval support at the Battle of Bunker Hill on 17 June 1775. In early August the Falcon was off Cape Ann, where having pressed some local men into service she captured one schooner off Gloucester and chased another into the harbour where it was run aground. When Linzee sent his boats in to board the stranded schooner they were fired upon by the local militia, and although some thirty men got aboard they soon became trapped. In an attempt to create a diversion he ordered another party to fire the town, and he also sent the prize schooner in to attempt the recovery of his men. Unfortunately these moves proved to be of no avail, and his gunner and thirteen men were taken prisoner to Dartmouth when the grounded schooner was retaken by the rebels.

On 16 February 1777 Linzee was posted captain of the Camilla 20 by Vice-Admiral James Young at Antigua in the re-organisation brought about by the death of Captain Thomas Wilkinson of the Pearl 32. He was subsequently dismissed from this command in early May by Vice-Admiral Lord Howe on the vessel regaining her proper station in North America, as the latter considered that the appointment should only have been made by him. Any disappointment Linzee may have suffered was but temporary, for he was removed from the Falcon and re-appointed to command the Pearl on 21 May, serving thereafter in the Philadelphia campaign from August-November, the defence of New York in July 1778, and operations off Rhode Island during August. In December he arrived at Barbados with the news that Vice-Admiral Hon John Byron s fleet was sailing to reinforce the Leeward Islands station, and shortly afterwards he exchanged with Captain Alexander Graeme of the Diamond 32 before returning home with a convoy in the following September. Whilst in passage to England he shared in the capture of two French West Indiamen, and upon her arrival the Diamond was briefly and unsuccessfully sent in chase of John Paul Jones who had been wreaking havoc off the northern coasts of Britain before being paid off in November..

After a period on half-pay Linzee was appointed to the recently commissioned and poorly manned Spanish prize Santa Monica 36 at Portsmouth at the end of August 1780, which frigate he took out on a short cruise at the beginning of November. In December he sailed to join Rear-Admiral Sir Samuel Hood s reinforcements for the Leeward Islands. Following Hood s withdrawal from the waters around Martinique after the Battle of Fort Royal on 29 April 1781, Linzee played an active part with Captains Robert Linzee and Hon. John Rodney in leading a small force that manned the batteries to successfully defend St. Lucia against a French attack on 11 May. On 16 July, and with the assistance of Captain John Stanhope of the Pegasus 28, he suppressed a mutiny aboard the Santa Monica at English Harbour, Antigua, but not before one man had been shot by the marines after Linzee had initially attempted to resolve the issue by persuasion. He was then attached to Hood s fleet when it sailed to North America in August, being present at the Battle of Chesapeake Bay on 5 September, before returning to the Leeward Islands at the end of the year.

In January 1782 exaggerated reports of the mutiny aboard the Santa Monica began appearing in the home newspapers, with one suggesting that after Linzee had placed forty men in irons he had been thrown overboard and the frigate carried into Martinique, and another stating that the men had refused to fight a French frigate of inferior force and after throwing Linzee over the side had taken her into Guadeloupe. In any event the unhappy crew of the Santa Monica did not have to wait long to be liberated from the unpopular Linzee, for on 1 April the Santa Monica was run aground on the island of St. Johns off Tortola to prevent her from sinking after she had struck an uncharted rock. All her crew bar one man, together with the stores and personal possessions, were salvaged, and the sloop Pacahunter 14, Commander Isaac Coffin, and brig Germaine 16, Commander George Augustus Keppel, were on hand to convey the men to Jamaica.

After a long period of unemployment Linzee commissioned the Penelope 32 at Plymouth in December 1788, going out to the Leeward Islands in February 1789 and later serving at Halifax where he briefly held the chief command pending the arrival of Vice-Admiral Sir Richard Hughes on 1 August 1789. After leaving her in November 1790 he did not see any further employment. He subsequently resigned from the Navy on the death of his wife in October 1792 and retired to North America.

Captain Linzee died on 8 October 1798 at his residence in the Milton County of Norfolk, Massachusetts.

He married Susannah Inman, the daughter of a loyalist from Cambridge, Massachusetts, on 1 September 1772 and was the father of Vice-Admiral Samuel Hood Linzee and eight other children.

Linzee was thorough to a point of fussiness, and was prone to interfere in his officers duties. He often failed to carry out his regular threats of punishment, preferring instead to dish out instantaneous justice through kicks and blows which in themselves were not seen as barbarous , but were something his men found confusing, unbecoming of a commanding officer, and inconsistent with the discipline they expected. His wife was often present at the various stations on which he served.