The Vestal, Henry Laurens, and the Dutch Treaty – 10 September 1780

Throughout 1780 the Netherlands had been wavering over whether to join the League of Armed Neutrality, which had been formed by Russia, Sweden and Denmark in February to protect their commerce with Spain and France from the Royal Navy’s interference. The principle Dutch concerns were the preservation of their foreign colonies and of their status as the leading trading nation with Spain and France, although unofficially they also had no scruples over trading with the American colonies, or of smuggling goods into Britain. 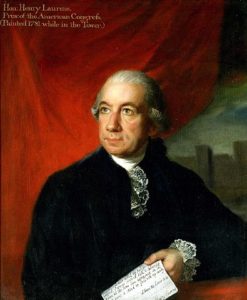 Relations between Britain and the Netherlands had deteriorated after the incident on New Year s Eve 1779 when Captain Charles Fielding’s squadron had intercepted a Dutch convoy off the Isle of Wight and demanded to search it for suspected French contraband. Despite the ensuing outcry, Britain had resolved to maintain a hard line with the Dutch and in August had advised that any attempt by them to join the League of Armed Neutrality would be met with a declaration of war.

The underlying British hostility was fuelled by the knowledge that the French canal system could sustain the conveyance of stores inland to Nantes from the Netherlands, with the result that any British blockade of France could be easily negated. The only method of preventing this replenishment of France was for Britain to extend its blockade to the Netherlands, and that meant declaring war on the Dutch. Ideally an excuse for doing so had to be effected before the Netherlands joined the League of Armed Neutrality, otherwise Britain would automatically find itself involved in a war with the other members, Sweden, Russia, and Denmark.

It was at this point that a fortuitous capture provided Britain with the diplomatic vindication it required to declare war. On 10 September an American packet, the Philadelphia-based Mercury, was run down off the Newfoundland Banks by the Vestal 28, Captain George Keppel, in company with the Fairy 14, Commander Hon. George Berkeley. As the British frigate prepared to take possession of her prize a new fifteen-year-old recruit by the name of Michael Fitton was aloft furling the fore-topgallant sail. The youngster saw what he believed to be a man tumble overboard from the Mercury and immediately shouted a warning, but when a British seaman dived into the water to attempt a rescue he came up instead with a canvas bag weighted with lead shot that had proved insufficient to sink it. When the bag was opened it was found to contain some very interesting documents.

The significant papers had been in the care of an American diplomat, Henry Laurens, a South Carolina merchant and ex-president of the Continental Congress, who was taking passage from Philadelphia to Holland aboard the Mercury. Crucially, Keppel found them to include a draft treaty of amity and commerce between the rebels and a representative of the city of Amsterdam that had been drawn up at Aix-la-Chapelle in 1778. In itself this treaty was hardly illegal, but the British Government was able to construe it and other retrieved papers detailing Dutch financial aid to the rebellious American colonies as being to all intents and purposes, equivalent to actual aggression.

Unfortunately for the Dutch, they were informed shortly afterwards by Russia that the League of Armed Neutrality could not guarantee the defence of their colonies, and with the French and Spanish fleets otherwise engaged they now found themselves somewhat exposed. Despairingly, they began to make preparations to join the League of Armed Neutrality, but using the pretext of the Vestal’s discovery Britain declared war on 20 December before their membership could be confirmed.

Immediately the navy instigated a blockade of the Dutch coast under the command of Vice-Admiral Francis William Drake, and later Commodore Hon. Keith Stewart. The Dutch fleet, effectively consisting of three sail of the line and some thirty smaller two-deckers, was unable to deal with the light British units deployed against it, and soon the Dutch economy ground to a standstill. Meanwhile Laurens was detained in the Tower of London, the first and only American to be so incarcerated, and he remained there until the end of 1781 when he was exchanged for Lieutenant-General Lord Cornwallis, who had been defeated at the Battle of Yorktown.

As for Michael Fitton, the young man whose eagle if mistaken eye had enabled the retrieval of the vital incriminating papers, although he would be celebrated in fiction for his later career he would never rise above the rank of lieutenant, despite enjoying some success in the French wars in independent command. His failure to advance through the ranks was ascribed to his ten-year desertion from the navy from the end of 1783 after Captain Keppel, whom he had followed to the Aeolus 32, Fortitude 74 and Hebe 38, had been obliged to flee for France to avoid a debtor’s prison.