1762-1809. He was the son of the Reverend George Inman, the rector of Burrington in Somerset.

Inman entered the service in 1776 under the patronage of the son of another Somerset clergyman, Captain Sir Samuel Hood, who commanded the Courageux 74 in home waters from the summer of that year. Two years later he joined the Lark 32, Captain Richard Smith, and after going out to North America this vessel was beached and set on fire to prevent her capture by the French fleet during operations around Rhode Island in August 1778. Inman was then employed in the shore batteries before joining the Pearl 32, Captain John Linzee, in which he sailed for the Leeward Islands prior to returning to England. 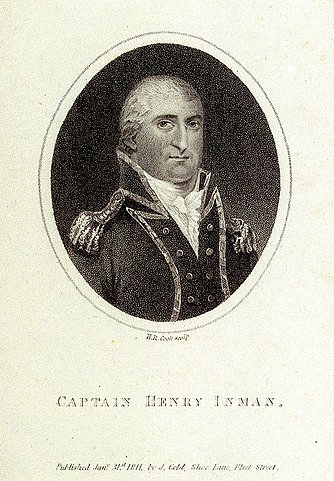 Inman was commissioned lieutenant on 14 June 1780 and went back to the West Indies aboard the store ship Camel 24, Captain John Pakenham, transferring to Captain Linzee s frigate Santa Monica 36, and serving thereafter in the Leeward Islands. Unfortunately he again suffered the loss of his ship when the Santa Monica was run aground on the island of St. Johns off Tortola on 1 April 1782 to prevent her from sinking.

He was quickly appointed first lieutenant of the Hector 74, Captain John Bourchier, which ship had been captured at the Battle of the Saintes on 12 April, but was in poor repair due to the damage she had sustained in the engagement. Departing for England with Rear-Admiral Thomas Graves squadron, the Hector became detached from her consorts during August and on 4 September had to repel the attack of two enemy frigates, the Aigle 40, and Gloire 32, during which action Inman assumed command when Captain Bourchier was severely wounded. Shortly afterwards the Hector was dismasted in the Central Atlantic Hurricane which claimed so many of Graves convoy when it struck on 16 September. As the Hector s weakened crew was further degraded by a high proportion of invalids her chances of survival seemed bleak, but Inman kept the exhausted men at the pumps with a brace of pistols in his hands, although some perished through the effects of their ensuing toil. Providentially the tiny Dartmouth-based privateer Hawke, Captain John Hill, arrived just as the Hector was on the verge of foundering and her crew was conveyed in trying circumstances to Newfoundland. There Inman was chaired through the streets of St. Johns by the seamen who readily credited him with their astonishing salvation.

After returning to England he succumbed to a fever as a result of his exertions on the Hector, and with the arrival of the peace he remained ashore on half pay in Somerset. During the Spanish Armament of 1790 he was employed initially as a lieutenant aboard the Latona 38, Captain Albemarle Bertie, but towards the end of the year he assumed command of the cutter Pygmy 14, which was based at the Isle of Man for the next two years, and where he was well regarded by the populace.

Upon the commencement of the French Revolutionary in 1793 Inman found employment aboard Vice-Admiral Lord Hood s flagship Victory 100, Captain John Knight, going out to the Mediterranean. During the Occupation of Toulon from August to December he was promoted commander on 11 September and appointed to the French frigate Aurore 36. For the following two months this ship was engaged against a couple of unmasked batteries near Hy res, with her relentless bombardment often destroying the works only for them to be promptly rebuilt. After serving in the Corsican campaign from the following February Inman was sent to Gibraltar with a shipload of French prisoners who hatched a plan to recapture the Aurore, and when that failed they attempted to hole her. Upon arrival at Gibraltar he wisely left the French aboard the sinking vessel so that they would either repair her or drown.

Inman was posted captain on 9 October 1794, and after a brief appointment to the San Fiorenzo 36 he joined the Romney 50, whose captain, Hon. William Paget had died at sea in September. Both the Romney under Inman and the San Fiorenzo under Captain Sir Charles Hamilton then returned home with a convoy from Gibraltar, reaching Plymouth on 18 November. In the following February the Romney was reported to be fitting out for sea under his command, but he left her shortly afterwards and in April was appointed a regulating captain in Lincolnshire.

During 1797 Inman appears to have commanded the Lion 64 on a temporary basis before apparently exchanging with Captain Manley Dixon into the worn-out Espion 36 during the early summer. Ordered to make for the River Clyde where she was to be employed as a guardship, and setting sail with his family aboard, he was forced to enter Sheerness by poor weather. As the Espion could not be immediately repaired she was put in Ordinary and he went on the beach once more.

From November 1797 until April 1798 he commanded the Belliqueux 64 on a temporary basis for the indisposed Captain John Inglis, and as this ship had been prominent in the mutiny at the Nore he was obliged to sleep with his pistols at hand for fear of a further uprising. During the latter part of 1798 and into the new year he endured a trying period in command of the Ramillies 74 at the blockade of Brest on a temporary basis for Captain Bartholomew Rowley. 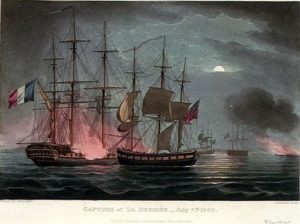 After so many years of temporary commands Inman was deservedly appointed to the plum frigate Andromeda 32 at Sheerness in January 1799, in which he took a convoy out to Hamburg towards the end of the year and then formed part of the North Sea fleet that evacuated the Duke of York s army from the Netherlands. As a reward for his kindness towards them on this service the officers of the 20th Regiment awarded him with a vase. Sadly on the evening of 4 May 1800 an explosion of powder aboard the frigate when she was lying off Margate left a number of men blinded. After a time commanding a squadron off the River Elbe he conceived a plan to attack the enemy shipping in Dunkirk, and on 7 July led the squadron that cut out the D sir e 38, the success of this mission being mainly due to his clever use of the experimental 32-pounder sloop Dart 30, Commander Patrick Campbell.

Inman commissioned his prize, the D sir e, as a 36-gun frigate in August 1800 and was present at the Battle of Copenhagen on 2 April 1801, having been amongst a select band of officers who had dined with Nelson the night before. Four of his men were wounded during the engagement and the frigate remained grounded for two days after the battle. When peace was declared at the beginning of the following year Inman left the D sir e, for although she was recommissioned for the West Indies he preferred to retire ashore.

Following the resumption of the conflict with France Inman briefly had the Utrecht 44 in the autumn of 1803 as flagship of Rear-Admiral Robert Montagu in the Downs. In 1805 he recommissioned the Triumph 74 and served under Rear-Admiral Charles Stirling off Rochefort before participating in the Battle of Finisterre on 22 July, suffering five men killed and six wounded. He was a principal witness at Vice-Admiral Sir Robert Calder s subsequent court martial in December, and after his return to duty the Triumph formed part of Rear-Admiral Sir Richard John Strachan s squadron in the chase of Rear-Admiral Jean Baptiste Philibert Willaumez s force. In May 1806 Inman resigned his command on the grounds of ill health to be replaced by Captain Sir Thomas Masterman Hardy.

Having next commanded the Sea Fencibles at Kings Lynn, Inman was appointed Admiralty Commissioner at Madras at the end of 1808, going out aboard the Clorinde 38, Captain Thomas Briggs. Sadly he became deranged on the voyage and ten days after arriving in India he died at Madras on 15 July 1809.

Inman married Catherine a sister of Commander Thomas Dalby in May 1791 and had a son and daughter. The astronomer and artillerist James Inman was his nephew. The address in his will was given as Clapham Common, London, although his family later resided at Reading in Berkshire.

He was well regarded by Nelson and his career benefitted from his early friendship with Lord Hood.