Balfour was commissioned lieutenant on 5 May 1745 and promoted commander on 15 November 1756 of the fireship Aetna for service in the Downs and North Sea. He also undertook, convoy duty to Portsmouth with this vessel, and returned to that port from Ireland with a convoy in December 1757.

Continuing with the Aetna, he took her out to North America in early 1758 with Admiral Hon. Edward Boscawen’s fleet, and during the siege of Louisbourg that summer he and Captain John Laforey were ordered by Boscawen to lead six hundred men in a boat attack on the two French ships of the line that were still afloat in the harbour. Balfour fulfilled his instructions by carrying the Bienfaisant 64, a success that tipped the siege in the British favour and led to the French seeking terms. As a reward he was posted captain of the Bienfaisant with seniority from 26 July 1758. 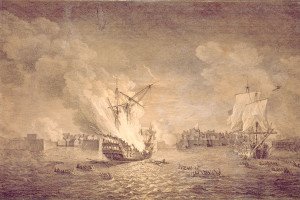 The capture of the French Bienfaisant at Louisbourg, depicted on the right of this painting

During the return to England, Boscawen’s depleted squadron fell in with the French fleet on its passage home from Quebec, but stormy weather prevented any serious exchange. Given the Bienfaisant’s lack of powder, her jury-masts, and the large number of French prisoners aboard, the avoidance of an engagement was perhaps somewhat fortuitous. Balfour’s new command later went aground when approaching Portsmouth and threw out a signal of distress, but she was able to re-float, whereupon she was taken into dock for repairs.

At the end of February1759 the Bienfaisant came out of dock at Portsmouth to enter the basin, and she remained there for the next couple of months as her repairs were completed. In early May she finally went out of harbour to be employed in the Grand Fleet under Admiral Sir Edward Hawke that summer. During September she was with the fleet off Brest, and whilst on this duty she joined the Monmouth 70, Captain Hon. Augustus John Hervey, in chasing three enemy men-of-war back inshore. She arrived at Plymouth from the Bay of Biscay towards the end of October and was placed under the orders of Rear-Admiral Francis Geary, whose squadron had been ordered to join Admiral Sir Edward Hawke, but which arrived too late to participate in the Battle of Quiberon Bay on 20 November. The Bienfaisant was back in Plymouth Sound by Christmas Day where she remained for some months, and where she was driven from her moorings in February 1760, although without sustaining any damage. She then undertook a return voyage to Ireland in March.

Retaining the Bienfaisant, Balfour sailed for the Leeward Islands from Plymouth with three sail of the line under the orders of Commodore Sir James Douglas at the end of March 1760, and his command returned to the Downs with a large convoy in September 1761. She then entered dock at Portsmouth prior to sailing out of the harbour at the end of November and dropping down to St. Helens to depart under sealed orders with a squadron for Gibraltar. The Bienfaisant continued to serve in the Mediterranean during 1762, but the only matter of interest arose when Balfour had to confine his lieutenant of marines, Alexander Dunn, who had slipped into insanity, and who upon being returned to England would famously attempt the assassination of the radical journalist and politician, John Wilkes. Balfour was sent with a small squadron to take possession of Minorca following the peace in 1763, and after returning to England the Bienfaisant was paid off in August.

In October 1770 he was appointed to the recommissioned frigate Venus 36, which sailed out of Portsmouth Harbour for Spithead at the beginning of December and departed with sealed orders at the end of January 1771. She was back at Portsmouth by the end of April, having apparently stood-to off Lisbon without having any communication with the Portuguese other than to send ashore a complaint regarding inconveniences that had been suffered by British traders at that port. She next received orders to be docked, and in July was instructed to fit out ‘in the most elegant manner’ for the conveyance of the Duke of Gloucester to the Mediterranean. On 13 August the duke and his suite embarked at Portsmouth amongst much pomp and circumstance, and in company with the Alarm 32, Captain John Jervis, they sailed for Lisbon that evening. During September the duke visited Gibraltar and Minorca, in October was at Leghorn and Genoa, and the Venus returned to Spithead without the royal, but with his baggage, towards the end of March 1772 to enter harbour and be paid off. 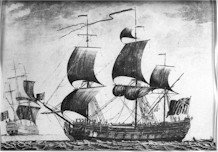 Following his departure from the Venus, Balfour was immediately appointed to the Royal Oak 74 at Portsmouth, which sailed with a squadron for Plymouth in June 1772. On 8 December she was taken into dock at Portsmouth, and in April 1773 she was ordered to undertake guard-ship duties at the port before Balfour left her in November.

On 10 July 1776 he was appointed to the newly commissioned Culloden 74 at Deptford, which vessel arrived at Portsmouth from the Downs on 22 September to take up duties as a guardship. She remained at Spithead throughout the winter before being ordered to cruise off Cape Finisterre in February 1777 in search of rebel shipping, and in the prevention of supplies to the American rebels. She came back to Portsmouth on 26 April, having sent in a South Carolina prize estimated to value thirty thousand guineas, and she then returned to the Bay of Biscay to continue her patrol. She was back in Portsmouth on 14 June, and four weeks later went out of harbour for Spithead where she remained until getting under way on 7 November with three other sail of the line under the orders of Captain Hon. Robert Digby of the Ramillies 74 to cruise in the Channel. This force returned to Portsmouth on 29 December with several prizes, and on 4 February 1778, having been strengthened, it put to sea on another cruise before returning to port on 4 April.

The Culloden next joined Vice-Admiral Hon. John Byron’s fleet which sailed for North America on 9 June 1778. Having separated from the admiral in the desperate storms which afflicted that expedition, Balfour’s command endured a three-month voyage before reaching Nova Scotia. Upon leaving Halifax on 4 September, the Culloden ran into another atrocious storm and could only seek salvation by scudding all the way back to Milford Haven in Wales. When she reached that port on 13 December it was with hundreds of her men in distress from scurvy, although she had at least been able to capture the rebel privateer General Washington 18 on 16 October during her return. An additional threat to her safety was nullified when an attempt by an Irish midshipman by the name of Murphy to muster the large number of American and French prisoners aboard her and take possession of the ship was discovered on 29 November. Her return was not without its criticism however, and one Irish newspaper acerbically suggested that the same wind which had blown the Culloden eastwards to Wales had also driven the Somerset 68, Captain George Ourry, westwards onto the American shore.

The Culloden arrived at Spithead from Milford Haven on 1 May 1779, and the mutineer Murphy was found guilty by a court martial on 11 June and sentenced to hang. Shortly afterwards the Culloden went out of harbour to Spithead having been copper-sheathed, and here she briefly flew the flag of the local commander-in-chief, Admiral Sir Thomas Pye. She dropped down to St. Helens at the beginning of July, and after sailing to join the Channel Fleet was present during Admiral Sir Charles Hardy’s retreat in August, and in the fleet’s subsequent cruise from 22 October.

On Christmas Day 1779 the Culloden set sail with Admiral Sir George Rodney’s fleet bound for the relief of Gibraltar, and she assisted the Prince George 98 in forcing the surrender of the San Julian 70 at the Moonlight Battle off Cape St. Vincent on 16 January 1780, although she did not suffer any casualties. Towards the end of March she was docked at Portsmouth, and after a refit she sailed out of the harbour on 23 May to depart on 2 June for the Leeward Islands with dispatches. Joining Rodney’s fleet, she sailed north to New York in the autumn, and on 17 October captured the Boston privateer Washington 20 after a six-hour chase. The Culloden was then one of four sail of the line left which were left behind in North America when Rodney sailed for the Leeward Islands on 16 November.

Having been detached under the orders of Rear-Admiral Thomas Graves with two other sail of the line to intercept a similar number of French vessels that were looking to bring in a convoy, the Culloden was wrecked on Long Island on 23 January 1781 during a fierce gale. The storm also dismasted the Bedford 74, Captain Edmund Affleck, who skilfully re-masted the Bedford with the wrecked Culloden’s redundant spars and was thus able to rejoin the fleet in time to participate at the Battle of Cape Henry on 16 March. Balfour, who served as a volunteer for six weeks aboard Vice-Admiral Marriot Arbuthnot’s flagship Royal Oak 74, was present in this action and was sent home with the admiral’s despatches to arrive at the Admiralty on 24 April.

He next commissioned the Conqueror 74 at Plymouth in May 1781, commanding her in the Channel fleet campaign of June-November, and by the beginning of December his vessel was at Portsmouth. She departed for the Leeward Islands with Admiral Sir George Rodney’s reinforcements on 14 January 1782, although not before she had collided with the Hercules 74, Captain Henry Savage, in Torbay six days earlier during a storm. The Conqueror fought at the Battle of the Saintes on 12 April, suffering casualties of seven men killed and twenty-three wounded, and then sailed with the fleet for North America under the new commander-in-chief, Admiral Hugh Pigot. Upon returning to England after the peace in 1783 the Conqueror reached Plymouth in early August where she was decommissioned. Balfour did not see any active service thereafter.

In 1787 he was one of the most senior captains who were superannuated as a rear-admiral, in effect being passed over for promotion in favour of those considered to be worthier officers below him on the Captain’s List. Admiral Lord Howe’s position as first lord of the Admiralty became untenable following parliamentary concern over this decision, leading to his resignation on 16 July 1788.

He was married, his wife’s name being Mary, and had issue at least four sons and a daughter.

Balfour was regarded as a thorough practical seaman, and it was much regretted by his contemporaries that he did not obtain the elevation to flag rank that his abilities and experience