1747-1814. Born in October 1747, he was the third son of the Reverend John Graves of Castle Dawson, County Londonderry, Ireland, and of his wife Jane Hudson. He was the nephew of Admiral Samuel Graves, and the cousin once removed of Admiral Lord Thomas Graves. His three brothers, Samuel, John and Richard, all became superannuated admirals, as did his cousin David Graves.

Having entered the navy at an early age, Graves served under his uncle, Captain Samuel Graves, aboard the Duke 90 in the Seven Years War, and after the peace in 1763 was employed aboard the Antelope 50 under his cousin Thomas Graves. He then moved to the Edgar 64, again under his cousin’s broad pennant in 1765, serving off Africa where he was promoted lieutenant of the Shannon 38, Captain Philip Boteler, on 30 October, although the vessel passed out of commission shortly afterwards. 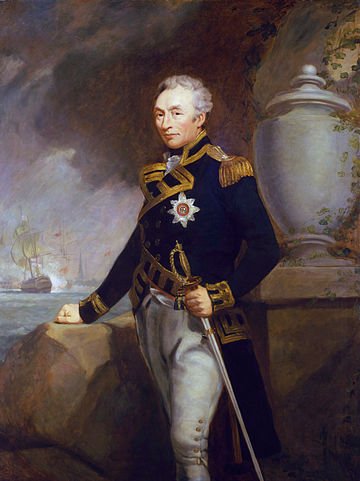 He thereafter remained unemployed until the Falkland Islands dispute of 1770 when he saw duty in the Portsmouth Impress Service. Returning to sea, he served as a lieutenant of the frigate Arethusa 32, Captain Andrew Snape Hamond, going out to North America in October 1771. Three years later he joined the Racehorse 18, Captain Hon. Constantine Phipps, which sailed to the Arctic Sea during 1773, being paid off in October of that year.

In the spring of 1774 Graves returned to the North American station aboard the Lively 20, Captain Thomas Bishop, and was promoted by the commander-in-chief, his uncle, to the command of the schooner Diana 4, which was armed with thirty men and four two-pounder guns. For some time he was employed against smugglers at Boston, but on 27 May 1775 the becalmed Diana grounded on the receding tide of the Charles River and was surrounded by two thousand colonials with two field guns. After a brave defence Graves was badly burned when the rebels set the Diana alight, as was his brother John who had been sent in a boat from the flagship Preston 50, Captain John Robinson, to attempt a rescue.

Graves remained on the North American station in command of several other small tenders including the Spitfire which was present during the Battle of Bunkers Hill. He then briefly commanded the bomb Bolton before returning to England aboard the Preston following his uncle s recall in early 1776. He returned to America with the Preston, Captain Samuel Uppleby, bearing the broad pennant of Commodore William Hotham in the same year, and arriving in time to take part in the New York campaign of July – October.

On 5 May 1781 Graves was posted captain and placed in temporary command of the Bedford 74 for the absent Captain Edmund Affleck. On 5 September he fought under his cousin at the Battle of Chesapeake Bay.He then became flag captain to Affleck who had been promoted commodore, and he commanded the Bedford with great distinction at the Battle of St. Kitts on 26 January 1782 where she lost two men killed and fifteen wounded, and the Battle of the Saintes on 12 April, where she suffered seventeen men wounded and took a most prominent part under Afflect s broad pennant..

In the autumn of 1782 he commissioned the recently captured French frigate Magicienne 36, sailing from North America for Jamaica in December, and on 2 January 1783 he fought the superior Sibylle 32, Captain the Comte de Kergariou Locmaria, to a standstill off San Domingo, his own vessel being totally dismasted in the ferocious close action. The French vessel was obliged to retire as other British ships were coming up, but her damage allowed her to be taken three weeks later on 22 January 1783 by the Hussar 28, Captain Thomas Macnamara Russell. Following a much needed refit in Jamaica the Magicienne returned to England and was paid off in September 1783.

During the peace Graves visited France, but he thereafter remained unemployed well into the French Revolutionary War. Finally in 1799 he was appointed to the Cumberland 74 in the Channel fleet bearing Rear-Admiral Sir Richard Bickerton s flag from September, and after acting as a commodore in 1800 he was promoted rear-admiral on 1 January 1801.

The Battle of Copenhagen 1801

In March 1801 he raised his flag aboard the Polyphemus 64, Captain Richard Retalick, in the fleet sent to the Baltic under Admiral Hyde Parker, and he then shifted it with his captain to the Defiance 74 to serve as second-in-command to Vice-Admiral Nelson at the Battle of Copenhagen on 2 April. He too ignored Parker s signal to withdraw from the battle, even though he had originally been opposed to Nelson s plans, fearing that attacking stone walls would prove to be a losing game. During the action his flagship lost twenty-four men killed and fifty one wounded. Graves received the thanks of parliament and was created a Knight of the Bath for his conduct on the day, being knighted by Nelson on the quarterdeck of the St. George 90 in Kioge Bay on Sunday 14 June. After then taking to his bed in ill-health for some weeks he returned to Yarmouth in July before departing once more, this time to join Admiral Archibald Dickson off the Texel with his flag aboard the Monarch 74, Captains Thomas Peyton and Peter Puget. Following months of further ill-health he lowered his flag in January 1802 and returned to England.

After the resumption of hostilities he went back to sea in November 1803 with his flag aboard the Foudroyant 80, Captain Peter Spicer. Initially adverse weather kept him within the confines of Plymouth and prevented him from joining the Channel fleet until February 1804, whereupon he assumed the command of the Inshore Squadron off Brest. Bar a short period in May when he flew his flag on the Colossus 74, Captain James Nicol Morris, he continued in this vessel with Captain Peter Puget as his flag captain from the spring of 1804 until he suffered an accident aboard in late October, whereupon Graves marital kinsman, Captain Christopher Nesham, took on the acting-captaincy until the following February. Graves squadron drove a small French force back into port in July, but on 11 January 1805 he unfortunately let the Rochefort squadron out, although in his defence their flight was in such appalling weather that it caused the Foudroyant to be docked. In June, by which time Captain Puget had been re-appointed his flag-captain in succession to Captain John Tremayne Rodd, he was detached from the Channel fleet with seven sail of the line to blockade Rochefort again, but was superseded shortly afterwards by Rear-Admiral Charles Stirling. He returned to the Channel fleet and lowered his flag towards the end of 1805.

He was married twice, initially at Greenwich on 22 August 1771 to Bridgit Mariah Bacon, the sister of Colonel Phillip Bacon by whom he had issue a daughter, Mary, who was born in 1772 but did not marry, and on 20 August 1808 to Susanna Blacknell of Packham, Suffolk, who survived him by less than two years.

The burns Graves sustained in 1775 were visible for the remainder of his life and his subsequent portrait. He was regarded as personally brave.