1769-97. Born on 5 September 1769 in Patshull, Staffordshire, he was the younger son of Admiral Hugh Pigot and of his second wife, Frances Wrottesley.

In May 1782 Pigot entered the Navy aboard the Jupiter 50, Captain Thomas Pasley, the flagship of his father on his voyage out to assume the command of the Leeward Islands station, moving on arrival at Jamaica into the Formidable 90, Captain James Samber. From October 1783 to August 1785 he served in North American waters aboard the Assistance 50, Commodore Sir Charles Douglas, afterwards joining the Trusty 50, the pennant ship of Commodore Sir John Laforey in the Leeward Islands.

On 21 September 1790, during the Spanish Armament, he was appointed the fifth lieutenant of the Colossus 74, Captain Hugh Christian, who was later succeeded by Captain Henry Harvey, and in April 1792 he joined the Assistance 50, Captain John Samuel Smith, which was bound for Newfoundland. From April 1793 he served under Captain Richard Keats aboard the London 98, and in the following January he joined the Latona 38, Captain Edward Thornbrough. 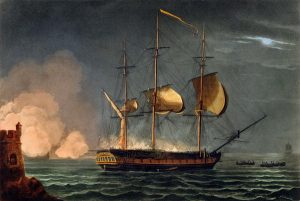 On 10 February 1794 Pigot was promoted commander of the fireship Incendiary and eleven days later his influence brought him the command of the Swan 14, going out to Jamaica in the following month and serving at the capture of Port au Prince on 4 June.

He was posted captain of the frigate Success 32 on the Jamaican station on 1 September 1794 and was placed off Irois on the extreme western coast of Saint-Domingue during the spring of 1795 to assist the inhabitants in defending their settlement against the French. As Pigot was a favourite of the commander-in-chief, Vice-Admiral Sir Hyde Parker, he was allowed a number of pocket-lining cruises, and in the course of one the Success captured the privateer Poisson Valant on 30 September. By now however, he had earned a reputation for harshness and brutality towards his men, as exemplified by the fact that no less than eighty-seven floggings were ordered between 22 October 1794 and 11 September 1795.

On 1 July 1796 Pigot ordered the thrashing of an American merchant captain, William Jessup, who he had blamed for running his ship aboard the Success when in convoy. Once they learned of the assault the American Press hit the heights of hyperbole in expressing their outrage, although the greater part of this was personally directed at Pigot, who was deemed a disgrace to the British Navy. The British envoy to the United States demanded action from the Foreign Secretary, Lord Grenville, in turn the King was consulted, and a Court of Enquiry was ordered to examine the case against Pigot aboard his command at Jamaica. Fortunately for him, this court was presided over by the tactless and self-serving Commodore John Thomas Duckworth, and on 19 January 1797 it reported greatly to his favour. With skilful management the affair was then covered up by the benign commander-in-chief, Vice-Admiral Parker.

Upon the Success being ordered home, Pigot exchanged into the frigate Hermione 32 during February 1797, after her similarly tyrannical commander, the brutish Captain Philip Wilkinson, had expressed a wish to return to England. Taking many of his toadies from the Success with him, Pigot commanded a small frigate squadron in a raid against a privateer base on Jean Rabel, Saint-Domingue, with his dispatch from Cape Nicolas dated 22 April detailing how his boats had brought out nine vessels that had previously been made prize by the French privateers.

Meanwhile, he continued to flog his men relentlessly, choosing to do so over the capstan rather than at the gangway, and in doing so he caused the death of two men, one of who took eighteen weeks to expire. Matters came to a head on 21 September 1797, when upon threatening to flog the last man down from above, two men plunged to their deaths. Displaying unbelievable contempt and insensitivity, Pigot compounded this barbarity by ordering that the bodies of ‘the lubbers’ be unceremoniously heaved over the side. This incident led on 22 September to a mutiny by the mainly foreign and Irish crew, who after killing nearly all the officers handed the ship over to the Spanish. Pigot himself met his death when he was stabbed and hacked prior to being thrown alive into the sea.

Although his precipitate promotions were due solely to ‘interest’, Pigot was a skilful enough officer and no less an advocate than the Earl of St. Vincent regarded him as promising, whilst Admiral Sir Hyde Parker thought highly of him. Nevertheless, he was so racked with self-doubt and desperation to assert himself, and he could not control his temper, although this was apparently a trait that he regretted. It was not just his men who suffered, for he also showed little courtesy to his subordinates, nor gave them the credit they were due. By the time of the mutiny and his murder in 1797 he was almost certainly in the grip of insanity.