During 1793 Commodore John Ford, the commander-in-chief of the Jamaican station, had assisted French Royalist forces in capturing the town of Jérémie and the excellent harbour of St. Nicholas Mole on Saint-Domingue, the French half of the island of San Domingo. In 1794, in coordination with the Army, he determined to make further attacks against the Republicans on the island, whilst Britain’s Spanish allies also began to make inroads into French territory from their half of the island.

On 2 January, Ford despatched Captain Bartholomew Rowley of the Penelope 32 to offer terms to the Republicans in the capital, Port-au-Prince, and when these were rejected he ordered a blockade of the coast. A month later British forces took Cape Tiburon on the western extremity of the French territory without too much difficulty, and on 11 April they added Aoul to their conquests. The main objective however remained Port-au-Prince, which town lay to the east of the bay of that name, and which was the base of the two Republican commissioners, Etienne Polveral and Léger-Félicité Santhonax. Using St. Nicholas Mole as a base, and despite sickness that was not only rife amongst the troops but had also afflicted Ford himself, the Army and Navy began gathering an expeditionary force to attack it. 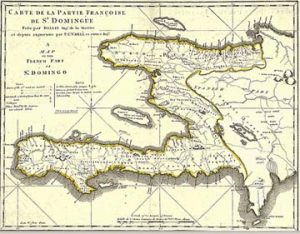 On 25 May the British forces made a rendezvous in the Arcahaye Road on the northern shore of Port-au-Prince Bay, where the small craft necessary for the landing of the troops were prepared, and where plans to co-ordinate with the French forces opposed to the Republicans on the island were agreed. Ford, who was unaware that he had been promoted rear-admiral in line with seniority on 12 April, had under his command a squadron consisting of one 74-gun sail of the line, two 64’s, a 50, three frigates, and three sloops, in addition to a dozen transports carrying one thousand, four hundred and sixty-five troops under the command of Brigadier-General John Whyte. This British force was supported by a thousand French royalists who would advance from Léogane and twelve hundred from l’Arcahaye. Opposed to them in Port-au-Prince were anything from eight to twelve hundred mulattos.

At noon on 30 May, Ford sailed from the Arcahaye Road having split his force in two. In addition to his flagship Europa 64, Captain George Gregory, he took the Irresistible 74, Captain John Henry, Belliqueux 64, Captain James Brine, Sceptre 64, Captain James Richard Dacres, and sloop Fly, Commander Thomas Affleck, with a number of troops to the south side of Port-au-Prince Bay, whilst Captain John Hills with the Hermione 32, Iphigenia 32, Captain Francis Farrington Gardner, whose previous captain, Patrick Sinclair, had died on 5 May, Swan 14, Commander Hugh Pigot, and schooner Marie Antoinette, were sent with the majority of the troops and transports to anchor that evening off Port Saline to the north. Next morning a flag of truce was despatched ashore to negotiate the surrender of the French forces in Port-au-Prince, but this was forbidden to land by the Republican commissioners.

Having decided to undertake an attack on the key defence, Fort Bizoton, which was three miles to the south-west of Port-au-Prince, the Belliqueux, Sceptre and Penelope moved into Port Sallé Bay with the sea breeze on the morning of 1 June, and whilst the former two vessels commenced firing on the fort, the latter opened fire on a ravine flanking the works. These three ships were aided occasionally by the Irresistible and Europa, which were obliged to keep underway offshore. A four-hour bombardment followed that did much to weaken the resolve of the Republicans and allow a landing of three hundred troops under the superintendence of Commander Affleck. By 5 p.m. the troops were all ashore, although during this disembarkation the Irresistible and Europa were obliged to keep up a heavy fire on a cavalry troop which was threatening to dispute the process. Although the British troops were then reinforced by five hundred of the royalists from Léogane, their advance on the fort was halted and all action ceased at 6 p.m. when a violent thunderstorm set in with lashing rain. Once this had cleared, sixty British troops were able to rush the fort through a breach and carry it by bayonet at 8.30.

With the Republicans on the retreat, the frigates Hermione and Iphigenia moved in to attack a defensive position at Bernadon in the early hours of 3 June. This was in effect little more than a diversionary action to allow for a rendezvous between a troop detachment landed the previous evening and the French Royalists, which combined force would prepare the ground for the landing of the main body of troops under Brigadier-General Whyte. By now however Port-au-Prince was in turmoil, the Republicans and mulattos were streaming out, and any royalist sympathisers were desperately seeking shelter on the ships in the harbour to avoid what they believed would be the breakdown of civil order.

On the following day, 4 June, and with more and more French positions surrendering, the British men-of-war sailed into the waters before Port-au-Prince and began disembarking the remaining troops on the waterfront. With their defeat inevitable, the French struck their colours and possession was taken of sixteen richly laden merchantmen in the harbour. Regrettably, the two French commissioners escaped to fight another day, but other Republicans were not so lucky, and only the intervention of Brigadier-General Whyte prevented a wholesale massacre of their countrymen by the Royalist forces after several unfortunates had been summarily put to death.

The sloop Fly, to which Richard Hussey Moubray was promoted commander on 9 June in succession to the promoted Captain Affleck, carried Captain Rowley home with Rear-Admiral Ford’s despatches conveying news of the British success, and the latter officer arrived at the Admiralty on the evening of 15 July. The next morning Lieutenant-Colonel John Whitelocke delivered Brigadier-General Whyte’s dispatches to the Secretary of State for War, the Rt. Hon. Henry Dundas, whereupon the Park and Tower guns were fired in celebration of the British victory.

During the brief campaign, the Hermione lost five men killed and six wounded, whilst the only other ship to sustain any casualties was the Belliqueux, which suffered ten men wounded. Port-au-Prince did not long remain in British possession, for with the black slave army under Toussaint l’Ouverture supporting the Republicans, and with the sickly British garrison boasting a meagre defence of just three 18-pounders and an armed transport, the King George, it was unable to prevent an attack by French forces from Aux Cayes on Christmas Day, and with the transport being sunk what was left of the British garrison retired to Cape Donna Maria.