1748-1828. He was born at Deptford, Kent, the son of Isaac Inglefield, a naval carpenter from a Lancastrian family, and of his wife, Hannah Slade, the sister of the eminent shipbuilder, Sir Thomas Slade.

Inglefield entered the service in 1759 with the influence of his uncle, and seven years later was rated able seaman aboard the Launceston 44, Captain John Gell, which vessel carried the flag of Vice-Admiral Philip Durrell out to North America in June 1766. In May 1768 he joined the Romney 50, Captain John Corner, which ship flew the broad pennant of Commodore Samuel Hood on the same station, and he was commissioned lieutenant on 26 May. He rejoined the Launceston in October, but then returned to the Romney in the following July. In 1770 he left this ship with Hood, although he continued to serve under that excellent officer s patronage in the home guardships Marlborough 74 from 1774-6, and thereafter the Courageux 74. 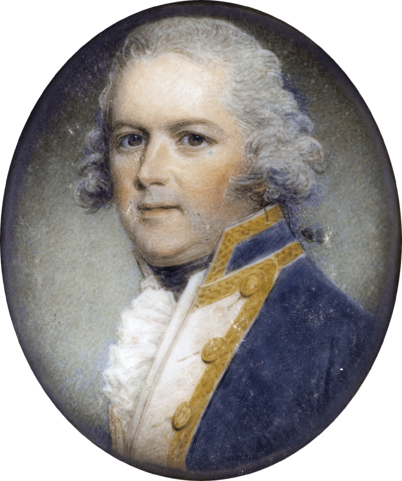 Inglefield fought at the Battle of Ushant on 27 July 1778 under Captain Alexander Hood of the Robust 74. He was promoted commander of the brig Lively 14 on 7 June 1779, a new vessel that he commissioned, and he assisted the Swallow 14, Commander Richard Hussey Bickerton, in the capture of the Duc de Chartres 12 and the rebel privateer Black Prince that year before commanding her in the Downs during 1780.

On 7 October 1780 he was posted captain of the Barfleur 98 as flag-captain to Rear-Admiral Sir Samuel Hood, and after going out to the Leeward Islands in November he was charged with supervising the sale of the captured stores from Admiral Sir George Rodney s profiteering expedition which took the Dutch island of St. Eustatius on 3 February 1781, being thus absent from the Barfleur at the Battle of Fort Royal, Martinique, on 29 April.

In August 1781 Inglefield was appointed to the ex-French Centaur 74, which he commanded at the Battles of Chesapeake Bay on 5 September, St. Kitts on 25-26 January 1782 and the Saintes on 12 April. During the latter engagement the Centaur assisted the Bedford 74, Commodore Edmund Affleck, in the capture of the C sar 74. He was then ordered to join Rear-Admiral Thomas Graves’ convoy which left Jamaica for England with the prizes from the battle, but on 16 September the Centaur was one of the many ships which found themselves on the wrong tack when overtaken by the Central Atlantic Hurricane. She was dismasted and forced on to her beam-ends without a rudder, and when she suddenly foundered on the 23rd only Inglefield, his sailing-master, a midshipman and nine men were able to escape in the pinnace. By the time they reached the Azores sixteen days later one of the men in the boat had died. Inglefield was later criticised for not remaining with his sinking ship, but in a narrative published after his acquittal for her loss at a court martial aboard the Warspite 74 in Portsmouth on 25 January 1783 under the presidency of Commodore William Hotham, he sought to calmly explain the circumstances of the shipwreck. In the meantime he had been able to purchase the captain s uniforms of the late Lord Robert Manners to replace all of his that had been lost in the Atlantic.

Inglefield was appointed to the guardship Scipio 64 in the Medway in April 1783, retaining her through to June 1786. In 1786 he and his wife went to court after Inglefield accused her of making advances towards their African servant, and she in turn accused him of desertion. The case was won by Mrs Inglefield but it attracted a great deal of public interest, led to their publishing conflicting pamphlet s detailing each side of the argument, and resulted in them never living together thereafter.During 1788-90 he commanded the Adventure 44 whilst flying a broad pennant off Africa, and in August 1790 he commissioned the new Medusa 50, serving on the same station from September and coming home in August 1792. He was a member of the court-martial that sat that year on the Bounty mutineers following their removal of Captain William Bligh on 28 April 1789.

In December 1792 he recommissioned the frigate Aigle 40 which had been upgraded to an eighteen-pounder, and after sailing for the Mediterranean he was present at the occupation of Toulon from August. During the spring of 1794 he assumed the role of captain of the fleet to Vice-Admiral Lord Hood in the Mediterranean in succession to Rear-Admiral Sir Hyde Parker, and he returned home with the commander-in-chief towards the end of the year.

He married Ann Smith of Greenwich at Baughurst, Hampshire, on 27 December 1773, by whom he had three daughters and a son. One of their elder daughters married Captain Benjamin Hallowell, whilst the youngest daughter married Captain Henry Whitby in 1805. Their son, Samuel Hood Inglefield, died as a rear-admiral whilst commander-in-chief off China in 1848, and a grandson, Edward Augustus Inglefield, also reached the rank of admiral.

Although described as a remarkably handsome, good-natured and kind man, Inglefield suffered the Earl of St. Vincent s disapprobation, being labelled honest and sufficiently intelligent, but pompous, flowery, indolent, and wrapped up in official forms, stay-tape and buckram .