1774-1808. Born on 5 July 1774, he was the second of five sons of the Whig politician, Henry Herbert, the 1st Earl of Caernarfon, and of his wife Lady Alicia Wyndham, the daughter of the 2nd Earl Egremont. His brothers Hon. Henry Herbert, who became Lord Porchester, and Hon. William Herbert, both sat in parliament.

Herbert entered the Navy in May 1786 as a captain’s servant aboard the Salisbury 50, Captain Erasmus Gower, flying the broad pennant of Commodore John Elliot at Newfoundland, sailing for that station in June of each of the following three years until paid off in November 1788. In early 1789 he appears to have served briefly aboard the Medway guardship Scipio 64, Captain Skeffington Lutwidge, before rejoining the Salisbury 50, Captain William Domett, which went out to Newfoundland in the summer with the flag of Vice-Admiral Mark Milbanke. During the Spanish Armament in 1790 he was aboard the Valiant 74, Captain HRH the Duke of Clarence, and later Admiral Earl Howe’s flagship Queen Charlotte 100, Captain Hugh Cloberry Christian. He returned to the Salisbury to see further service under Admiral Milbanke and Captain Edward Pellew on the Newfoundland station, which vessel was paid off in December 1791. In the course of the following two years he commanded the tiny sloop Placentia at Newfoundland.

He was commissioned lieutenant on 15 April 1793 and would appear to have gone out to the Leeward Islands to serve in Vice-Admiral Sir John Jervis’ campaign which commenced in January 1794, for in May he was appointed the acting-captain of the frigate Resource 28 in succession to Captain Thomas Hamilton, a position he relinquished in July. Meanwhile, on 24 July, he was promoted commander by the Admiralty with an appointment to the Merlin 18, although he presumably did not join her as he was still in the West Indies.

Having eventually returned home, Herbert was posted captain on 6 April 1795 and appointed the regulating captain for Shropshire and Montgomeryshire. During August he succeeded Captain Lord Augustus Fitzroy in command of the frigate Amphitrite 28, and later that month he escorted a convoy to the Baltic from Hull, prior to returning from the Sound in September after being temporarily detained by news that a Dutch fleet was at sea. In December his command had to scurry for the Orkney Islands to escape rough weather, and she remained there for some time until arriving at Portsmouth towards the end of February 1796. 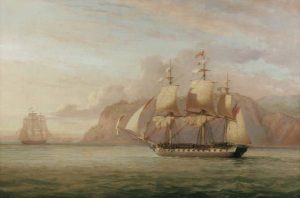 In April 1796 the Amphitrite went out to the Mediterranean, giving passage to General John de Burgh who had been appointed the governor of Corsica, and having later returned to England she escorted a convoy to Lisbon in October before entering Gibraltar with thirty sail of merchantmen on the 28th of that month. By March 1797 the Amphitrite was in Irish waters to collect a convoy from the Shannon for delivery to the Downs.

Herbert commissioned the eighteen-pounder frigate Amelia 38 in September 1797, which vessel had been captured as the French Proserpine by the Dryad 36, Captain Lord Amelius Beauclerk, on 13 June 1796, and for some time had been docked for repairs at Plymouth. She put to sea on 4 November and joined Vice-Admiral Lord Keith’s squadron off Ushant. On 16 February 1798 she arrived at Plymouth from a long cruise off France with seven men in irons who had displayed mutinous tendencies, and to prevent any possible insurrection she was anchored between two 74-gun ships. It transpired that whilst off Brest a number of men had threatened to murder the officers and carry the Amelia into the French port, and that upon being informed of the threat by a man already in irons Herbert had armed his officers and threatened to kill as many mutineers as possible at forfeit of his own life if the ringleaders were not given up. On 19 March two of the seamen were hung on board the frigate at Plymouth for leading the mutiny.

Serving thereafter in the Channel Fleet under Admiral Lord Bridport, the Amelia was present in the chase and defeat of Commodore Bompart’s squadron off the Irish coast on 12 October 1798, having earlier sailed through the French force in the dark of night. Following the action, she was sent to the Clyde to land five hundred prisoners, and on 26 November she entered Plymouth from the Irish station. She was in the same port when on 31 January 1799 the Formidable 98, Captain James Whitshed, ran on board her after breaking loose from her moorings, and after putting to sea five days later the Amelia was ordered on a cruise off Ireland towards the end of March.

On 9 April 1799, being in company with the San Fiorenzo 36, Captain Sir Harry Neale, and having been damaged in a storm, the Amelia was attacked by three French frigates off Belle Isle, but despite their advantage the French surprisingly withdrew after inflicting a great deal of damage and casualties of two men killed and seventeen wounded. The two British frigates returned to Plymouth eight days later for repairs, and the Amelia was again off Ireland in June, prior to returning to Plymouth from where she was sent out with a small squadron to investigate reports of an enemy force off Belle Isle. During August she was with the Channel Fleet in Torbay, in September she sent the French brig St. Malo 6 into Plymouth after capturing her in passage from Rochefort to Brest, and by mid- October she was back once more in the Devonshire port.

For the greater part of 1800 the Amelia continued to be employed with the Channel Fleet., and during June-August she served under the command of Commodore Sir Edward Pellew in the expedition that was sent to assist the Royalists in the Morbihan. She was later with Rear-Admiral Sir John Borlase Warren’s squadron in its unsuccessful mission against six Spanish sail of the line at Ferrol, and she was back in Plymouth by mid-October, and again in early December.

On 5 February 1801 Herbert enjoyed an amazing slice of fortune when the Amelia collided with the exceptionally swift St. Malo privateer Juste 16 in a fog off the French coast, the latter being forced to strike immediately when her foremast and bowsprit were carried away, much to the chagrin of her captain and crew who knew that under normal circumstances their vessel would have out-run anything sent against them. The Amelia entered Plymouth on 17 February, and in mid-March she departed the port on another cruise, it being reported that on the 16th she had chased the French frigate Guerrier 38 into Rochefort from Lorient. On 10 May she captured the privateer Heureux 14 off the Loire following a four hour chase, and she returned to Plymouth on 11 June after what had proved to be a most successful cruise. Two weeks later she sailed to join the Channel Fleet upon urgent orders being received from the Admiralty, and on 4 August she sent into Plymouth a Spanish packet which she had captured in passage from Havana to Ferrol.

On 23 August 1801, and apparently in full view of thousands of spectators ashore, the Amelia fought an hour-long action with the French Meduse 50, a 44-gun vessel and a schooner off Rochefort after she had sailed inshore on reconnaissance. The enemy broke off the engagement despite the fact that the Embuscade 32 was coming out to support them, and they retired to the sanctuary of the batteries. Herbert continued to parade offshore with his colours flying, but the French could not be induced to renew the action and so he sailed back out to sea to rejoin his squadron.

Throughout the autumn of 1801 more prizes were sent into port as the Amelia cruised successfully in the Bay of Biscay, with her most rewarding endeavour being the capture of a number of coasters on 19 September. In early November she was at Torbay before returning a fortnight later to Plymouth, and in January 1802 she was victualled for four months in preparation for duty in the preventative service. Some weeks later however, and with an end to hostilities in sight, Herbert incurred the wrath of the first lord of the Admiralty, the Earl of St. Vincent when, allegedly on grounds of ill-health, he departed his command. This was an act that was to have a detrimental effect on the remainder of his career.

In October 1803, some months after war with France had been renewed, he recommissioned the frigate Uranie 38 at Plymouth, and having gone around to Portsmouth at the end of February 1804 he sailed for Jamaica with a convoy of forty merchant vessels on 8 March. His command eventually arrived at Port Royal on 10 May with part of the convoy after it had been scattered in gales off Madeira. On 26 July she left for England with the homeward-bound convoy, and she reached Plymouth on 8 October.

The Uranie remained at Plymouth for some weeks in the autumn of 1804 prior to going out on a cruise on Christmas Day, and in February 1805 she sent a valuable prize, the Spanish brig Nuestra Senora Del Rosario into the Devonshire port after taking her off the Azores, her cargo including 70,000 dollars. She entered Plymouth on 16 March before, going out again a few weeks later, and on 17 April she sailed from Portsmouth with a convoy for Newfoundland, Halifax and Quebec. She was back in the Downs with the homeward-bound convoy by 9 September, having giving passage to the governor of Quebec, Sir Robert Milner, and on 18 September she entered Portsmouth, whereupon Herbert left her some weeks later.

In February 1806 he entered parliament as the M.P. for Wilton in Wiltshire, being presented to the Queen at an assembly shortly afterwards. On 12 September 1808, having been unseated from parliament in favour of his uncle the year before, and having failed to obtain another naval command, Herbert arrived at Gijon aboard the sloop Swallow, Commander Alexander Milner, with the intention of going ashore to serve as a volunteer with the army. Unfortunately his boat capsized in the surf and he drowned with his travelling companion before help could reach them from the shore. Seven seamen, Commander Milner, his companion’s son and a navy agent survived the disaster.

On 9 July 1800 at Benfield in Berkshire Herbert married Hon. Bridget Augusta Forrest Byng, the fourth daughter of the 5th Viscount Torrington, thereby becoming the brother-in-law of Captain Hon. George Byng, who later succeeded to the title Viscount Torrington. His only child, Augusta Elizabeth, married the Whig politician Sir Francis Vincent in 1824. His mansion, Watchfield House, near Shrivenham in Berkshire, together with many valuable effects, was sold at auction on 8th December 1808. His extensive wine collection was sold separately at Oxford. In 1806 he had a residence in Upper Brook Street, London.

Herbert’s father lobbied persistently and successfully for his early promotions. In his short career as an M.P. he opposed the Portland Ministry with his brothers, and he soon made his opposition to the abolition of the slave trade known, prophesising that a disaster would ensue if the slaves were emancipated. Shortly before his death he published a volume of his own poetry.