c1743-1824. He was the son of an Englishman who had migrated to Ireland and married the daughter and heiress of Sheedy Macnamara of Ballyalla, County Clare.

At the age of five Russell inherited a substantial fortune on the death of his father, but through the neglect or fraudulence of his trustees the estate was bankrupt by the time he reached the age of fourteen. As a consequence he was employed for several years in the merchant service before entering the navy in 1766 aboard the Plymouth guardship Cornwall 74, Captain Molyneux Shuldham. He saw further service on the Portsmouth guardship Arrogant 74, Captain George Mackenzie, and in succession he served as a midshipman from 1769 aboard the cutter Hunter, and a master s mate for eighteen months on the Portsmouth guardship Terrible 74, Captain Marriot Arbuthnot. 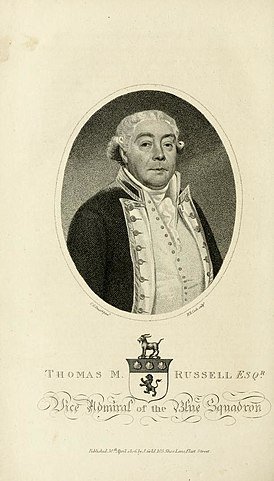 On 2 December 1772 he passed his lieutenant s examination but he was only promoted to this rank by Commodore Lord Shuldham on 2 June 1776 in North America, whereupon he joined the sloop Albany, Captain Henry Mowatt, which had recently been captured from the colonials. By early 1779 he was commanding the armed brig Diligent, and over a five week period he sent a number of captures into New York which earned him some welcome prize money.

Upon returning to England Russell became the first lieutenant of the Raleigh 32, Captain James Gambier, which vessel participated in the relief of Jersey in May 1779. Whilst the allied armada was in the Channel that summer he briefly commanded Drake s Island at Plymouth with two hundred marines and seamen, this position being termed the advanced post of Great Britain . After returning to the Raleigh he sailed for North America in December to participate in the attack on Charleston on 12 May 1780, and upon commissioning the sloop Beaumont 14, which had been captured at that port, he was promoted commander by Arbuthnot with seniority from 11 May.

On 7 May 1781 he was posted captain of the Bedford 74 for purposes of rank only, and he was then appointed to commission the prize vessel Hussar 20, in which he cruised off the North American coast and took several significant prizes. On 22 January 1783 he came upon the stricken French frigate Sibylle 32 off the Chesapeake, and despite the apparently dishonourable antics of his opponent he captured her after the arrival on the scene of the Centurion 50, Captain Samuel Clayton. Subsequently, when the Sibylle s captain, the Comte de Kergariou Locmaria, came on board the Hussar, a furious Russell broke his sword in two and confined him under close guard. The whole affair resulted in a challenge, but when Russell arrived in Paris after the war seeking satisfaction he was informed of de Kergariou s flight to the Pyrenees, and he therefore returned to London unsatisfied. In the meantime the Hussar had been paid off in June 1783 after returning to Deptford, whilst Russell had allegedly refused a knighthood as he considered himself too poor to support the title.

In December 1789 he recommissioned the aged Diana 32 which he took out to Jamaica in the following March. During 1792 he had another controversial confrontation with the French when, learning of the imprisonment of Lieutenant John Perkins in Haiti for allegedly supplying arms to the natives, he left his convoy off St. Domingo and went round to J r mie to enforce his countryman s release. After threatening to blow up a fort he was successful in his errand and Perkins was freed. The Diana was paid off later that year.

After remaining unemployed for the first two years of the French Revolutionary War Russell briefly commanded the St. Albans 64 from the summer of 1795, in which he escorted home an East India convoy from St. Helena. From January 1796 he commanded the Vengeance 74, going out to the Leeward Islands in February and being present at the reductions of St. Lucia in the campaign from April-June 1796 and Trinidad on 18 February 1797. After returning to England in the spring of 1799 the Vengeance joined the Channel fleet before she was paid off in the early autumn. He then recommissioned the Princess Royal 98, serving in the Channel during 1800 and leaving her upon being promoted rear-admiral on 1 January 1801.

In 1803 he was appointed to command the Downs station under the orders of Admiral Lord Keith who had overall command of the coast from Selsey Bill to Scotland, and for the next four years he flew his flag in numerous vessels at Yarmouth and off the Texel. These included in 1803 the St Albans 64, Captain John Temple, the Gelykheid 68, Captain Hon Francis Farrington Gardner, and the Repulse 74, Captain Hon. Arthur Kaye Legge, from 1804 the Inflexible 64, Captain Thomas Bayly, and at the end of the year the Eagle 74, Captain David Colby, and from 1805 the Monmouth 64, Captain George Hart, Namur 74, Captain Lawrence Halstead and the Majestic 74, Captain Joseph Hanwell and later Captain George Hart.

Russell was further promoted vice-admiral on 9 November 1805, and in 1807 he was appointed commander-in-chief in the North Sea where he enforced a strict blockade of the Texel. Following the Danish declaration of war he took Heligoland on 4 September 1807, his flag being in the Majestic 74, Captain George Hart. During 1807-08 he also flew his flag aboard the Amelia 38, Captain Hon. Frederick Irby. He was promoted admiral on 12 August 1812.

Admiral Russell died in his carriage at his home in Great Canford in the vicinity of Poole on 22 July 1824.

He was married in 1793 to a Miss Phillips who died on 9 March 1818 having had no issue. He did however have a daughter born in 1789, Lucinda, who may have been from a previous marriage or relationship, and who married Captain George Patey.

Russell was a prot g e of Admiral Marriot Arbuthnot. He was described as a blunt old sailor and worthy man . During his service he made a good deal of prize money, but as with many seamen this was lost ashore by investing with the wrong people.