By February 1792 the island of Saint-Domingue, the modern-day Haiti, had been engaged in a very turbulent and bitter civil war for the best part of a year, brought about by the French colonists’ attempts to ensure that ‘Liberty, Equality and Fraternity’ did not apply to the black slaves upon the island who had taken advantage of the French Revolution to cast off their chains, but whom the colonists wished to deprive of their rights to farm their own smallholdings.

The war was singular for the barbarities perpetuated by both factions, including the sawing of prisoners in half and decapitations. On one occasion Commander William Nowell of the sloop Ferret 12, who had been tasked with delivering emergency supplies from Jamaica to Saint-Domingue, had witnessed a mulatto chief being roasted alive. When three hundred survivors of a group of some five hundred blacks had been marooned on an islet and rescued by the British, they had been handed back to the French at Cap François by Rear-Admiral Philip Affleck with many declarations of appreciation for his humanity, only for the commander-in-chief at Jamaica to later discover that the entire group had been slain in cold blood. The ex-slaves were no less vicious, and amongst their trophies of war was a group of eighty French ladies kept for their pleasure at Fort Louis. 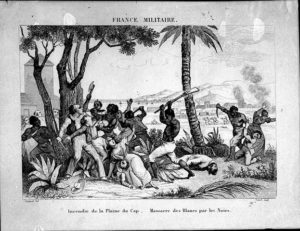 One collateral victim of the disorder was the enigmatic Lieutenant John Perkins of the Royal Navy, a mixed-race officer of about forty years of age from Kingston, Jamaica who was believed to be the son of a black slave mother and thus would originally have been deemed a slave himself. It appears that Perkins had often been engaged in unconventional employment by the Navy, which was possibly why he found himself imprisoned and under sentence of death at the French colonial port of Jérémie for allegedly supplying arms to the black rebels. Whether his imprisonment was the result of a failed clandestine mission, or, as claimed by the British, simply a punishment for the success that his schooner Punch had enjoyed against the trade of that town during the War of the American Revolution, hinged on which side one wished to believe.

Upon visiting Saint-Domingue for the purpose of bringing further supplies to the beleaguered French, Captain Thomas Macnamara Russell of the Diana 28 was treated to a public dinner on 17 February by the grateful Colonial Assembly at Aux Cayes. During this feast he raised the issue of Perkins’ imprisonment at Jérémie, and the fact that the British lieutenant was facing execution without having even been given the benefit of a trial. An agreeable response was received from the colonial authority, and that evening Russell returned to his ship under the strong impression that he had obtained all but the written guarantees that would see Perkins released.

An indication that things were perhaps not what they seemed occurred later that night as Captain Russell was about to take to his cot aboard the Diana off Aux Cayes. A short letter was brought aboard from M. Billard, the president of the Colonial Council, stating that Russell and his marines would be most welcome to join an expeditionary force that was about to sortie out against the rebels. Such a proposal was contrary to the laws of nations, for if Russell had agreed it would have meant taking up arms against people who were after all French citizens, ‘whatever their description’, as he delicately phrased it in a letter of response. Russell was therefore little surprised to find on the next day that the officer sent to collect the written order for Lieutenant Perkins’ release, Midshipman Philippe Pipon, returned without it, stating that he had been met with a great degree of prevarication by the French. A further application to the council for the order on the day after that was met with a more provocative response to the effect that ‘as it was a promise made after dinner, it was not regarded as binding’.

Satisfying himself that the guarantees of Perkins’ release had been reneged upon, Russell decided to take matters into his own hands, and it was to his immense good fortune that the very man to enforce his wishes appeared off Aux Cayes in the shape of Commander Nowell of the Ferret, a most impressive officer of prodigious strength, athleticism, bravery and character. He too had been applying for Perkins’ release, in his case directly to the authorities at Jérémie at the behest of Admiral Affleck and the civil authority at Jamaica, but without success.

With Russell declaring that he would sacrifice as many Frenchmen as there were hairs on Perkins’ head should he be harmed, the Diana and Ferret set off for Jérémie without further hesitation, and arriving off that port the two men-of-war lay to with the men at the guns and the decks cleared for action. Nowell then went ashore with Lieutenant Paul Godby and a letter from Russell demanding Perkins’ release in compliance with M. Billard’s original instructions, the written order for which, Russell stated, he had unfortunately not received by the time that he had sailed from Aux Cayes. In the event that the Jérémie authorities did not feel that his letter was sufficient justification for Perkins’ release, Captain Russell made it perfectly clear that he had the power to enforce it anyway.

Once ashore, Nowell was met by a hostile armed mob of almost three hundred French colonials, but at least the president of their council appeared ready to compromise, for he soon asked what would happen to the town if Perkins was not delivered up. To this Nowell, hand on sword, simply responded that the release should be made, and that half of the allotted hour Russell had allowed him to have Perkins handed over had already passed. A siren voice then announced that Nowell could have Perkins, ‘but it shall be in quarters’. Enraged and as imposing as ever, Nowell drew his sword and cried ‘Sir, order that fellow out of my sight or he dies!’ Sure enough, cowed by Nowell’s resolution and the threat of the men-of-war off the town the French immediately released Perkins from his imprisonment, although whether this was from a brig in the harbour, or from a dungeon at which door had been placed the rack on which the lieutenant was to be tortured, was again a moot point dependent on which history the later reader wished to believe.

Perkins would later rise to the rank of post- captain, the first officer of colour to achieve that step, although it is of interest that he never visited the country to which he dedicated his life of service, but rather spent his entire naval career in the Caribbean where his skills and local knowledge would come to be highly valued by successive commander-in-chiefs.