1774-1848. He was born on 7 June 1774 at Glenluce, Wigtownshire, to a Scottish family which worked a large farm owned by the Earl of Galloway. His father, John M’Kerlie, was a stonemason.

After early service on a Baltic trader that made at least one voyage across the Atlantic, M’Kerlie had the immense good fortune to enter the Navy aboard the Arethusa 38, Captain Sir Edward Pellew, in April 1794 as an able seaman, serving in the frigate squadron off Ushant commanded by Rear-Admiral John MacBride. In February 1795 he moved with Pellew to the Indefatigable 44, which vessel spent the remainder of the year cruising to the confusion of the enemy off Ushant. He was present on 26 January 1796 at Plymouth when a troop-carrying East Indiaman, the Dutton, went ashore in rough weather under the citadel and Pellew led the rescue of most of her passengers and crew. He was also a witness to the captures of the French frigate Unite 38 on 12 April, and the Virginie 40 eight days later, and he was present in December when the Indefatigable harassed the French expedition to Bantry Bay whilst it was leaving Brest by opening fire, letting off false signals, and burning lights, causing the leaders of the expedition to lose contact with the rest of the fleet, and forcing the Séduisant 74, a ship of the line, to drive aground. Unfortunately, M’Kerlie was to lose his right arm and receive a wound to the thigh when in company with the Amazon 36, Captain Robert Carthew Reynolds, the Indefatigable drove the Droits de l’Homme 74 ashore during a winter gale in Audierne Bay on 13 January 1797.

Removing with Captain Pellew in March 1799 to the Impétueux 74 in the Channel Fleet, M’Kerlie was a witness to an attempted mutiny in Bantry Bay on 30 May, which his captain prevented with the assistance of the ship’s marines. The Impétueux then joined Rear-Admiral Sir Charles Cotton’s squadron reinforcing Vice-Admiral Lord Keith in the Mediterranean during the chase of the Brest fleet which had broken out on 25 April. Thereafter, she returned to the Channel, serving in succession under Admirals Keith, Bridport, and St Vincent, and in June 1800 M’Kerlie was present in the expedition to Quiberon Bay, where he assisted Lieutenant John Pilford to board and destroy the corvette Insolente 18.

At the end of June 1800, he was appointed an acting lieutenant of the Thames 32, Captain William Lukin, and he was commissioned into that rank on 18 August. He was employed thereafter aboard the fireship Megaera 8, Captains Henry Hill, and John Newhouse, and later served under the former officer during the peace aboard the Camilla 24 at Newfoundland.

Upon Pellew’s recommendation, in March 1804 M’Kerlie was appointed the first lieutenant of the Spartiate 74, Captain Sir Francis Laforey, in which role he fought at the Battle of Trafalgar on 21 October 1805. Having been promoted commander on 24 December, he remained on the beach for two and a half years, although at the Admiralty’s behest he did work with the famous engineer, Thomas Telford, in establishing communications between northern England and Northern Ireland, in addition to undertaking surveying roles with regard to ports on both coasts, as well as roads and bridges. 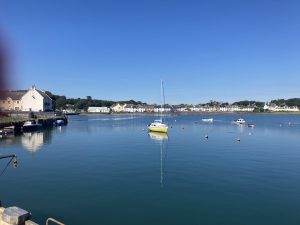 The port of Garlieston, from where M’Kerlie ran his own merchant vessel after the wars.

From June 1808 he commanded the sloop Diligence 16 for two months, fitting her out for Gibraltar at Woolwich, and he then commissioned the newly launched sloop Calliope 10 at Deptford, which made its way down to Sheerness on 19 September. In early October his command put out from the Downs for a cruise off Calais, and she saw further employment off Flushing, Boulogne, and Ostend.

The Calliope served in the Walcheren Expedition from 28 July 1809, with M’Kerlie earning the approbation of Rear-Admiral Sir Richard Strachan for his work with gunboats on the Scheldt River, and as a reward he was given a cruise off Holland. On 25 October 1810, his command captured the Dunkirk privateer Comtesse d’Hambourg 14 after a short chase and ninety-minute action near the Doggersbank, in which she suffered three men wounded and had to return to Yarmouth with her prize to effect repairs. Remaining for the next few years on the North Sea station, in March 1813 M’Kerlie’s sloop drove a French privateer lugger ashore to destruction in the Vlie Passage during a gale in an engagement that was reminiscent of the one that saw him lose his right arm thirteen years earlier.

Next, based at Heligoland, M’Kerlie was given the command of vessels in the North German rivers. When French forces invaded Cuxhaven in May he subjected them to a two-hour bombardment, having previously taken the precaution of destroying the shore batteries. He was superseded by Captain Arthur Farquhar in October, but at the end of the month commanded a raid into the Weser that saw two corvettes and two gun-brigs captured. He then returned with the Calliope and her prizes to England in December to learn that he had been posted captain with seniority from 4 December 1813, whereupon he was obliged to leave the sloop. On 4 April 1816 he was granted a pension for the loss of his arm.

There followed many years of unemployment, during which period he captained his own merchant ship, the Garlies, operating out of the little port of Garlieston, and also served as a magistrate in Wigtownshire. M’Kerlie returned to duty when he commissioned the new frigate President 52 at Portsmouth on 17 February 1834, sailing for Halifax on 29 May with Major-General Sir Colin Campbell, the governor-general of Nova Scotia, before voyaging on to Bermuda and delivering that vessel to the commander-in-chief of the North America and West Indies station, Vice-Admiral Sir George Cockburn. Here he transferred to the experimental Vernon 50, which he brought home to Portsmouth on 9 August after a seventeen-day passage. Going around to Sheerness, the Vernon was paid off to be immediately recommissioned for service on the Mediterranean station.

On 12 December 1834 the Vernon passed Portsmouth on her voyage out to the Mediterranean. Based at Malta, M’Kerlie’s command delivered the commissioners for overseeing the affairs of that island to Marseilles in November 1836, but although he initially confirmed his satisfaction with the Vernon, she was ordered home in early 1837, being so seriously affected by dry rot that she was considered barely seaworthy. Sailing initially for Barcelona on 28 January to unload her stores and provisions to the Rodney 92, Captain Hyde Parker, she visited Gibraltar and Tangiers before being detained in the Gut of Gibraltar by adverse winds for over a week. When she did arrive at Portsmouth on 11 March, the Vernon did not drop anchor but instead proceeded for Chatham where she was paid off on 25 March.

M’Kerlie did not see any further active service, but he became a rear-admiral on 1 October 1846 in accordance with seniority, and he died on 12 September 1848 at his residence of Caroisal in Wigtownshire. He was buried at Kirkmandrine Church, Sandhead.

He married Harriet Stewart of Cairnsmure and Burness, by whom he had issue one daughter, born on 7 August 1821.

As a youngster, M’Kerlie refused to let his disability affect what he perceived to be his deserved involvement in every escapade, on one occasion being told by Pellew that he should stay aboard with the first lieutenant rather than risk losing his other hand and having nothing to ‘wipe his backside’ with.