Dacres entered the Navy in February 1762 aboard the Active 28, Captain Herbert Sawyer, almost immediately enjoying a share in the capture of one of the richest prizes ever taken, the Spanish register ship Hermione. Further employment came in the Channel in the latter part of the Seven Years War aboard the Aeolus 32, Captain William Hotham, the Thames 32, Captain John Elliott, and then Jersey 60, Captain William Dickson, flying the broad pennant of Commodore Richard Spry in the Mediterranean in the late 1760 s. The latter officer promoted him lieutenant of the Montreal 32, Captain Phillips Cosby, on 17 March 1769, and he remained on that station for a short while. 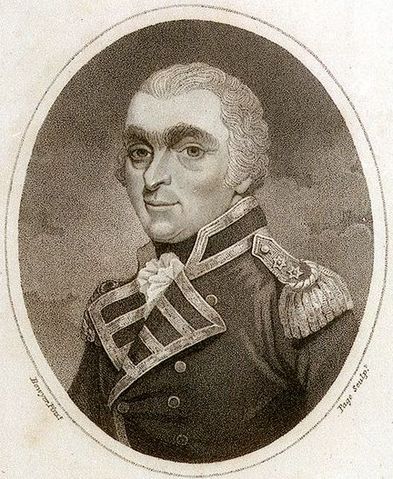 In 1776 he was second lieutenant of the Blonde 32, Captain Philemon Pownall, going out to Quebec with a convoy, and he was selected by Commodore Sir Charles Douglas to join the naval force under the less than inspiring Captain Thomas Pringle on the strategically important Lake Champlain. When commanding the schooner Carleton 12 in the Battle of Lake Champlain on 11-12 October 1776, Dacres was knocked unconscious after his vessel came under heavy attack from the Americans, thereby allowing a midshipman, Edward Pellew the future Lord Exmouth, the opportunity to take command and demonstrate his immense abilities. Dacres was nevertheless cited by three lieutenants including John Schanck in an unprecedented letter to the commander of the British forces, Captain Thomas Pringle, for being given undue praise for his efforts in the battle. The fact that he had been singled out for praise resulted in him being sent home with despatches, and after reaching the Admiralty on 23 November he was promoted commander two days later and presented to the King by the first lord of the Admiralty, Lord Sandwich.

Appointed immediately to the new sloop Sylph 18, he went out to the Leeward Islands in February 1777 and escorted home a convoy in company with the Hind 28, Captain Henry Bryne. In September he was appointed to the Ceres 18, going out to the Leeward Islands once more, in which, with the Ariadne 24, Captain Pringle, he captured the American rebel Alfred, 20 Captain Elisha Hinman, in the West Indies on 9 March 1778. In the same action the American Raleigh 32 fled. The Ceres was engaged in convoy duty later in the year and also took the privateer Tigre on 18 October, but on 17 December, after a two day pursuit and following the Battle of St. Lucia on 15 December she was captured off that island by the French Iphig nie 32, Captain Count de Kersaint, although her convoy was thus enabled to escape. Dacres was shown great courtesy by the French, and with Lieutenant Sir Charles Henry Knowles was returned by their commander-in-chief, the Comte d Estaing, to resume his career prior to being officially exchanged.

Having returned to England Dacres was posted captain of the Perseus 20 on 13 September 1780 which was fitting out at Chatham, and whilst serving in the Downs for the next couple of years he assisted at the capture of the privateer Comte de Vaux on 1 December off Beachy Head, the Dutch Indiaman Catherine Wilhelmina on 7 January 1781, also off Beachy Head, and the privateer Deane on 30 October. In November the Perseus took a convoy up to Leith, and in August 1782 sailed for Elsinore to collect a convoy which Dacres retained until he could be assured of additional protection from the Dutch fleet, which was then expected to be at sea. Having been paid off shortly afterwards he commanded the Orpheus 32 through the winter of 1782-3 and later the Aurora 28 before she was paid off in May 1783.

After almost ten years of unemployment he commissioned the Sceptre 64 which was fitting out at Portsmouth in February 1793 following the commencement of the war with France, serving in the Channel and participating in the fleet cruise during July-August. He thereafter sailed for the Jamaican station in November where he was present with the Sceptre in Commodore John Ford s attack that saw the surrender of Port au Prince, San Domingo, on 4 June 1794. With his crew suffering greatly from sickness Dacres returned to England with a convoy of thirty vessels and in company with the Irresistible 74, Captain John Henry, reaching Falmouth in October. In early November he was appointed to the Alfred 74 in the Channel fleet, which he retained for a short while

In March 1795 he joined the Barfleur 98 in which he was present at the Battle of Groix on 23 June 1795, although his ship was barely engaged and did not suffer any casualties. This vessel returned to Portsmouth in early August to be fitted out as the flagship to Vice-Admiral Hon. William Waldegrave, going out to the Mediterranean in December and being part of the force sent to recover the frigate Nemesis 28 which had been carried by the French into neutral Tunis. Still with Waldegrave s flag, Dacres fought at the Battle of St. Vincent on 14 February 1797, incurring casualties of seven men wounded. He was later in the Channel and off Cadiz during 1798 before exchanging with Captain John Elphinstone in to the Foudroyant 80 for a brief period at the beginning of 1799, Vice-Admiral Lord Keith having desired the Barfleur as his flagship and Elphinstone as his flag-captain.

Captain Dacres fought at the Battle of St. Vincent in 1797

Dacres was advanced to the rank of rear-admiral on 14 February 1799 and left the Foudroyant shortly afterwards. In May 1801 he raised his flag aboard the Nimrod 18, Commander John Browning Edwards, at Plymouth as the second-in-command at that port, this vessel being paid off in October. By the spring of 1802 his flag was aboard the Centaur 74, Captain Bendall Littlehales, and during the peace he held the chief command of that station with the Centaur becoming a guardship at Torbay later that year.

As war loomed in the spring of 1803 he removed his flag from the Culloden 74, Captain Charles Henry Lane, to the sloop Spitfire 18, Commander Robert Keen, and in June he found himself as third-in-command at Plymouth with Admiral Sir John Colpoys and Vice-Admiral Sir Charles Cotton becoming his superiors, at which time he was flying his flag aboard the Spencer 74, Captain Hon. Robert Stopford. By the autumn he was aboard the Foudroyant 80, Captain Peter Spicer, removing briefly to the Prince 98, Captain Richard Grindall, on 29 October whilst remaining at Plymouth.

On 10 November 1803 he transferred to the Courageux 74, Captain Thomas Bertie, and was summoned to Portsmouth where he remained wind-bound for several weeks before on 2 January 1804 he set sail for the Jamaican station from St. Helens to take up the position of deputy commander-in-chief designate to Rear-Admiral Sir John Duckworth. After running into bad weather he was forced to put into Plymouth on 1 February with thirty of the one hundred and fifty ship convoy he had previously departed with, and he was obliged to shift his flag two weeks later into the Franchise 36, Captain Hon. John Murray, in order to proceed to the West Indies. After eventually reaching Jamaica in June he moved his flag to the Theseus 74, Captain Edward Hawker, and succeeded Duckworth as commander-in-chief in January 1805. During the Trafalgar campaign his station was reinforced by four sail of the line despatched from his counterpart in the Leeward Islands, Rear-Admiral Hon. Alexander Cochrane. After his flagship was badly damaged in a hurricane in September 1805, losing all her masts and boats, and with her officers serving at the pumps to help keep her afloat, he removed into the Hercule 74, commanded by his son, Captain Barrington Dacres.

Promoted vice-admiral on 9 November 1805, towards the end of the year Dacres had to be alert to the departure from France of the flying squadrons under the command of Vice-Admiral Leiss gues and Rear-Admiral Willaumez, during which time he briefly flew his flag aboard the receiving ship Shark 18, Acting-Commander Peter Douglas. In 1806 he flew his flag aboard the Veteran 64, Captain Andrew Evans, and he despatched the small force of frigates under Captain Charles Brisbane which captured Cura oa on 1 January 1807. He eventually returned to Portsmouth in August 1808 aboard the Veteran, somewhat debilitated by the years spent in the tropical climate, and shortly afterwards he was presented to the King.

Admiral Dacres died in Stanhope Street, London, on 6 January 1810 after failing to recover from a fall from a horse.

He married Eleanor Pearce of Cambridge at Totnes on 1 August 1777, and had two children, Captain Barrington Dacres and Vice-Admiral James Richard Dacres, who served as his flag-lieutenant for some time at Jamaica.

Dacres was a round-faced man with a small mouth and heavy dark eyebrows. He was as guilty as any in being prepared to advance his relatives or followers at the expense of more worthy officers, as illustrated in the notorious case of Lieutenant Michael Fitton, who Dacres not only failed to promote for his capture of the celebrated privateer Superbe 14 in October 1806, but also replaced in command of his vessel, the Pitt 12, with one of his favourites. He did very well out of prize-money, having got off to a good start with his share of the Hermione, and an excellent finish with his lucrative command in Jamaica. Otherwise he was well regarded, kept a happy ship, and was described as kind-hearted and worthy , with Betsey Fremantle considering him to be domestic-minded .