1726-1799. He was born of Scottish descent on 2 May 1726, the youngest son of Gilbert Affleck from Dalham Hall, Suffolk, and of his wife, Anne Dolben. He was the brother of Rear-Admiral Sir Edmund Affleck.

Affleck served with the East India Company before earning a lieutenant’s commission in the navy on 28 May 1755. Three years later, serving aboard the fireship Aetna, Commander George Balfour, he distinguished himself at the capture of Louisbourg, and in particular during the boat attack by six hundred men on two French ships of the line, the Prudent and Bienfaisant. As a result he was promoted to the command of the sloop Gramont 16, a captured French privateer, with his rank effective from 1 August 1758. He took troops out to Gibraltar in July of the following year, was present at the Battle of Lagos on 18 August 1759, and was posted captain by Admiral Hon. Edward Boscawen two days later, being appointed for purposes of rank only to the flagship Namur 90. 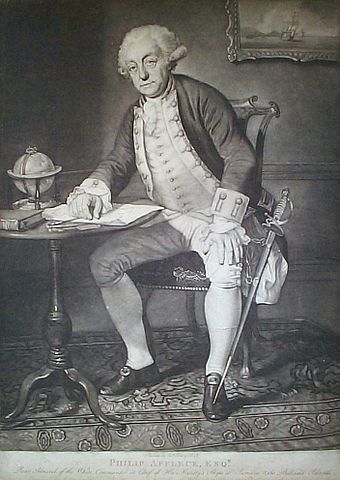 Returning to England, Affleck assumed command of the Panther 60 in which he was employed on the Indian station after going out in January 1760, this vessel being dismasted in the hurricane that devastated Pondicherry on New Year s Day 1761. Remaining in the East Indies, he exchanged with Commander William Newsome into the storeship Southsea Castle 44 during May.

In 1762 he commissioned the recently captured French Indiaman Baleine 32, and he enjoyed dining the French governor on the island of Diego Rays when this official was unaware of the vessel s change of hands. The same advantage over the enemy allowed him to obtain intelligence at Mauritius prior to the planned invasion of that island, although in the event the enterprise was cancelled. He retained the Baleine through to 1764 when he joined the Argo 28, in which he undertook a visit to China, arriving at Macao at the end of March 1765 before returning with her to England later that year.

Affleck saw no further service until October 1778 when he commissioned the Triumph 74 for the Channel fleet, being present during the strategic August 1779 retreat, following which the vessel was copper-bottomed in December. Having subsequently gone out to the Leeward Islands in the ensuing spring he served under Admiral Sir George Rodney in the latter part of the action with the French fleet from 15 to 21 May 1780, losing four men killed and fourteen wounded. He remained with the fleet during the voyage to New York where it arrived on 14 September, and after returning to the Leeward Islands with the fleet at the end of the year he participated in the capture of St. Eustatius on 3 February 1781. Following the death of Captain Walter Young on 2 May he became first captain or captain of the fleet to Rodney aboard the flagship Sandwich 90, and he returned to England in August with the commander-in-chief aboard the Gibraltar 80, Captain John Symons. Thereafter he did not enjoy any further employment during the American War of Revolution.

Affleck recommissioned the Triumph as a guardship at Portsmouth in April 1783, retaining her for up to a year before being replaced by his nephew, Captain William Affleck. On 24 September 1787 he was advanced to flag rank, and sailing out on 20 May 1789 he was the commander-in-chief at Jamaica with his flag aboard the Centurion 50, Captain William Albany Otway, returning home in August 1792.

Affleck was promoted vice-admiral on 1 February 1793, and briefly flew his flag aboard the Boyne 98, Captain Otway, in the Channel at the commencement of the French Revolutionary War. He then retired ashore to serve as a lord of the Admiralty from April 1793, being an active first naval lord to the laid-back and more political first lord, the Earl of Chatham. When Chatham left office at the end of 1794 Affleck was soon replaced as first naval lord by the new first lord, Earl Spencer, and he left the board entirely in March 1795. In accordance with his seniority he was advanced to the rank of admiral on 1 June 1795.

Affleck died unmarried at Bath on 22 December 1799. His tomb is in All Saints Churchyard, Bath Weston.

He was a friend of Warren Hastings, having served with him in the East India Company. During his time at the Admiralty Affleck was a more than active first naval lord due to Lord Chatham s strong adherence to the art of delegation. He was described as an amiable, excellent clear-thinking man who rejoiced in the nickname of Uncle Phil , and he was a patron of William Albany Otway who was his long-term first lieutenant aboard the Triumph and later his flag-captain.