1723-96. He was born at Kirk Deighton in the West Riding of Yorkshire on 26 February 1723, the only son of Hugh Palliser, a humble and obscure landowner and captain in the army who died whilst Palliser was still a boy, and of his wife, Mary Robinson. He was the uncle of Captain George Robinson Walters.

In 1735 Palliser entered aboard the Aldborough 20, commanded by his uncle, Nicholas Robinson, removing to the Kennington 20 with this officer two years later, where he remained until 1740. He subsequently served aboard the store ship Deptford and the Tiger 50, Captain John Forbes, and on 12 May 1741 he passed for lieutenant aboard the Essex 70 commanded by his uncle, being promoted to this rank on 18 September. He was first lieutenant to Captain Richard Norris at the Battle of Toulon on 11 February 1744, and following the action, along with his fellow lieutenants, he levied charges of cowardice and misconduct against his captain which resulted in Norris s flight from arrest at Gibraltar.

On 3 July 1746 Palliser was promoted commander of the sloop Weazel 16, in which he quickly scooped up a number of French privateers including the Icantie from Boulogne and the Fortune from Honfleur off the Isle of Wight on 8 October. On 25 November he was posted to the Captain 70 bearing the broad pennant of Commodore Hon. Edward Legge in the Leeward Islands, although this was but a brief command as Legge died in September 1747. He afterwards served in the Sutherland 50 before being invalided home to England in March 1748 after receiving a severe wound when an arms chest exploded.

In December 1748, having recovered, he took the frigate Sheerness 20 out to the East Indies, returning to England in April 1750 when she was paid off. January 1753 saw him appointed to the guardship Yarmouth 64 at Chatham, and quickly thereafter to the frigate Seahorse 24, which he commanded in operations against the smugglers off the coast of Scotland.

In January 1755 he sailed to Virginia from Cork in the company of the Nightingale 22, Captain Dudley Digges, with a convoy of sixteen transports to arrive in the second week of March, and from where he returned to home waters with the departing commander-in-chief, Commodore Hon. Augustus Keppel, a passenger. He was rewarded with a profitable cruise off Ushant in the Eagle 60 that autumn from which he returned to Portsmouth in November. Continuing with the Eagle, from 1756 he served under Admirals Hawke, Boscawen, and Knowles off France, and in 1757 was attached to the Louisbourg expedition, whilst on 30 May of the same year he took the East Indiaman Duc d’Aquitaine 50 off Lorient when in company with the Medway 60, Captain Charles Proby.

In March 1758 Palliser commissioned the new Shrewsbury 74 in which he joined the Unicorn 28, Captain Thomas Graves, and the Lizard 28, Captain Broderick Hartwell, in the destruction of the French frigate Calypso in Audierne Bay on 12 September. After sailing for North America in February 1759 he served at the reduction of Quebec, following which his patronage of an able seaman, James Cook, resulted in that great explorer being promoted to the rank of master. From the summer of 1760 Palliser served in the Mediterranean under Vice-Admiral Charles Saunders, commanding a division that drove a French squadron from Toulon into Candia. In 1762 Palliser went out in command of a squadron to Newfoundland to recapture St. John s, but as this had already been achieved he returned to England and the Shrewsbury was paid off in March 1763. 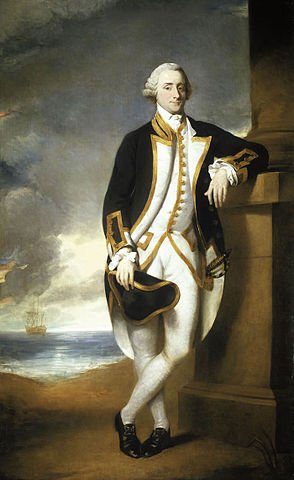 From April 1764 Palliser was a valued commander-in-chief and lieutenant-governor of Newfoundland with his broad pennant aboard the Guernsey 50, and with Captain James Chads commanding this ship from 1766. During this period he was praised for his efforts in attempting to implement the peace treaty with France, although he was obliged to act against French smugglers and to counter other outright French transgressions. He was also responsible for directing a detailed survey of the coast by James Cook. As was the custom he returned home each winter before sailing for Newfoundland again in the early summer, and due to the French antics his period of command was extended, so that he only returned home for the last time in November 1768, being invited to a conference with the King shortly afterwards.

In August 1770 the first lord of the Admiralty, Admiral Sir Edward Hawke, appointed Palliser comptroller of the navy, and on the occasion of the King s review of the fleet on 6 August 1773 he was created a baronet. In March 1774 he was appointed governor of Scarborough Castle by the King, and on 31 March 1775 advanced to the rank of rear-admiral and installed as a lord of the Admiralty, which necessitated him setting out for Scarborough to be re-elected as one of the town s MP s. Shortly afterwards he and the first lord, Earl Sandwich, set off on a whistle-stop tour of the southern dockyards including Woolwich, Portsmouth, Plymouth and Deptford. In December of the same year Lord North appointed him to the lucrative position of lieutenant-general of marines, quite forgetting that he had already promised the vacancy to Rear-Admiral Lord Howe, and creating no little amount of resentment in that officer.

In 1776 Palliser s plan for the relief of Quebec was accepted and successfully implemented by Captain Charles Douglas, who arrived off that beleaguered town on 6 May 1776.

Promoted vice-admiral on 29 January 1778, Palliser joined the Channel fleet in March as third-in-command to his old colleague Admiral Hon. Augustus Keppel, flying his flag aboard the Ocean 90, Captain John Laforey, whilst the fleet assembled at Portsmouth. Later shifting his flag into the Formidable 90, Captain John Bazely, he fought at the Battle of Ushant on 27 July, where prior to the action most of the ships of his division received a signal from Rear-Admiral John Campbell, the captain of the fleet, ordering them to make more sail. Palliser s efforts in the engagement were afterwards marked by a lack of support of his commander-in-chief, even though it was seen that he fought well. Keppel seemed happy initially with Palliser s conduct, and the fleet proceeded to blockade the French at Brest in a perfect accord, but soon the newspapers accused Palliser of ruining the chances of a victory through his failure to support Keppel. When Palliser demanded that Keppel sign a paper condemning these remarks the senior officer refused, resulting in Palliser demanding a court martial upon his senior which the Tory government supported, but which the service and public did not. When Keppel was justifiably acquitted before Palliser s prosecution, Palliser himself faced a court martial for insubordination, but despite public indignation which had led to his house being destroyed by the mob, he too was acquitted, although neither unanimously or honourably and at a personal cost of three thousand pounds. The fact that the ministry had ordered all the officers opposed to him to sea and recalled those who might show him favour at the court martial, including his own nephew, highlighted even more what the service thought of him. Vice-Admiral Hon. Samuel Barrington was conspicuous amongst many who refused to serve under him thereafter.

Palliser had resigned his offices pending the court-martial, and despite his request was not reinstated to any. However, as a reward for his loyalty to the administration he was found a safe seat in Parliament, and on the death of Admiral Sir Charles Hardy in May 1780 he was appointed governor of Greenwich Hospital. Here he remained after the change of government, despite Charles James Fox raising a number of motions to remove him, whilst at the same time his own supporters declared that in a time of crisis it was unacceptable that an officer of his experience and ability be kept ashore. An indication of the divisiveness he invoked occurred at the end of 1780 when it was reported that he had been deprived of the East Indies command by the refusal of the Secretary of State for the Colonies, Lord George Germain, to sign his commission. During 1784 it was again mooted that he might go out to India as the commander-in-chief but once more nothing came of it.

He was advanced to the rank of admiral on 24 September 1787, and during the Spanish Armament in 1790 he mustered all the inmates at Greenwich Hospital in the hope that he would find some who would be physically able to assist in moving ships to Chatham, Sheerness, Portsmouth and Plymouth. Personally however, he made it known that he would not accept a sea-going command. In April 1795 he received Princess Caroline of Brunswick at Greenwich on her journey from Cuxhaven to marry the Prince of Wales.

Palliser died at his estate in Vache Park in Buckinghamshire on 19 March 1796, apparently as a result of the wounds from his accident on the Sutherland in 1748, which had not only incapacitated him for many years but had possibly provoked his unaccountable behaviour in 1778. He was buried at Chalfont St. Giles and was succeeded in his baronetcy by his great-nephew, Hugh Palliser Walters.

A single man, he had one illegitimate son, George Thomas, who became the naval storekeeper at Halifax, and whose removal by commodore Sir Charles Douglas was instrumental in that officer s recall in February 1785. There was no doubt that Palliser was a capable and brave officer, but his support of the unpopular Tory ministry of Lord North led to his manipulation by the first lord of the Admiralty, Lord Sandwich, who used him as a tool to attack the Whig Keppel. He was a fine administrator who worked well with Lord Sandwich, spoke for him in the Commons, and stood by him in various political crises. His humble birth counted against him in terms of style, education and behaviour and perhaps resulted in his being easily offended. Admiral Earl St. Vincent thought well of him despite their conflicting political views and the fact that he was seen as the Earl of Sandwich s right-hand man.

In 1775 he received approximately five thousand guineas, equating to about 750,000 in today s money, from the will of Admiral Sir Charles Saunders. Until 1773 he spelt his name as Pallisser. He was a friend of Captain William Locker, Captain Mark Robinson, and Admiral Samuel Goodall, and prior to their disagreement in 1778 had been on good terms with Keppel, with whom he had been a joint beneficiary of Saunders will. He was also an early and long-standing patron of James Cook, to such an extent that he erected a monument to the great explorer s memory in his estate at Vache Park. He was the M.P. for Scarborough from 1774-9, having offered himself for election but then declined a contest in that town two years previously, and was later the M.P. for Huntingdon from 1780-4.